WILL CHINA OCCUPY BHUTAN AS IT DID IN TIBET? 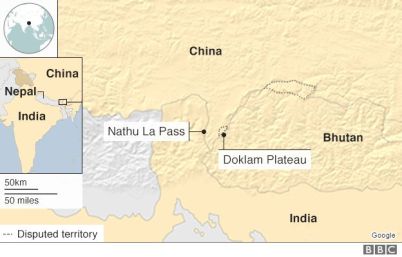 The standoff between India and China about Doklam is said to have been sorted out. India claims that it has stood against China with dignity and determination, in spite of many provocative statements from China and resisted China’s attempt to enter Doklam. India further says that China will stop construction of the road in Doklam area.

However, China is trying to give an impression that India has panicked due to its aggressive stance and India has been taught a lesson. China continues to say that its claim on Doklam is intact and it has not changed its stand.

While tension in the Doklam continued for several weeks, it is obvious that neither China nor India wanted a military conflict. Apparently, China intends to create an atmosphere of tension and scene of confrontation with India, as part of its long term strategies of overwhelming countries in Asia, expand its territory and emerging as unquestioned and undisputed dominant country in Asia.

China’s aggressive stance in Doklam is part of its continuing practice of waging confrontation in one area or the other in Asia. The doklam conflict was preceded by China’s claims about the South China Sea and dispute with Japan on Senkaku Island. Even while adopting such aggressive stance, China has been untiringly putting forth efforts to economically dominate smaller countries like Pakistan, Nepal, Bangladesh, Sri Lanka, and Maldives in Asian region which is another face of China’s aggressive approach to dominate Asia.

Every Asian country now thinks that China is a big bully that they have to guard against. However, they have not taken any initiative so far to assert their position and safeguard their interest against domination by China and such attitude of the Asian countries is only giving confidence to China that it can browbeat all Asian countries at its will.

China has been occupying Tibet for six decades now, and the world has just closed its eyes to China’s aggression in Tibet and suppressing the freedom loving Tibetans. The next target for China is Arunachal Pradesh region in India on which it has made a claim. So far, China has not shown any inclination to enter Arunachal Pradesh by force, but one need not be surprised if China would attempt to do so in future.

Many observers suspect that China creating tension in Doklam and creating a dispute with Bhutan is a deliberate try to find an excuse to enter Bhutan and occupy the country, as it has done in the case of Tibet. While India has an agreement with Bhutan to defend Bhutan, China may risk a war to annex Bhutan. It appears that China has strong faith that the world opinion is impotent and the USA and west European countries facing multitude of problems on various front, would not take any tangible measures to prevent China entering Bhutan, though they may take some cosmetic steps like passing a resolution to condemn China in Security Council of U N.

While several Asian countries face a threat from China economically or militarily, China’s threat to India is much more evident and seem to be immediate. Doklam incident is only an indication of the shape of things to come.

The Indian government is facing a complicated situation, as the country is making impressive growth in industrial and economic development and does not want to get bogged down in a military conflict with China.

In such circumstance, one cannot but remember the submissive attitude of the then British Prime Minister Chamberlain to Hitler’s Germany before the Second World War and his approach to solve the dispute with Hitler by placating him.

One hopes that Indian Prime Minister would be aware that any attempts to appease and please China to ensure peace in the borders would be a futile exercise if India would not be capable of giving befitting reply to China in the case of military conflict.

Possibly, foreseeing such grim possibilities, it would be appropriate for India to sign a firm military pact with the USA. If India has to pay some price for entering such military agreement, it would be a much lesser price than what it has to pay for remaining passive against confrontation by China.

India should not make the mistake of allowing China to enter Bhutan, as India did in the case of Tibet earlier, not confronting China when it entered Tibet several decades back.