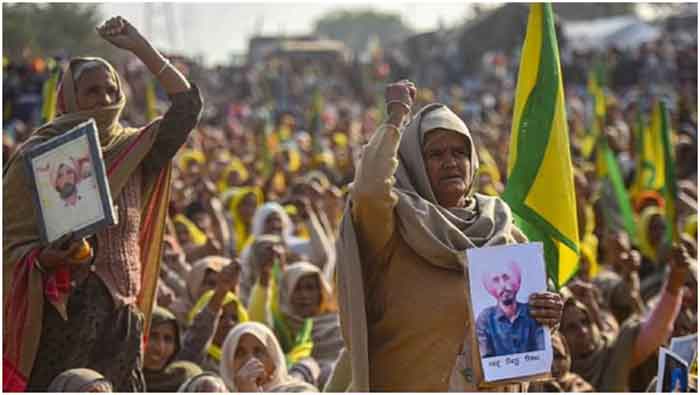 In the darkness of nights, the Hindutva fascists and their trained henchmen are trying to attack farmers’ protests and provoke violence with police help. The objective of the BJP government is to discredit the peaceful and democratic movements of the Indian farmers. All slanderous campaigns by the ruling classes against farmers’ movements have failed. But the days of Indian democracy look gloomy as the Hindutva fascists standing in defence of corporations and their pet project of establishing agribusiness in India. Indian farmers are fighting against corporatisation of agriculture and land grab by the big corporations to establish full-fledged agricultural capitalism in India. From their everyday experiences from the 1991 new economic reforms, the farmers have realized that all economic reform programmes were carried out to promote and protect corporations and marginalised the masses. This realisation has forced farmers to reclaim their citizenship rights over their own livelihoods and land by opposing the newly legislated agricultural black laws.

The bone-breaking north Indian cold, Hindutva threats, and police intimidation did not stop the farmers from continuing their protest against three laws concomitant with corporate interests. These agricultural reforms are detrimental to Indian farmers, particularly the rural and agricultural economy in general. The apathetic Modi led BJP government refuses to repeal these laws even after nine weeks of peaceful protests. Despite all nefarious strategies of misinformation campaigns, the Modi government has failed to contain the movement’s spread to different parts of the country. More people have joined the movement since it began.  The farmer’s protest movement has revived hopes of deepening democracy, solidarity, and peace across borders. The farmer’s movement is a new form of class struggle that breeds regional and international solidarity and moves beyond farmers’ immediate interests and their class interests. It inspires brotherhood and reclaims lost peace, democracy, and citizenship rights in a period of organized deception of Hindutva fascists.

Politically speaking, the farmer’s movement has provided much-needed energy and hope to otherwise resigned political opposition in India. The opposition parties have revived their hope that Hindutva fascists can be fought and defeated. The farmers’ movements have also produced a new generation of young leaders committed to secular democracy in India. The defiance of the farmer’s protests is mounting pressure on the Government of India led by Mr. Narendra Modi and exposed the naked foundation of Hindutva fascism and its relationship with capitalism. It has provoked international solidarity movements in support of Indian farmers. The solidarity protest movements in Australia, Bangladesh, Brazil, Canada, Indonesia, Sri Lanka, Nepal, Pakistan, Korea, New Zealand, Portugal, United States of America, United Kingdom, and in different parts of Europe have given a sense of internationalism. The farmers’ organisations and activists in Korea, Indonesia, Brazil, Portugal, Nepal, Sri Lanka, and Bangladesh have extended their solidarity with Indian farmers and demanded to roll back the agricultural reforms.

All Nepal Peasants Federation, the Korean Peasant League in South Korea, the Korean Women Peasant Association, the Indonesian Peasants Union, the Landless Workers Movement in Brazil, the Confederation of National Agricultural Association (CNA)from Portugal, National Farmers Union in Canada, the Land Workers Alliance (LWA) in the UK and the Pakistan Kissan Rabita Committee have followed the best traditions of internationalism by standing with Indian farmers movements. These solidarity struggles reinforce human values of interconnectedness in struggles for justice beyond territorial boundaries.

The solidarity protest movements in Pakistan supporting Indian farmers have planted new seeds of hope for regional peace and unity. It helps in healing the wounds of partition. The two warring governments and the religious lunatics of both these countries have failed to divide the working classes and peasantry. India and Pakistan’s farmers suffer from the same economic policies of liberalisation, privatisation, and globalisation. The farmers from both these countries suffer from corporatisation of agriculture that empowers large capitalist classes and causes land alienation. The cross-border unity and solidarity of farmers and workings classes can establish hopes for lasting peace, brotherhood, and democracy in India and Pakistan.  All the powers of Hindutva fascists in India and Muslim fundamentalists in Pakistan have failed to divide the working classes into religious and nationalist lines. The future of the India and Pakistan relationship looks bright in the future amidst the gloomy present.

Despite all odds, the ongoing farmer’s movements have helped revive the best traditions of the Indian freedom struggle that shaped Indian politics and its constitutional practice. The call for brotherhood, non-violence, communal, religious harmony, peace, unity, solidarity, inclusivity, secularism, and justice represent the best constitutional values enshrined in the Indian constitution. India’s idea based on unity in diversity is rejuvenated by the farmers and working classes of India to reclaim the republic and reinforce their citizenship rights granted by the Indian constitution.

The farmers’ movements uphold the best Indian tradition of Vasudhaiva Kutumbakam (the world is one family) that the Hindutva forces are destroying every day. The farmer’s movement provides formidable momentum to halt the forward march of Hindutva fascism in India. The democratic practice’s electoral expediency is not sustainable despite the money and muscle power of the Hindutva brigade. The farmer’s movement dragged Indian democracy where it belongs. The marginalised masses’ issues and their collective class consciousness will shape Indian democracy in the next decade. The farmers’ movements have contributed immensely to shaping the collective consciousness to deepen democracy, secularism, and India’s welfare state. Therefore, it is important to locate the wider impacts of farmers’ movements in India beyond territorial boundaries. These movements have helped to revive and inspire democratic struggles against capitalism to protect people and their planet.

India needs uninterrupted and continuous mass movements to safeguard the inalienable and universal nature of citizenship rights and democracy from the Hindutva fascists and market fundamentalists. The working classes, farmers, religious minorities, Dalits, tribals, and women are the best custodians of the Indian Constitution and its promises for an egalitarian, democratic, secular, and socialist India. The farmer’s movement is a great beginning to defeat all reactionary, patriarchal, feudal, and Brahminical Hindutva forces in India.