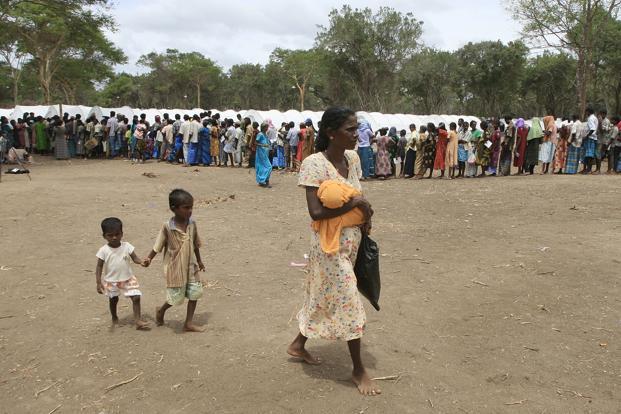 More than 100,000 Sri Lankan refugees continue to live in Tamil Nadu 30 years after the outbreak

of civil war caused them to flee across the Palk Strait. Photo: AFP

Last month, a Tamil Nadu government policy note tabled in the state assembly said more than 3,000 Sri Lankan refugees in India had returned home since 2015. A fraction compared to the nearly 1 lakh Tamils from the island’s one-time warzone still in Tamil Nadu — two-thirds of them in government-run camps.

From time-to-time, suggestions and specific proposals for repatriating refugees have been making news. In the past couple of years, the Narendra Modi government at the Centre has taken up initiatives to reach out to the island nation and come across as a strategic regional ally by building houses, starting an ambulance service and inking joint infrastructure development projects. But refugee repatriation remains a ‘work in progress’, probably due to the political, social and economic factors involved.

One of the main reasons behind reluctance of returnees is finding a livelihood in a country grappling with high inflation. Today, a family of four in the island nation needs at least a couple of thousands of rupees (Sri Lankan) a day to survive. Not long after the war, the Lankan government, spoke of 90,000 war widows among Tamils, possibly with children and elderly parents to support. The high cost of living in the country means those wanting to return home from India may find it difficult to get a stable job.

The continuing political mess that is Sri Lanka, accompanied by greater infighting within the Tamil National Alliance (TNA) ruling the Tamilmajority Northern Province, is not encouraging either. There is also the unsaid fear of a possible return of Mahinda Rajapaksa to the helm.

Prospective returnees are also worried over the slow progress in the identification and return of their land, and those people who stayed back, taken over by the armed forces during the war years. There is also greater ‘political concern’ about the continued presence of army camps in Tamil neighbourhoods, which the government had long ago said would remain like in the rest of the country.

Despite the relative comfort and peace of Indian refugee camps, a return to the homeland is the ultimate of most refugees. The international  community too associates the of the refugees to the real of the war-time climate in Sri Lanka. Among the many proponents of return of the refugees is S C Chandrahasan, founder of ‘Organisation for Eelam Refugees Rehabilitation’ (OfERR).

Son of S J V Chelvanayagam and Sri Lanka’s ‘Tamil Gandhi’, Chandrahasan has been all praise for the good work by governments in India in this regard. According to OfERR, people feel complete only when they are back in their homes, among the people they had left behind.

Lack of opportunities at home seems to have sparked a reluctance among refugees. It is also true that refugees, have been going back in trickles but there is also a fair number that has used the occasion to smuggle themselves out to a western country seeking political asylum as economic refugees.

To ensure proper repatriation, Colombo and New Delhi need to consider setting up industries in the waraffected areas to ensure job creation. It could begin with cottage industries that can function from home such as mat-making or small-scale hosiery units like the ones in Tirupur.

Thus far, there is little political enthusiasm from the dominant TNA and other Tamil parties in Sri Lanka, for the return of the refugees, especially those staying in India. There is also an unsaid apprehension about their large-scale return all at once upsetting the voter demography in Tamil areas. And despite perceptions to the contrary, neither the state nor the Centre is in any hurry to send back refugees to Sri Lanka.

If it were to happen on a large-scale, it would be at the government-to-government level, after New Delhi satisfies itself about its lasting concerns about political stability in Sri Lanka, and also permanent rehabilitation measures for returnees, including an amiable welcome from those who had stayed behind. The idea would be to ensure beforehand that the returnees would have no reason whatsoever to regret their decision, now or ever.