What If the Afghan Peace Talks Fail? 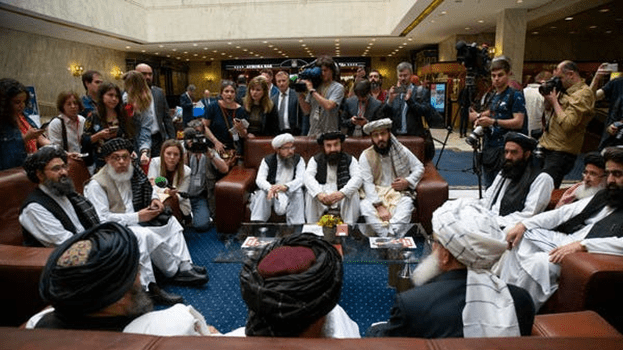 Historic face-to-face peace talks began between the Taliban and the Afghan government in Qatar last month. Both sides assert that they are sincere to find a political solution to the four decades of war in Afghanistan. At the outsets of the talks, Masoom Stanikzai, the Chief Negotiator of the Afghan government proposed “we will start introductions on the left”. Abbas Stanikzai, Taliban’s Deputy Chief Negotiator loudly said, “You always do things from the left, we mujahideen start from the right.” With these two phrases, the intra-Afghan talks began. The peace talks have been ongoing between the two parties behind closed doors. The Afghan government tries to include the Taliban under the current administration while the group calls the government illegitimate, installed by the US, and claims it does not represent the Afghan people.

Taliban believes that it has defeated the United States and after the US withdrawal from Afghanistan, the group will overthrow the Afghan government and will take over the country. Despite the US-Taliban peace agreement, in the first half of 2020, UNAMA documented 3,458 civilian casualties in Afghanistan. President Trump in his recent tweet stated that he wants to bring all US troops home from Afghanistan by Christmas. In the absence of the US troops, Afghans fear what next should the peace negotiations fail?

If the peace talks fail, it will have the following three consequences:

Afghanistan will become a new Syria.

With the US-Taliban peace agreement, the Taliban agreed to a reduction of violence and entered the intra-Afghan dialogue after the release of five thousand Taliban prisoners. If the talks fail, the Taliban will try to take over the power by force and will engage in a heavy fight with the national security forces of Afghanistan across the country.

Last month, Qatar based Taliban official told CBS News that US and Afghan governments have no plan B. Conversely, the Taliban’s plan A is a peaceful political solution, but their plan B is a military takeover, the official added. From the other side, it is being said the northern alliance thinks of confronting the Taliban if the peace talks fail. Last month, Tolo TV in an interview, questioned Amrullah Saleh, the first vice president of Afghanistan for distributing weapons in the north of the country to confront the Taliban. Saleh rejected the claims.

Taliban will not be able to take over Kabul in the presence of US troops. Washington has a bilateral security agreement with the Afghan government for supporting and strengthening the national security forces. However, it will heat the conflict in the entire country due to the Taliban’s high morale and bolster.

In addition, NATO will not be able to defeat the Taliban who are much stronger in the battlefield than before. Taliban is counting days to take over the country and overthrow the current government. Apart from this, the Taliban has also received international recognition and openly forged with the regional powers namely, Russia, China, and Iran.

Afghanistan will no longer be a priority for the United States.

US President Donald Trump began the peace process in July 2018 and appointed Zalmay Khalilzad as the US Special Representative for Afghanistan Reconciliation to find a political solution to the war in Afghan. By this, Trump aimed for gaining more votes in the upcoming US presidential elections. Post elections, the Afghan peace negotiations will no longer be Trump’s priority, if he wins the election.

In addition, the US government might believe it does not lose anything should the heat of conflict increase in Afghanistan. The US forces neither fight the Taliban since the Afghan security forces have taken security responsibility in 2013 nor will have casualties. Likewise, the US spending in the country has dramatically decreased from $107 billion in 2011 to around $52 billion in 2019. The spending will further decrease since the US troops will drop from 9,800 forces to 4,500 in November 2020. Therefore, the White House might believe Afghanistan should no longer be a high priority for Trump’s administration.

The country will turn into a hotbed of terrorism which will threaten the region.

The Islamic State Khorasan (ISK) was formed in early 2015 in Afghanistan. It will further propound its presence toward Iran and Central Asia. ISK is anti-Shia and Iran and regards Shia as infidels who have killed thousands of them so far. The group has deeply troubled Iranians with several attacks on their soil and has killed many Iranians. In September 2018, ISK attacked a military parade in Iran and killed 25 people including military officers. In June 2017, the group also attacked the parliament of Iran which killed 12 and injured 46 people. Should Iran not cooperate for a peaceful Afghanistan, Tehran will be targeted by the ISK’s expansion in the post-failed peace talks.

The growing Islamic States will also threaten Central Asia.  In a visit to Tajikistan, Alexander Bortnikov, the head of Russia’s Federal Security Service warned of ISK threats from Afghanistan and claimed that around 5,000 militants of ISK are redeployed to the north of Afghanistan, the south flank of Central Asia. Terrorists have conducted 19 attacks in Central Asia between 2008 and mid-2018, resulting in approximately 140 fatalities where ISK was involved in several of these incidents. Last November, 17 people were killed in an attack by gunmen said to be affiliates of the Islamic State on a checkpoint on the Tajikistan-Uzbekistan border. Moscow has concerns about the spillover of the Islamic State into Central Asia.

Not only the ISK, but more new insurgents and terrorists’ networks will also form. The United States invaded Afghanistan in 2001 where only Al-Qaeda was present. Now, there are over 20 different groups in Afghanistan engaged in fighting.

The Taliban and the Afghan government face-to-face peace talks is a historic opportunity for all parties involved to seize it for lasting peace. Otherwise, the consequences will be for all. The US should not abandon Afghanistan or else the country will turn into a hotbed for international terrorism, which might result in another 9/11. As far as the region is concerned, Afghanistan does not beg the neighboring countries for peace in the country. The countries of the region must play an active role for the sake of their own safety since they cannot be safe having an unstable neighbor. The failure will also have consequences for the Taliban which might not exclude Trump’s surprise tweet ordering Taliban leaders funnel from Qatar to Guantanamo.

Hashim Wahdatyar is a political analyst based in Washington D.C.
He tweets @hashimwahdat.