What Does the General Elections of 2018 In Pakistan for Minorities mean? 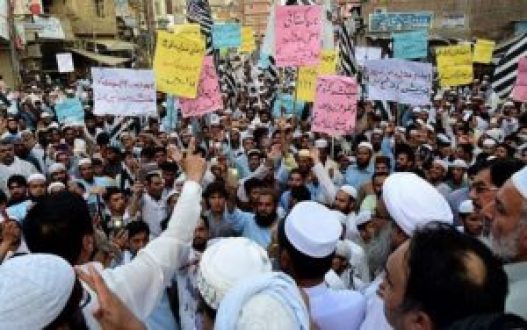 The Times of Israel. Activists from the Jamiat Ulema-e Islam party protest against alleged election rigging in Peshawar

Is there any hope for minorities after the general elections of 2018?

On the 25 July, the Pakistani nation took part in the general elections to choose their political representatives. More than 105 million people cast votes for 849 national and four provincial seats. Imran Khan’s party, Pakistan Tehreek-e-Insaf (PTI), got a majority of seats in the National Assembly to form the government, despite many major political parties blaming that the elections were rigged in favour of PTI. Many believe that Imran did not play fair as the establishment (the dominant power of the country) helped his campaign by intimidating the candidates of his competitor political parties. In his analysis, Heffrey Gettleman wrote in the New York Times on 27 July, “Mr. Khan, who has been on a quest for higher office for the past 20 years, was the favourite candidate of Pakistan’s powerful military. Human rights groups and many analysts have said that in the months before the election, military and intelligence officials threatened and blackmailed politicians in rival parties to defect to Mr. Khan’s side, clearing a path for his victory. Mr. Khan has denied this.”

By all standards, the elections were held in a controlled environment, and it is hard to say that they were free and fair. Five major political parties insisted that the elections were rigged. Their polling agents were intimidated and were not allowed to be present during the vote count. Many agents were not given the official copy of the results. Many urban constituencies’ results came very late. In those constituencies, Imran’s opponent parties were stronger. The Human Rights Commission of Pakistan (HRCP), an independent body, observed that some polling staff appeared to be biased towards certain political parties. In 2013, Imran did not accept the results of the elections. By month-long sit-in Islamabad, he tried to destabilise the government of Nawaz Sharif, former prime minister, and the leader of the party, Pakistan Muslim League-N, who ruled the country from 2013 to 2018. Khan did not attend the Parliamentary sessions but draws the salary an MNA regularly.

There was less competition for Khan as Sharif was in jail. The corruption cases against Sharif were heard by the courts on a fast track. So, his party ran the elections without him. Observers say that Mr. Sharif had disagreements with the establishment on many key issues, and he had challenged its hold on foreign and security policy. He tried to normalize relations with India and end support for Islamic militants in Afghanistan. That made both sides’ relationship bitter. The New York Times reported before the elections on 13 July, “Mr. Sharif has accused the military of pressuring the judiciary to act against him. When Sharif returned to Pakistan on 13 July to face jail terms, 1,000 police were deployed to stop his supporters to reach to the airport in Lahore. The police arrested many people before Sharif’s arrival and later opened criminal cases, even added terrorism clauses, against nearly 17,000 members of PML-N over breaking election rules.”

Two major liberal parties, Pakistan People’s Party (PPP) and Awami National Party (ANP), who had security threats and become the target of the terrorist groups, also complained of the interference of ‘some forces’ into the election process. Leader of the opposition in Senate and PPP leader Sherry Rehman suspected that members of her party were being forced to switch loyalties. The only political party which had a free hand was Mr. Khan’s party, PTI. Independent media analysts called it “systematic election engineering.” The HRCP showed its serious concerns over free and fair elections just 10 days before the polling day. Moreover, many extremist organisations, including Tehreek-e-Labbaik (TL), a newly formed far-right Islamist party, and supports Pakistan’s controversial blasphemy laws, won two provincial seats in Karachi, the biggest city of Pakistan. According to Daily Express Lahore, in 14 different constituencies, the party snatched PML-N’s votes and caused the defeat of Nawaz Sharif’s party. Some claim that the TL has the support of the dominant power centre. Many of these fundamentalist organisations have allegedly linked with terrorism, but they were free to run their election campaigns. Some senators raised voice against over 200 members of banned organisations who contested elections. According to the BBC, “The press was too cowardice to discuss the issue of why extremist groups have been given such protection and encouragement.”

Many of Khan’s critics call him ‘Taliban Khan’ because of his soft approach towards the Taliban, a brutal force that operates in Afghanistan and Pakistan, and his conservative agenda on many political, social, cultural and legal issues, including controversial blasphemy laws. From Khyber Pakhtunkhwa’s budget, where his port was in power, he denoted more than $3 million to the head of Darul Uloom Haqqania’s Sami ul Haq, who is notoriously known as the ‘father of Taliban.’  According to Washington Post, “Some called him (Khan) puppet of the military. Khan has often publicly praised the military but has denied any collusion.

Imran’s main slogan was anti-corruption, but near the elections, he accepted the same corrupt and discredited politicians in his party. Despite his all weaknesses, Imran is popular among the urban youth. Because of Imran’s influence, these young educated people had been using the social media in an indecent way. They fiercely promoted intolerance and hatred by using insulting and offensive language against Imran’s opposition parties. A senior journalist Imtiaz Alam called them abusive brigade. Imran’s interview on BBC (Hard Talk) before elections exposed him when he seemed helpless to answer many critical questions about national and international issues. On the other hand, Bilawal Bhutto, 29, son of Benazir and leader of PPP, seemed very confident when he appeared on various TV channels. The election manifesto of PTI proved that it is a less progressive.

Before the elections, the media was controlled by a months-long crackdown. Gul Bukhari, a senior journalist who was abducted for some time before elections, wrote in Aljazeera on 16 July, “In April, Geo TV was taken off the air, and its journalists were threatened. It came back only after its management reportedly agreed to all demands of the military. In May, the circulation of Dawn, Pakistan’s oldest and most-respected English-language daily newspaper, was blocked across the country. This came right after it published an interview with Mr. Sahrif in which he questioned the lack of progress in the trial of the alleged mastermind of the November 2008 Mumbai attacks, Hafiz Saeed – a sensitive matter for Pakistan’s security establishment.” However, military denied any involvement in the election’s process. Not only Muslims, but religious minorities too expressed their dissatisfaction on the elections process. According to Asia News, Several Christian organisations also expressed their disappointment of the election process. Catholic Bishop of Hyderabad Samson Shukardin says: “Some irregularities were observed and representatives of some parties were shoved away from the polling stations.”

In a controlled environment, religious minorities have less space to play their role in the national elections. However, it was the first time in the history of Pakistan that many minority candidates contested elections on a few general seats under joint electorates. For example, Sunita Parmer was the first a Hindu scheduled cast woman who contested on a general seat from Thar, Sindh province. Although, the winning chances of minority candidates were slim, contesting on the general seats showed that the joint electorates have given them space to enter into the national politics. As it is first time in the history of Pakistan, three Hindus from Sindh province were elected MNA and MPAs on general seats on PPP’s tickets, where the Muslim voters were 90 percent.  Many minority candidates will become the member to the National and Provincial Assemblies through the reserved seats through proportional representation.

Conversely, minorities have less hope for their future because a conservative government will run the country for the next five year. Even so, a few like the Church of England Bishop of Lahore Irfan Jamil hopes that the government of Imran Khan will take actions against hatred and mob violence against Christians. Only the time will tell that if minorities get a breathing space in their own land. Minorities (Christian, Hindu, Ahmadis, and others) make up just 4 percent of Pakistan’s 200 million population.