Was a painless demonetisation possible? 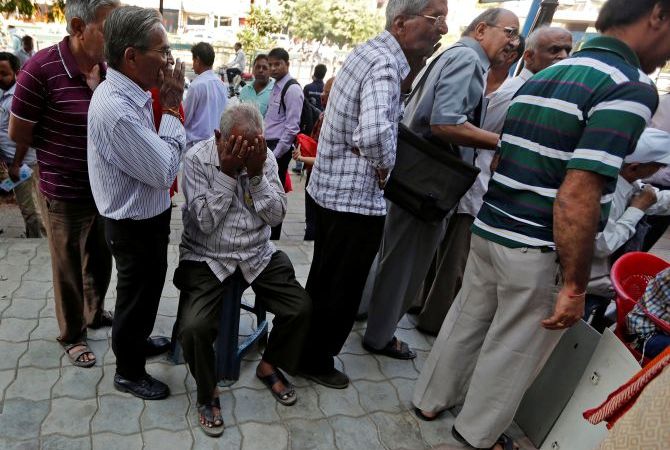 It’s been two weeks since Prime Minister Narendra Modi took the nation by surprise, announcing that Rs 500 and Rs 1,000 notes were no longer legal tender, it may be time to ask the simple and straight question: Was demonetisation without all this trouble and pain possible?

And that is without sacrificing any of the secrecy involved in the noble scheme, unlike what many pro-demonetisation groups on social media would want the rest of the world to believe.

The logic and methodology are plain and simple.

The government could have announced that new Rs 2000 bills would be in circulation in due course through banks, and ATMs across the country would be re-designed and re-calibrated to accept and dispense the same. It could have been the case with the new Rs 500 bills, too, maybe with lesser fanfare.

Better still, the government could have even considered replacing the old Rs 1,000 and Rs 500 bills with newer ones rather than introducing Rs 2,000 notes in the place of the former, thus adding to the avoidable yet continuing confusion on the ‘change’ circuit down to the last man.

Once it had all been done, and enough currency had been stocked in the Reserve Bank of India and State Bank of India vaults across the nation, then the PM could have announced the demonetisation.

The heavens would not have fallen, nor the earth shaken, as it has happened since. The secrecy, after all, would have been maintained, too, without all the confusion.

The question thus remains as to how and why PM Modi told the nation that banks and ATMs would be ready to exchange the new notes or dispense the same after a day’s break.

It would look as if the officials concerned had not done their homework, and have since made PM Modi, the nation’s tallest leader today, and the Government of India, look small.

The current demonetisation process may be next only to the nation’s general elections in terms of size, volume and complexities. In the case of the Indian elections, much preparation goes into it.

True, the ‘secrecy’ aspect of demonetisation required that the authorities did not have all the time and experience that the Indian electoral process has had. Yet, where systemic improvements needed incorporating, the scheme of secrecy could have waited some more time, though not abandoned completely.

Today, no one on social media and elsewhere is talking about 50 per cent of the total 14.5-lakh crore rupees in higher denomination currencies being surrendered as black money.

The government itself seemed to have targeted only Rs 3-4 lakh crore in the first place, going by some media reports. But whether accompanying reports of a consequent increase of 2-3 percentage points in the Gross Domestic Product at the end of fiscal 2016-17 is achievable is now being questioned.

So are the larger claims, some of them wholly unfounded and even un-argued by the government, that the cash component of the black money was higher than it actually is. Some have argued against such claims, pointing to previous government studies putting the figure at six per cent at the highest.

From the previous experience of 1946 and 1978, there are also those who argue that black money flows out of an attitude in this country, not otherwise.

While the present demonetisation has definitely flagged a ‘culture against black money’, the government should open up a national discourse and consequent policy formulation, to attack it all at the source(s).

If ‘name-and-shame’ would help, it should not digress — as is being felt in the case of those whose names from Swiss bank accounts have found their way to the Supreme Court, but in a ‘sealed envelope’.

But experience has shown that there is more to it all than name-and-shame. It’s a question of economics, politics and legal loopholes, rather than demonetisation per se.

Today, when the Modi leadership was seen as settling down to business after two-and-a-half-years in office, the politics of demonetisation — not in Parliament, but that which pinches the common man — could end up slowing down economic programmes, projects and processes.

Yet, the absence or lack of preparation on the demonetisation front, and questions since about the ultimate benefits of the same to curbing black money and developing economy, have possibly opened a first chink in Modi’s armour.

It’s not just demonetisation, per se. Possibly in future negotiations over wages and other benefits, nationalised bank employees and other sections of central government employees may demand their benefits. After all, they had stood by the government during these great and unprecedented days and weeks of national crisis, putting in long hours, extra days and the like.

The impact of the government yielding to them on the economy is one thing. The negative impact of not yielding on their morale could tell a different story, over the medium and the long terms.

‘Collective bargaining’ is the name of the game, and various interest groups, going beyond bank employees and investors and farmers, could all demand more.

It could be more so in the case of the ruling Bharatiya Janata Party’s traditional ‘trading community’, which had been backing the party from when it was still in its Jan Sangh avatar.

Thus far, the pro-Modi voters, cutting across social and economic strata, have lived off aspirations and expectations, flowing out of a sense of desperation and despondency. Possibly, it would not be the same any more.

At the same time, whether further subsidies would help in political and electoral terms is the question that the leadership should be asking itself.

There is nothing thus far to suggest that the Modi government’s claims to opening new bank accounts in crores, depositing direct benefits in individual bank accounts in thousands of crores, enthusing individuals to surrender cooking gas-subsidies/connections in lakhs, have translated into ‘new votes’.

There is nothing to suggest that it would happen now, if in its current mood of demonetisation-driven re-look, the government bends backwards to accommodate the common man ‘even more’.

It’s a policy dichotomy that the Modi leadership may now have to grapple with than it might have been willing to and had anticipated before demonetisation.