VOICES FROM THE HUSHED CORNERS: MANUAL SCAVENGERS IN COVID-19 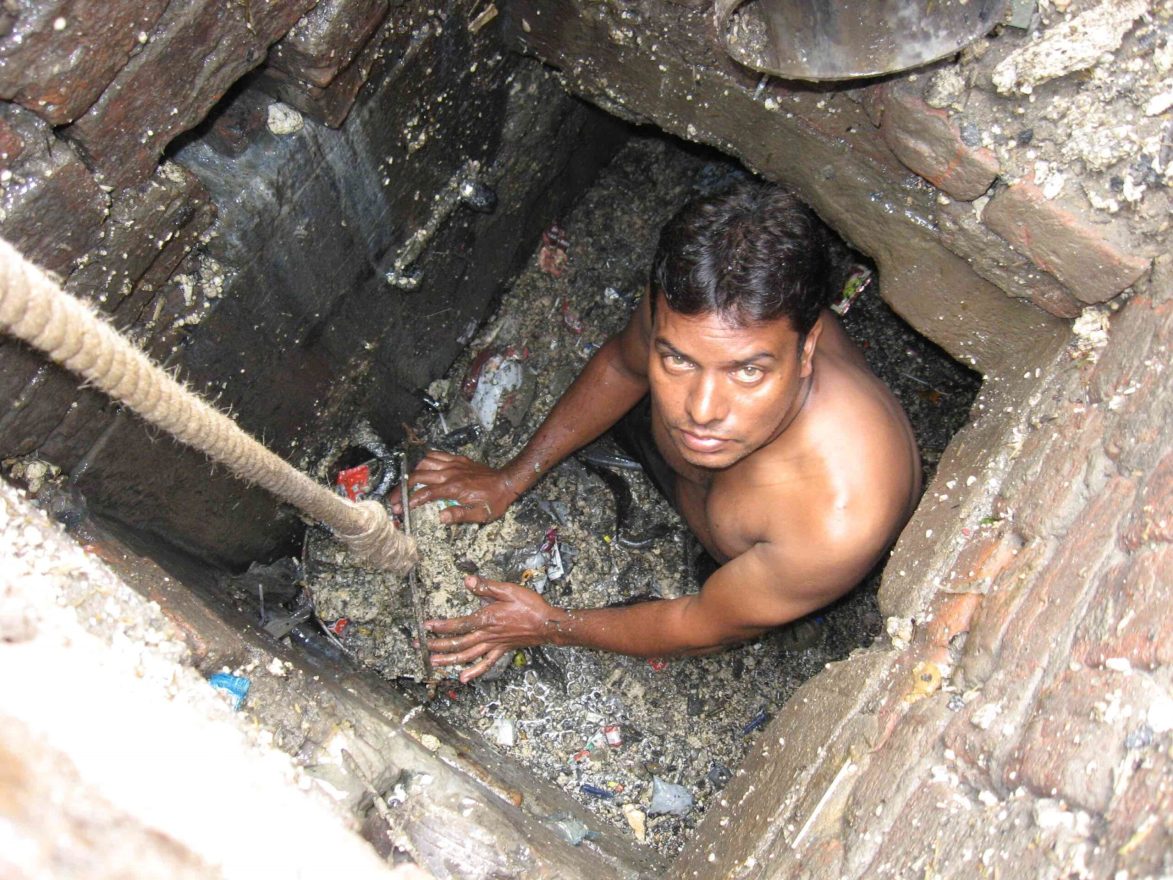 “If the misery of the poor be caused not be the laws of nature, but by our institutions, great is our sin”

As the world battles with a pandemic crisis, different sections of the society will have a different story to tell in the future about their fight with this deadly virus. The social hierarchy in India, which is the longest-serving hierarchy system in the world, has created stratification because of which many vulnerable communities have been forced to form. One such community of people, who are considered devoid of ritual purity, are engaged in the extremely undignified work of manual scavenging.

The government has given due support and credit to the medical fraternity as they have taken up the job of an army against the virus, but despite protecting people from various diseases for decades, the workforce in sanitation has always remained out of sight of the government. And it is now more than ever that they need due acknowledgment of their work, and measures to be taken for their safety as they still continue to dip into the filth of the entire society – barefoot, gear-less.

THE EXISTING LAWS AND THEIR DEEMING FICTION OF PROTECTION

In 1993, the Employment of Manual Scavengers and Construction of Dry Latrines (Prohibition) Act was passed. The first time an initiative was taken up to protect the basic human rights of the people who go through a traumatizing episode to save the lives of many. But the harsh truth of the incapacity of this enactment is markedly reflected from the definition of ‘manual scavenger’ that was provided in it. It failed to include so many forms of scavenging activities that it existed as a dead-letter law for years.

A broader and reformative view was put forth by the Prohibition of Employment as Manual Scavengers and their Rehabilitation Act, 2013, as it aimed at the rehabilitation of the people involved in this work. Though it created certain necessary obligations and stricter penalties in case of its violation, it failed to provide a sufficient definition of a manual scavenger. The phrase “before the excreta fully decomposes” excludes the sanitation workers whose work does not fall into the ambit of this phrase. In addition to it, workers who are given protective gear are not considered manual scavengers. But the Act failed to define protective gear and setting a standard for the same. An ill-equipped gear, which fails to provide absolute protection to the worker, would in reality bar the worker to take the aid of this Act. Mostly, they are given torn gloves and masks, or ill-sized boots in the name of gears.

The Supreme Court has also stated that no person should enter into the sewer line and septic tanks, but in case of emergency, a person may enter after taking necessary precautions. This shows the deficiency in the law and how the gaps are wide enough to allow the persistence of the menace. The major part of the workers are unaware of these provisions and people who are at an authoritative position, know how to use this to their advantage.

LACK OF ACTION ON PART OF THE GOVERNMENT

In July 2020, the World Health Organization through its Interim Guidance emphasized the necessity of providing proper training and access to Personal Protective Equipment (PPE) to the sanitation workers. The existing evidence base of the WHO suggests that because the viral fragments could be passed through the faecal matter, it is imperative to treat wastewater in a well-designed plant. Much to the dismay of the sanitation workers, no effective steps have been taken in this regard, and so they are still made to handle waste, without any gear, in untreated water.

The government proposed an insurance scheme for frontline health workers combating COVID-19 in Government Hospitals and Health Care Centres. The seething indifference for the sanitation workers who are not even given PPEs, and the apathy with which the government has chosen not to extend the insurance cover to them, proves how pushed out they stand from the social hierarchy.

THE PLIGHT OF MANUAL SCAVENGERS IN INDIA

Article 17 of the Constitution of India, an absolute right, seeks to abolish untouchability. But there is no denying to this fact that manual scavenging is an inherent form of untouchability. They live in socially exclusive groups, usually on the outskirts of the society or far away from that residential population whose waste they handle and dive into for a livelihood. This form of employment is a by-product of the caste system. The Discrimination (Employment and Occupation) Convention clearly mandates India to eliminate caste-based occupations. But there are no steps taken in this regard. In fact, there are layers to the involvement in this sphere. Not every backward caste or poor worker does this work. The Dalits are made to carry the burden of the entire society’s waste.

The Universal Declaration of Human Rights defines discrimination as any distinction which results in impairing opportunity or equality. The second layer concerns with women forming a larger part of the sanitation workforce, but they receive lesser income for the same work. This adds to the stigma of an already demeaning job. The Equal Remuneration Convention and Discrimination Convention of the International Labour Organization create an obligation to grant equal pay. Article 38(2) of the Constitution of India also promotes the concept of ‘Equal Pay for Equal Work’. But despite a plethora of legal principles at both national and international levels, no sincere efforts have been taken in this regard.

The biggest breach is of Article 21 of the Constitution. This occupation is devoid of any dignity and causes mental and physical ailments. The right to live with dignity is one of the most fundamental rights which should be granted unquestioningly. In the time of this global health hazard, where stepping out without a mask is like tracing steps on a battlefield, the glaring indifference given to these people is crestfallen. In the review petition to the judgement in Subhash Kashinath Mahajan, the Supreme Court speaking through Arun Mishra, J. stated,

“In no country in the world, people are sent to gas chambers to die”

This statement is the truth of the current situation where the government’s ignorance could increase the death rate by a thousandfold. It should be noted at this point that this is not a matter of choice. This is the result of a social structure derived from the customs of a religion that considers a segment of the society as outcasts. They are systematically excluded and made to work in sanitation. The social stigma that clings to their work prohibits them from entering into other fields. Consequently, a systematically forced labour condition has surfaced which manifestly infringes Article 19(1)(a) of the Constitution of India.

WHAT CAN BE DONE?

The need for manual scavengers exists fundamentally because of the faulty tank and sewer designs, dry latrines, open defecation sites, open railway tracks, etc. The existence of toxic gases and pathogens leads to various health hazards. The government should consider building well-designed tanks with the availability of mechanisms that can treat the wastewater. This can be an effective way for their rehabilitation. In the past, various international organizations like the United Nations Development Programme have partnered with civil society groups and training centres. They helped various women to make a living after rehabilitating them from the manual scavenging occupations. The government can launch training centres for both men and women to facilitate a better life for them.

There is a need to include all the manual scavengers into formally recognized organizations. The workers should be given proper training and equipment. In Hong Kong, a sanitation worker goes through two years of extensive training and needs to acquire 15 licenses. He is also given full-body suits with attached oxygen cylinders. This should be implemented by the Indian government as well. Another step could be taken in respect of raising the rate of remuneration. A paltry sum is given to the workers for the hazardous risk they take with their lives. Women are paid even less. The state governments should set a higher rate which safeguards a decent livelihood for the workers.

During this emergency situation, there is an absolute need to use technology for this purpose. In this regard, steps have already been taken. In 2019, the Greater Hyderabad Municipal Corporation (GHMC) procured a robotic manhole desilting machine – Bandicoot. The State governments shall make investments to deploy these robots and curb the evil of human degradation. The pandemic also calls for a proposal of insurance schemes for these workers. There should also be the deployment of protective gear and weekly medical check-up facilities.

At last, the Act needs to be amended. The definition of manual scavenger shall be made more inclusive. The protective gears need to be given a standard definition and the State and Central governments shall be mandated to comply with it. The Act shall also include provisions to uplift women to eliminate the stigma attached. There shall be an establishment of a committee constituting people from interdisciplinary fields and the workers so that they can formulate recommendations for their upliftment.

The author is a law student at the Faculty of Law, University of Delhi