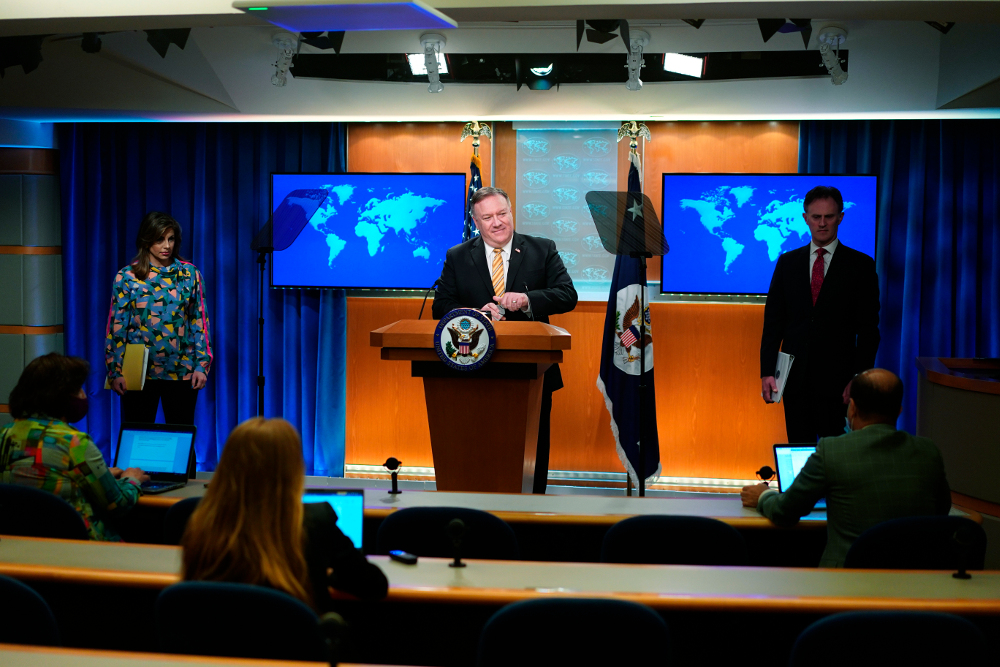 South and Southeast Asian nations were among international partners that the U.S. State Department praised Wednesday for efforts last year to help counter threats from Islamic State (IS), al-Qaeda and other militant groups as it released its annual terrorism report.

Secretary of State Mike Pompeo spoke specifically about the overthrow of IS.

“The Defeat ISIS Coalition has – remains strong.  It has completed the destruction of the so-called physical caliphate in Iraq and Syria,” he said, using another acronym for the Islamic State.

The report nonetheless highlighted American government concerns that militants were using regions in Thailand and Malaysia as transit points while traveling to other destinations after the fall of the caliphate in March 2019.

The report also delved into concerns about terrorist safe havens in and around the Sulu and Sulawesi seas as well as the southern Philippines.

“The United States and our partners made major strides to defeat and degrade international terrorist organizations,” Ambassador Nathan Sales, the State Department’s counter-terrorism coordinator, said in the foreword to Country Reports on Terrorism 2019.

“Now we are taking the fight against ISIS and al-Qaeda affiliates around the world,” he told reporters in Washington.

But the report pointed out a weak spot in Thailand.

“Thailand’s principal vulnerability to international terrorism continues to be as a transit and facilitation hub, given the high volume of travelers through Bangkok’s main airport and available market of illegal goods,” it said.

The report praised the Southeast Asian nation for its record in having no attacks attributed to transnational terrorist groups last year. Violence, for the most part, was attributed to “ethno-nationalist” insurgents in the Deep South, according to the report. It said the number of attacks in 2019 was the lowest since the separatist insurgency had resumed in 2004.

Last week, Thailand’s chief peace negotiator told BenarNews that he hoped to resume direct talks with southern Barisan Revolusi Nasional (BRN) rebels in July or August, after the Malaysia-brokered talks were disrupted by COVID-19 lockdowns in the neighboring countries in mid-March.

In its country report on Malaysia, the State Department raised a concern similar to the one about Thailand.

“Although there were no ISIS-affiliated attacks in Malaysia in 2019, the country remained a source, a transit point, and, to a lesser extent, destination country for terrorist groups including ISIS, [the] Abu Sayyaf Group (ASG), al-Qaeda and Jemaah Islamiyah,” it said, referring to the two international and two local militant groups.

A separate section of the report focused on terrorist safe havens, including the sea region that separates the southern Philippines from nearby islands in Malaysia and Indonesia.

“The government of Indonesia conducts monitoring and surveillance of suspected terrorist cells in its territory, but acknowledges that a lack of resources hinders its ability to monitor maritime and remote parts of Indonesia, including the Sulu and Sulawesi seas,” it said.

The State Department lauded Indonesia, along with neighbors Malaysia and the Philippines, for using their militaries to coordinate patrols in the seas to deter and prevent kidnappings and terrorists from using it as a transit point.

“The Government of Malaysia sustained efforts to counter terrorist use of the Sulu/Sulawesi seas as a safe haven by working with Indonesia and the Philippines to prevent the flow of FTFs (foreign terrorist fighters) through its territory,” the report said.

The State Department supported the Philippine government for tracking terrorist groups, particularly in the southern region as it deepened already close cooperation with the U.S. military in 2019 to address terrorist threats.

“Although the Philippine government possesses the political will to apply security measures against terrorist threats and has consistently partnered with the United States and other nations to build the capacity to do so, it struggles to apply a coordinated whole-of-government approach to prevent terrorism,” it said.

“The continued ability of terrorist organizations to operate in the southern Philippines reflects the centuries-long challenge of governing effectively in the country’s more remote areas and establishing consistent security in a region characterized by a strong separatist identity, endemic poverty, and religious differences,” the report added.

Bangladesh saw a small increase in terrorist activities in 2019, the report found, pointing to six improvised explosive device attacks claimed by IS, including five aimed at police between April and November. The attacks resulted in several injuries but no deaths.

“As in prior years, the Bangladesh government denied that Bangladesh-based terrorists have meaningful ties to transnational terror groups, including ISIS,” it said.

The report noted that Bangladesh’s criminal justice system was still in the process of fully implement the Antiterrorism Act of 2009 last year while a special tribunal authorized under the Act had sentenced seven men to death for their supporting roles in a 2016 terrorist attack at a café in Dhaka that left 20 civilians and five militants dead.

Islamic State, through its propaganda unit, claimed responsibility for the overnight siege at the Holey Artisan Bakery café, the deadliest terrorist attack in Bangladesh’s history as a nation. The attack was carried out by Neo-JMB, a pro-IS Bangladeshi militant group.