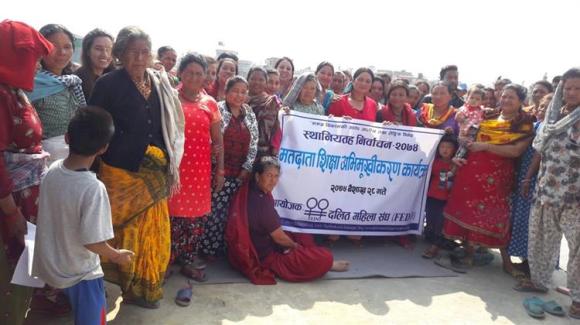 There are two classes of people in Nepal, one is the upper castes and class, which is high and forward, and another is the indigenous or rearward group — all those other than the people of the upper caste. The majority of difﬁdent communities come from the population of indigenous groups under backward group. The forward castes Brahmin, Kshatriya including Vaishnava have social and economic rights, which the many indigenous, Sudra and the Dalits (untouchables) did not have.

Predetermined circumstances like gender, caste, race, place of birth, family origins and the social groups of a person should not help determine people’s status but these circumstances have great support of the people and happen on a widespread scale not only in Nepal but it is a chronic problem in most of the South Asian nations.
Untouchability remains a curse in most of the rural areas and if it is a Dalit and a woman, the level of mistreatment is two-fold. The standard of awareness is low; people still believe that allowing a Dalit inside a house will bring bad fortune.

Dalits are considered, the discriminated and oppressed communities, suffer from the restriction on the use of public amenities, deprivation of economic opportunities, discriminated in the religious and cultural spheres, and general neglect by the state and society.

One estimate puts the number of Dalit people at 13.09 % out of the total population in Nepal. Among them, women, children, the disabled and the elderly are more vulnerable. Poverty and oppressed communities have some linkages, but they are different status in the society. Poor people other than untouchable are better in society. Poor people have been excluded only based on their economic conditions, but the Dalits are excluded socially, culturally, religiously, economically and politically as well.

However, there are laws for equal participation, equal rights, and non-discrimination for all oppressed communities but in practice, positive changes are rarely taking place in the society. But the recent local level polls in Nepal has brought some noticeable revolutionary shifts in the political rights of the women, and it is bringing a significant increase in the representation of women especially Dalit women.

The local level election bill of Nepal makes it mandatory to field the candidacy of at least one woman either for the post of chief or deputy chief at village councils, municipalities and district coordination committees.
The bill also includes a mandatory provision on electing at least one Dalit woman in the post of ward committee member.

Likewise, the local poll bill has reserved four seats for women and two seats for candidates hailing from the Dalit or marginalized communities in the village councils. In the case of a municipality, five seats have been reserved for women and three for Dalits or the marginalized, while the number is at least three in the event of the district coordination committee.

During recent local government polls, thousands of Dalit women have been elected to the local bodies, which has been a great achievement in the history of gender equity and bringing Dalit women in the political mainstream.

For the first time, the Dalit women campaigned and contested in local polls in such a substantial number. In most of the places, it was very challenging and arduous for them to ask for votes especially with higher castes in the society. They faced discrimination from the so-called upper caste people while conducting door-to-door canvassing for votes.
Campaigning to some of them has been a humiliating affair because they are openly prohibited from going to the households belonging to upper castes in their wards. They feel disadvantaged compared to other candidates who are receiving friendly treatment from the voters.

There is still a lot to be done to end the rampant discrimination against Dalit and women. Introducing a policy at the center and trying to implement its ground level is not going to change the people’s attitude overnight. Its solution requires a combination of action on the part of these communities, the government, and the political parties. However, the mandatory provision to elect Dalit women in the local administration is a good start.

Dalits have a lower social network, limited access to better jobs and opportunities. Socially excluded these groups must follow the dominant group’s value system. When a crisis occurs, they can be costly for them. This election is only a beginning, still greater equity, more efﬁcient economic functioning, reduced discrimination, more excellent support and better institutions with dynamic beneﬁts are needed for these disadvantaged groups.

Many Dalit women, who have contested and became successful in local polls predict that there would be remarkable changes in the rights and status of the Dalits after they enter in the local governments. Furthermore, they are confident that Dalits finally being inducted into mainstream politics and now will get more respect in society.