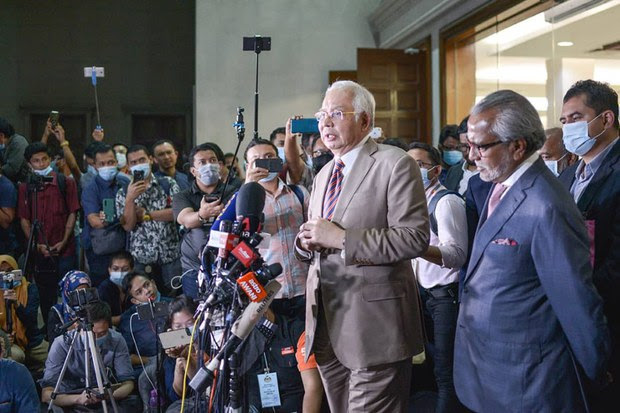 Malaysia dropped from 57 to 62 in the corruption rankings of 180 countries by TI, while neighboring Thailand went from 104 to 110. The Philippines fell two places to 117, while Bangladesh, the second lowest-ranked nation in South Asia, dropped one place to 147.

Only Indonesia, Southeast Asia’s largest country, which is notorious for deep-seated corruption in the public sector, performed better this year, climbing six places to 96.

“Peoples across Asia-Pacific have led mass movements calling for action against corruption, but little has changed in the last 10 years,” Ilham Mohamed, Transparency International’s regional adviser for Asia, said in a statement announcing the report.

“Instead, populist and autocratic leaders co-opt anti-corruption messaging to stay in power and restrict civil liberties to stop people from taking to the streets.”

Since 1995, Transparency International has compiled its annual Corruption Perceptions Index, ranking countries and territories by their perceived levels of corruption in the public sector on a scale of zero – meaning highly corrupt – to 100 – which means being free of corruption.

“A concerning trend across some of these nations is a weakening of anti-corruption institutions or, in some cases, absence of an agency to coordinate action against corruption,” the report said.

TI’s report drew links between the COVID-19 pandemic and corruption, saying many Asian governments responded by rolling out large-scale economic responses, which “conducted without adequate checks and balances, inevitably lead to corruption.

“Wrongdoing in emergency procurement has led to price inflating, the theft of medical supplies, and sales of counterfeit medicines and materials. This left many citizens more vulnerable to COVID-19 – and almost certainly cost lives,” it said.

TI ranks nations from 1 (best) to 180 (worst) based on their scores. The higher the score, the better the ranking.

Since taking office in 2016, Philippine President Rodrigo Duterte has been cracking down on freedom of association and freedom of speech, making it harder to speak up about corruption, the watchdog said. Duterte will leave office following the May 9 general election.

“In 2020, it was the country with the second-highest number of murdered human rights defenders, with a total of 25 deaths,” TI said.

Meanwhile, countries including Malaysia and Indonesia, which are stuck in the middle of the index, “face a more complex challenge: grand corruption,” the report said.

“This is the abuse of high-level power that benefits the few at the expense of the many, and which can destroy whole sectors, create recessions, and end democracies,” it said, adding, “In such cases mere technical interventions, useful in addressing petty corruption, are not enough.”

Malaysia has been battling government-corruption scandals for years, including the alleged embezzlement of billions of dollars from the state development fund 1MDB that brought down Najib Razak, the former prime minister.

In July 2020, a Kuala Lumpur court convicted and sentenced Najib to 12 years in prison on abuse of power and other charges linked to SRC International, a subsidiary of the state fund. He is appealing that ruling but is also standing trial on charges linked to the alleged theft of at least $4.5 billion (18.8 billion ringgit) from 1MDB.

“The situation we are in is deeply worrying and will be difficult to turn around unless the government takes decisive and affirmative action to accelerate the institutional reforms,” Muhammad Mohan, TI’s chief for Malaysia, said Tuesday while presenting the index.

“There has also been an acquittal or a discharge not amounting to an acquittal to high-profile personalities in several corruption cases with no clear clarification from the Attorney-General’s Office, and there is also no closure yet on the two high-impact cases to the country – the SRC International and the 1MDB case,” he said, referring to cases against Najib and others.

The Malaysian Anti-Corruption Commission said it was “giving serious attention” to the report, noticing “a downward trend.”

The leader of Malaysia Crime Watch, meanwhile, said the government should take steps to improve the nation’s standing.

“Malaysia’s further drop in the CPI is not something that we should be proud of,” said Jais Abdul Karim, president of the not-for-profit group, using an acronym for the Corruption Perceptions Index.

In Indonesia, a researcher at the Center for Anti-Corruption Studies at of Gadjah Mada University said the nation’s six-point improvement in the rankings from 102 in 2020, to 96 last year, is not significant.

Researcher Zaenur Rohman pointed out that both figures are worse than the 85 ranking in 2019.

The one-point improvement in the country’s score “amounts to stagnation,” he told BenarNews.

“It’s fair to say that Indonesian business executives have seen improvements. But many aspects are in decline, including democracy.

“Declining democracy means less oversight,” he said. “President Joko Widodo must demonstrate his commitment to eradicating corruption … with clear and measurable programs,” including “law enforcement reform and support for legislation to combat corruption.”

Elsewhere, Bangladesh’s score has been stuck at 26 for the last four years, “which is very unfortunate and shameful for the nation,” said Iftekharuzzman, executive director of Transparency International Bangladesh. The nation’s rankings fell between 146 and 149 during those years.

“It is disappointing. The reason behind it is the failure to transform high-profile anti-corruption pledges into reality,” he said, adding “the government’s zero-tolerance policy toward corruption … remains only [on paper].

“A section of those who are supposed to eradicate corruption are themselves involved with corruption,” he said.

Ghulam Rahman, former chairman of the Anti-Corruption Commission, said there was no doubt that the top government officials want to curb corruption, but “on the ground, the scenario is different.

“Preventing corruption by ACC alone is not possible. All the authorities concerned should be functional to make the country corruption-free,” Rahman said.

Bangladesh Law Minister Anisul Huq told BenarNews that he had not seen the report and would not comment.

Nisha David in Kuala Lumpur, Tria Dianti in Jakarta, and Ahammad Foyez in Dhaka contributed to this report.