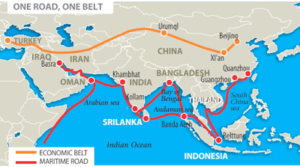 Pakistan’s newspaper Dawn reported a detailed report of Long Term Plan on CPEC concluded in the recent OBOR Summit held in Beijing which has raised many concerns about the project. It is said, this plan is not the project document, but it delineates the aspirations of both sides. In short, it laid out associated projects which would have long-run impacts on Pakistan’s surveillance, agriculture, tourism, transportation, and finance and security situations. The LTP of CPEC has following salient dimensions;

First, thousands of acres of agricultural land would be leased out to Chinese companies to set up demonstration projects ranges from irrigation technology to seed varieties.

Second, there would be a surveillance system crossing cities across the country with 24-hour video recording on roads and in market places and data will be sent to the command center.

Third, national fiber-optic would be laid for the internet traffic as well as the terrestrial distribution of broadcast television. Chinese media would cooperate with Pakistani broadcasters in the broadcasting the Chinese culture in the country.

Fourth, there would be industrial parks or special economic zones hosting Chinese firms operating in textiles and garments, cement and building materials, fertilizers and agricultural technologies.

Fifth, there would be a coastal tourism industry in the south includes cruise ports, nightlife, water sports though more work is needed to be done.

Free and low-interest loans issued to Pakistan to be given out as the project gets under way.

Lastly, the plan asks for the visa-free tourism possible with China to provide more convenient policy support for Chinese tourists to Pakistan without any reciprocal arrangement for Pakistanis.
At first glance, it is little to appease Pakistan. Many see this is the China’s colonialism approach towards Pakistan. Let it be clear that it is not colonialism that China cannot take over the country as stable Pakistan is very much important for China in Belt and Road Initiative. Nations cooperate with each other to pursue their national interests in this anarchical international environment so Pakistan must be aware of protecting its sovereignty and its national interests. This is an economic project started commonly with the infrastructure, energy, industry.  If the long-term
The plan would be implemented as it is without devising policies by Pakistan will significantly diminish Pakistan’s authority over its land and resources and would allow Chinese nearly unrestrained access to our ports and other assets. In short run, this would be an awesome concoction of capital into Pakistan but in the long term if this plan as it is implemented without discussing in the parliament of Pakistan may be paying back more money than China is bringing into Pakistan.

Initially, this program was not talking about the agriculture, but now in this LTP report, the major portion has been discussed the agricultural field. Though everything is connected with each other as the development of infrastructure bring revolution in the agricultural technology. Many studies have been done in this regard as Woelcke’s study reveals that investment in the road infrastructure reduces the cost of transportation.  The improvement in the quality of the roads leads to the increment of 20 0r 35 percent in the purchasing power of the farmers according to the season. Likewise, poor infrastructure has adverse impacts on the export of agriculture output because farmers usually have low access to credit in almost all developing countries which could be a hurdle in purchasing the inputs used in farms. It is also observed that markets located at a distance are the main hurdle to use fertilizers and to sell the agricultural products.  Various types of infrastructure and agricultural output growth are directly proportional. If the irrigation infrastructure is developed, the revolutionary changes in agricultural output are inevitable by enhancing the land use intensity and provide incentives to farmers to use productivity increasing inputs. Rural electrification increases the irrigated area and also irrigation facilities. Resultantly the output of crops cultivated through underground irrigation system which is always higher than those under canal or tank irrigation.  Hence one could be optimistic about the CPEC project that the development of infrastructure brings revolution in agriculture technology.

So the CPEC has a direct impact on the agriculture sector also like the long term plan more talks about the agrarian economy. Mr. Ahsan Iqbal, the Project Director of CPEC, claimed on last Monday,
“It is a live document, and both sides [China and Pakistan] have the understanding to modify it as per the need besides reviewing it periodically,” he further mentioned that the long-term plan could not have been disclosed by Pakistani government without consulting the Chinese, he called the Dawn story “half cooked” in a race to break the news first”.

Pakistan has signed some new deals of $500 million ahead of Beijing’ international forum (OBOR Summit) which has been attended by leaders from at least 29 countries to promote Xi Jinping’s vision of expanding trade links.

Discussing the plan’s layout to make the visa-free tourism possible with China to provide more convenient policy support for Chinese tourists to Pakistan without any reciprocal arrangement for Pakistani nationals to visit China, I must say Pakistan cannot take this enormous step as it is most affected country from terrorism, there could be more chances of infiltration of terrorist including Uyghur militants to Pakistan. Pakistan should not only rely on the foreign direct investment China but with the better security environment, it should cooperate with other countries for the direct investment like Bangladesh, etc. There is some optimism regarding the CPEC long term plan if Pakistan devises some policies if any default occurs.