The Twin Essence of Our Times 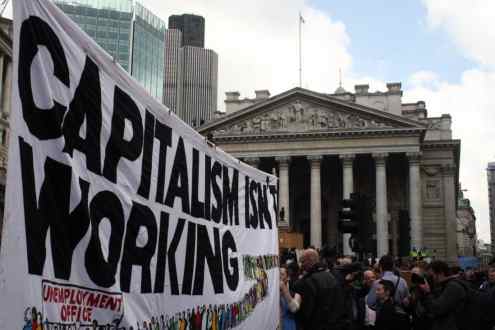 The pestilence of COVID-19 has not only revealed the failures of capitalism but also exuberated over all institutions of capitalism. The culture of crisis and conflicts are organic to capitalism. Capitalist systems are antithetical to the idea of peace, prosperity, and stability. The Coronavirus infused lockdown is a time to reflect on emanating crisis and conflicts across the world. Some capitalist predicaments are temporary, but most of them are annihilating for people and the planet. The capitalist crisis is producing meaninglessness of life and alienating the environment, which treats people and the planet as orderly objects to consolidate and expand the empire of profit. The profit-driven economy produces a compliance culture of politics that destroys the idea of democracy and individual freedom to uphold the interests of the market forces.

The assaults on democracy, secularism, multiculturalism, reason, science, peace, and stability have become everyday affairs within capitalism. The clients of Davos priests and capitalist powers led by Brussels, Westminster, and Washington are on overdrive to reverse the trend, but they have failed to provide basic health, education, employment, and food as fundamental rights. The dignity of life and citizenship rights are in shatters under capitalism. Capitalism and all its institutions are trying to recover from the crisis by expanding its support for imperialist wars, neo-colonial modes of resource exploitation, authoritarian politics, and reactionary religious forces in the society.  These capitalist methods of survival put people and the planet in danger. It diverts the progressive nature of class conflicts with reactionary nationalist and religious forces. It obscures the future of humanity.

The world is facing major humanitarian crises today due to wars, global warming, pandemic, and loss of sources of livelihoods for the survival of the masses. These crises owe their origin within capitalism as a result of the overexploitation of nature and human beings. Scarcity, famine, natural disasters are natural outcomes of profit fetishized capitalist system, which reproduces crises and accelerates hunger, homelessness, poverty, inequalities, and exploitation on a world scale. Capitalism survives by destroying the creative abilities of individuals and regenerative abilities of nature. Therefore, capitalism cannot offer any form of alternatives for the sustainable future of humanity.

As advanced capitalist countries in Europe and America suffer under capitalism and the pandemic of Coronavirus, the countries like; China, Cuba, and Vietnam show their commitments and abilities to contain Covid-19 and ensure public health, security, and safety of human lives. Socialist experiments with all its limitations show that people’s lives are more important than a profit-driven economic system. Therefore, it is time to revive alternative politics by expanding working-class struggles by forming local, regional, national, and international alliances with all democratic, liberal, and progressive forces all over the world. The sustainability of working-class struggle within a progressive path depends on the quality and size of the communist parties to guide them. The history of working-class struggles reveals that only communist parties can transform class consciousness into class organisations and class struggles.

The future of people and the survival of the planet depends on our abilities to organise people and communities under the red flag to overthrow capitalism. Communism is the only alternative to celebrate democracy and individual freedom in a real sense whereas capitalism promotes fictitious freedom and market democracy. It is only communists who can overcome narrow silos and develop class unity of intersectionality to fight different layers of exploitation and inequalities based on gender, race, caste, religion, and sexualities. Class unity and struggles acknowledge individual differences and uniqueness.  It is only communists who fight for a nuclear-free world. Communists fight for a world free from war, exploitation, and inequalities. There is no other party, group, or ideology but communists who talk about humanism, peace, prosperity, people, and the planet without borders. The current crisis is an opportunity to campaign for a bigger communist party based on mass struggles to ensure an alternative to capitalism. Peace within a communist society or perish within capitalism are two available paths. The choice is clear before us. There is no future in capitalism.

The 20th century experienced the sparks of alternatives to capitalism with the rise of anti-colonial, anti-capitalist, anti-fascists, and anti-war working-class struggles for peace and democracy. Each of these struggles was organised and led by the working classes in Asia, Africa, the Americas, Europe, and Oceania. The 21st century is the time to demand and reclaim the ideological perspectives and historical legacies of working-class struggles often led by the socialists and communists all over the world. The forward march of equality, liberty, fraternity, and justice depends on our abilities to organise ourselves and fight against all forms of reactionary ideas and institutions established by the capitalist system.

From the rice fields of Asia and Africa to the supermarket shop floors of America and Europe, it is only the working classes who work and ensure all the pain within the bondages of capitalism. The working classes can also organise themselves for their own freedom from capitalism that exploits them. The working-class consciousness, courage, discipline, endurance, morality, and understandings are exceptional qualities in human history. Therefore, it is only the working classes, who can establish a just world free from exploitation and inequalities. A consistent, continuous, and strong working-class struggle and a bigger communist party are twin necessities of our time. There is no other way but to fight locally, provincially, and nationally to reclaim lost working-class glories of internationalism based on peace, solidarity, and prosperity.