The tipping point for Indian Muslims is not too far away

In his inauguration speech, US President Donald Trump pledged to bring an end to “radical Islamic terrorism” from the “face of the earth”. He even went on to sign an executive order on January 27,  imposing temporary travel ban on citizens of seven Muslim-majority countries. Most of the far-right political parties in Europe have been also using the perceived threat of radical Islam to demand for restrictions on Muslim immigration.

The customary complain in the West is that the Muslims are hesitant to assimilate and respect the dominant non-Islamic culture of the land leading to regular clash of values. In June 2016, Trump in an interview with Sean Hannity of Fox News had complained that Muslims in America are unassimilable and also a “percentage” of them want to wage holy war against Americans.

If Muslims are unassimilable and perennially prone to radicalism, then India should have been the epicentre of Islamic terror. 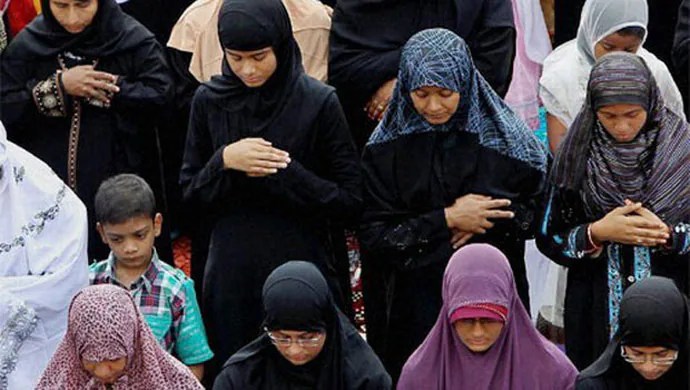 If Muslims are unassimilable and perennially prone to radicalism, then India should have been the epicentre of Islamic terror. (Credit: PTI photo)

In the United States, the Muslim share of population is still less than 1 per cent, while in Europe it is around 6 per cent, but in India, Muslims account nearly 14.4 per cent of the population, and in raw numbers roughly 180 million. With this 11 per cent of the total global Muslim population, there are more Muslims in India than anywhere else in the world except Indonesia and Pakistan.

While India’s neighboring countries Pakistan and Bangladesh are in upheaval because of Islamic radicalism, it is worth noting how little it has emerged in India. No Indian Muslim had gone to fight for al Qaeda and Taliban in Afghanistan, and so few compared to countries in the West have joined ISIS.

Even Indian Muslims have not gone to Kashmir to support separatist struggle there. The conflict in Kashmir, as some commentators usually confuse, is not because of radicalisation of Islam, but it is a struggle for self-determination.

The terror incidents involving Muslim suspects are not new for India and has very little to do with global network of radical Islam. Since independence, India has been facing terror threat, as neighboring Pakistan has promoted it as a “self-defence” strategy. Not only Muslims, but also Hindus have been lured by Pakistani intelligence agencies to carry out terror attacks in India as we have seen in the recent arrest of 11 ISI agents in Madhya Pradesh.

If any religious group, which has been radicalised in India in recent years, besides Sikhs in 1980s and 1990s, it is Hindus. India’s real threat to its internal security at present comes from its homegrown radicalised Hindutva groups.

Then, why have Indian Muslims proved most pundits of “Islamic terror” wrong and have refused to be radicalised?

As the Pew Research Center predicts, by 2050, India’s Muslim population will go up to 310 million, making up 18 per cent of the country, though Hindus will continue to remain as the dominant majority with 77 per cent of the total population.

While the Muslim share of the population is gradually increasing in the country, the growth rate like other religious communities has slowed down considerably.

Not only that, Muslims have shown a 50 per cent higher decline in growth rate than Hindus in the last decade.

However, that has not stopped Hindutva groups making big noise over this very minor upward trend of the Muslim population percentage. Even junior home affairs ministers in the Narendra Modi government, Kiren Rijiju, has accused this minority population growth on conversion in a controversial tweet on February 13: “Hindu population is reducing in India because Hindus never convert people. Minorities in India are flourishing unlike some countries around.” Kiren Rijiju says Hindu population is reducing in India because Hindus never convert people and minorities in India are flourishing unlike some countries around. (Credit: PTI photo)

Hindutva leaders not only use the religion-based population projections to spread propaganda that Muslims are on a mission to take over India and make it into a Pakistan, they have also been accusing Congress Party for the so-called minority appeasement policies for decades.

Since the BJP came to power in 2014, this is not a political accusation any more against its opposition, rather this “wisdom” is guiding state policy vis-à-vis Muslim minority. This alleged policy of minority appeasement by the Congress party is not based on any fact and it completely overlook the appalling socio-economic deprivation of India’s Muslims.

The majority of the Muslim population in India is poor and less educated. Many have fallen behind and have not been able take advantage of India’s economic growth in the last two decades.

A seven-member panel headed by Justice Rajinder Sachar, after investigating social, economic and educational status of the Indian Muslims, had submitted its report in 2006, which was subsequently presented to Parliament. The report found 31 per cent of India’s Muslim were living below poverty line and the Muslim community was “lagging behind” other religious groups in development indicators, even in some measures they as a group fell below Dalits and Adivasis.

A survey by the National Council for Applied Economic Research (NCAER) had also confirmed that in 2004-2005, three out of every 10 Muslims were below poverty line.

The Sachar Committee Report had also found Muslims representation in government employment was a mere 4.9 per cent. Moreover, Muslim representation was just 4.5 per cent among railway employees and only 3.2 per cent in Indian civil services.

Compared to the national average of 64.8 per cent, the literacy rate among Muslims was only 59.1 per cent. Situation was much worse in higher education. The report had also documented bias against Muslims in getting loans by the private as well as public sector banks etc.

The inequality between Hindu majority and Muslim minority continues to widen further. A study by the National Sample Survey Office (NSSO) called Employment and Unemployment Situation Among Major Religious Groups in India, has found the average monthly per capita expenditure (MPCE) of a Hindu household in 2009-10 was Rs 1,123 while that for a Muslim household was only Rs 980.

According to a World Bank report in 2013, nearly 34 per cent of all Muslims in urban India were below the poverty line compared to 19 per cent of Hindus. Between 1983 and 2009-10, the poverty rate for urban Hindus declined by 52 per cent, but the rate of decline for urban Muslims was only at 39 per cent.

Muslims are undoubtedly most deprived of religious groups in India’s job market. In private sector major companies, even Muslims constitute less than 3 per cent of directors and senior executives. The Kundu Committee in 2014, constituted by the ministry of minority affairs to evaluate Sachar Committee Report, has examined the income, monthly per capita consumption expenditure, and access to health, education and basic services of the Muslims in India and has found that they fared poorly on most of these socio-economic indices.

India’s Muslims are largely untouched by the country’s rapid economic growth since the beginning of this century. One in four beggars in India is a Muslim.

A Gallup report based on nationally representative studies conducted in 2010 and 2011 finds that Indian Muslims are not only economically disadvantaged, among other religious groups, they are also most dissatisfied and most likely to have highly negative about their current life situation.

This growing socio-economic inequality and developing despair provide a fertile ground for radicalisation of Indian Muslims in India. But, that has not taken place yet. Muslims in India are not unassimilable as Trump claims.

An editorial of The Economist particularly highlights the tradition of intermingling of Muslims with Hindus makes Indian Muslims moderate.

Usually the credit is being given to Sufism and tradition of tolerance for Indian Muslims to stay away from radical influences, and this theory conveniently ignores the contributions of inclusive pluralistic political culture of post-independence India.

The crux of the survival of democracy in a hostile environment like India has been due to the nature of the post-independent Indian state, and its willingness to bargain and accommodate minority interests. Indian political system has been primarily a rebuttal of the majority system in the form of a consociational model, as Dutch political scientist Arend Lijphart argues that the federal arrangements in which the rights of religious minorities are protected, and there are separate “personal laws” for the minorities.

Congress-led governments might have failed to economically integrate Muslim minority, but had given them a secular Constitution and a powerful stake in the political system. Active and decisive participation of Indian Muslims in the democratic process had given them strength to stand up against extremist religious leaders.

The Gallup report, which has found out that Muslims in India are dissatisfied with their life situation in 2010-2011, had also noted that they were overall satisfied with the freedom they have in the country to do what they want to do in their lives and most importantly they had confidence in the country’s democratic institutions. That provides the clue to why India has managed to avoid the radicalisation of its Muslim minority.

However, the 2014 General Elections in the country has brought a significant reduction in the share of influence Muslims had in India’s national politics. It is not only economic deprivation anymore, Modi’s India has also brought political exclusion for Muslim minority.

The open hostility of the ruling party and its leader towards minorities has changed the political landscape of the country to such an extent that Muslims are fast losing the freedom they had over their lives and lifestyle.

Ruling party’s open support for cow worship, conversion, uniform civil code and vigilantism against inter-religious marriages leads to further marginalisation and regular harassment of Muslims. For the first time in the country, the governing party has no Muslim MP in the Lok Sabha.

In the present Lok Sabha, there are only 22 Muslims, accounting for 4.2 per cent of total number of MPs.

In the ongoing state election in Uttar Pradesh, where Muslims constitute nearly 20 per cent of the total population, the BJP has not fielded a single Muslim candidate of its own. This leads to a sense of political disenfranchisement for the Muslim minority in India, as it dismantles country’s consociational model of power sharing and replaces it with a majoritarian tyranny.

The growing intolerance of the state and exclusion from national political power pot increasingly push Indian Muslims to the edge as they continue to lag behind in the economic sphere. Unless corrective measures are taken expeditiously to provide an inclusive political space, the tipping point for Indian Muslims is not too far away. If Muslims in India get rid of their moderation and fall prey to radicalism, the credit for it will go to no one else but the Hindutva forces.