The Testimonies of Indian Soldiers and the Two World Wars: Between Self and Sepoy 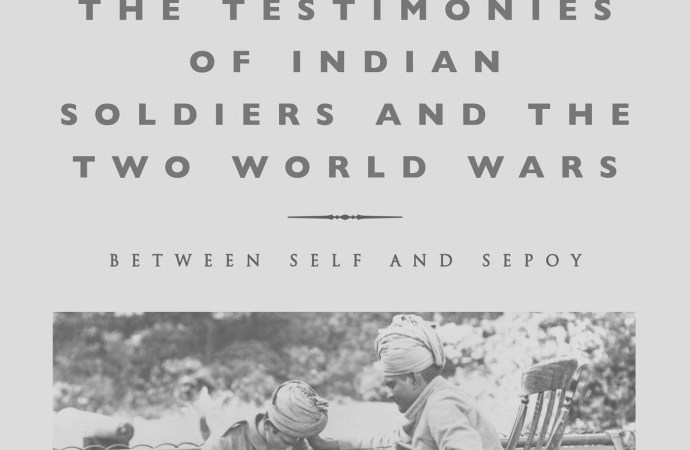 Gajendra Singh’s depiction of the two world wars through the eyes of Indian soldiers using their letters opens an area that Indian history writers did not cover adequately over the last century.  India was not an independent nation when the two great wars raged in which millions of Indian soldiers fought and many gave their lives.

The Indian Army was the chief Imperial reserve force for an empire under threat. How did those sepoys understand and explain their own war experiences and indeed themselves through that experience? Their testimonies draw upon accounts of how Indian combatants came to terms with the conflicts and evolution of their military identities under the British Raj.

War testimonies, chiefly letters, depositions and interrogations were the base of the stories which articulate the important contributions Indian soldiers made to the British Empire, South Asia and the two world wars.

Using the letters sent home by the Indian soldiers, Singh gives a glimpse into the British Indian army and how the British perceived soldiers from the different regions. The book gives detailed characteristics of the British idea of the ‘martial races’. The British liked to see themselves as ‘chivalric’ like the Pathans while considering the Sikhs as the archetype of the perfect soldier and the Brahmins as symptomatic of the failings and virtues of all Indians in their fidelity and treachery.

India raised the world’s largest volunteer army; about 1.5 million in the First and 2.5 million in the Second World War. The wars served as important watersheds in which, for the first time, Indian soldiers fought on European soil in all major theatres of war; land, sea and air alongside the British troops. Unrecognized for decades, their contributions are being documented only recently. Their many awards for bravery, memorials on the battlefields, their war graves, are testimony to their sacrifice.

Singh uses excerpts from letters of soldiers from different fronts, reports of British officers and commissions to support a vivid understanding of how both sides perceived war from their own perspectives. He uses them to express the way discrimination existed, the race divide and how the British prevented Indian soldiers from pursuing sexual relationships with British women while recovering in the British hospitals. They saw it as a threat to white prestige, and degeneracy and moral decay in the mixing of the colonizers and the colonized.

Gajendra Singh covered both wars in a single volume unlike any other author. The book analyzed the army as an institution that touched upon the cultural ethos as well as the social issues within the army. It is a cross between ‘new military history’ and ‘traditional military history’ in terms of tactics, campaigns, leadership and the impact of warfare on society and culture.