Discriminatory policies of Myanmar’s government since the late 1970s have compelled hundreds of thousands of Muslim Rohingya to flee their homes in the predominantly Buddhist country. Most have crossed by land into Bangladesh, while others have taken to the sea to reach Indonesia, Malaysia, and Thailand.

Renewed violence, including reported rape, murder, and arson in 2017, triggered a massive exodus of Rohingya amid charges of ethnic cleansing against Myanmar’s security forces. Those forces claim to be carrying out a campaign to reinstate stability in the western region of Myanmar.

Who are the Rohingya?

The Rohingya are an ethnic Muslim minority who practice a Sufi-inflected variation of Sunni Islam. A majority of the estimated one million Rohingya in Myanmar reside in Rakhine State, where they account for nearly a third of the population. They differ from Myanmar’s dominant Buddhist groups ethnically, linguistically, and religiously.

The Rohingya trace their origins in the region to the fifteenth century, when thousands of Muslims came to the former Arakan Kingdom. Many others arrived during the nineteenth and early twentieth centuries, when Rakhine was governed by colonial rule as part of British India. Since independence in 1948, successive governments in Burma, renamed Myanmar in 1989, have refuted the Rohingya’s historical claims and denied the group recognition as one of the country’s 135 ethnic groups. The Rohingya are largely considered illegal immigrants from Bangladesh, even though many trace their roots in Myanmar back centuries.

Neither the central government nor Rakhine’s dominant ethnic Buddhist group, known as the Rakhine, recognize the label “Rohingya,” a self-identifying term [PDF] that surfaced in the 1950s, which experts say provides the group with a collective political identity. Though the etymological root of the word is disputed, the most widely accepted theory is that Rohang derives from the word “Arakan” in the Rohingya dialect and ga or gyameans “from.” By identifying as Rohingya, the ethnic Muslim group asserts its ties to land that was once under the control of the Arakan Kingdom, according to Chris Lewa, director of the Arakan Project, a Thailand-based advocacy group. 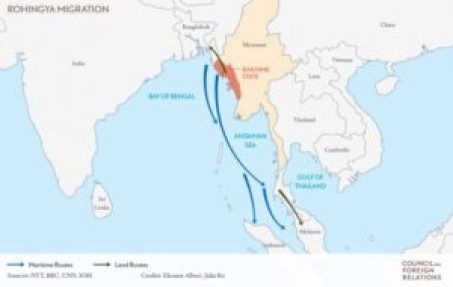 What is the legal status of the Rohingya?

The government refuses to grant the Rohingya citizenship, and as a result the vast majority of the group’s members have no legal documentation, effectively making them stateless. Myanmar’s 1948 citizenship law was already exclusionary, and the military junta, which seized power in 1962, introduced a law twenty years later stripping the Rohingya of access to full citizenship. Until recently, the Rohingya had been able to register as temporary residents with identification cards, known as white cards, that the junta began issuing to many Muslims, both Rohingya and non-Rohingya, in the 1990s. The white cards conferred [PDF] limited rights but were not recognized as proof of citizenship. Still, Lewa says that they did provide some recognition of temporary stay for the Rohingya in Myanmar.

In 2014 the government held a UN-backed national census, its first in thirty years. The Muslim minority group was initially permitted to identify as Rohingya, but after Buddhist nationalists threatened to boycott the census, the government decided the Rohingya could only register if they identified as Bengali instead.

Similarly, under pressure from Buddhist nationalists protesting the Rohingya’s right to vote in a 2015 constitutional referendum, then-President Thein Sein canceled the temporary identity cards in February 2015, effectively revoking their newly gained right to vote. (White card holders were allowed to vote in Myanmar’s 2008 constitutional referendum and 2010 general elections.) In the 2015 elections, which were widely touted by international monitors as free and fair, no parliamentary candidate was of the Muslim faith. “Country-wide anti-Muslim sentiment [PDF] makes it politically difficult for the government to take steps seen as supportive of Muslim rights,” writes the International Crisis Group.

Muslim minorities continue to “consolidate under one Rohingya identity,” says Lewa, despite documentation by rights groups and researchers of systematic disenfranchisement, violence, and instances of anti-Muslim campaigns [PDF].

Why are the Rohingya fleeing Myanmar?

The Myanmar government has effectively institutionalized discrimination against the ethnic group through restrictions on marriage, family planning, employment, education, religious choice, and freedom of movement. For example, Rohingya couples in the northern towns of Maungdaw and Buthidaung are only allowed to have two children [PDF]. Rohingya must also seek permission to marry, which may require them to bribe authorities and provide photographs of the bride without a headscarf and the groom with a clean-shaven face, practices that conflict with Muslim customs. To move to a new home or travel outside their townships, Rohingya must gain government approval.

Moreover, Rakhine State is Myanmar’s least developed state, with a poverty rate of 78 percent, compared to the 37.5 percent national average, according to World Bank estimates. Widespread poverty, poor infrastructure, and a lack of employment opportunities in Rakhine have exacerbated the cleavage between Buddhists and Muslim Rohingya. This tension is deepened by religious differences that have at times erupted into conflict.

Clashes in Rakhine broke out in August 2017, killing more than five hundred people after a militant group known as the Arakan Rohingya Salvation Army (ARSA) claimed responsibility for attacks on police and army posts. The government declared ARSA a terrorist organization and the military mounted a brutal campaign that destroyed hundreds of Rohingya villages and forced more than five hundred thousand Rohingya to leave Myanmar, approximately half of the estimated Rohingya population in the country.   Myanmar’s security forces allegedly opened fire on fleeing civilians and planted land mines near border crossings used by Rohingya to flee to Bangladesh.

Rights groups and UN leaders have condemned the escalating violence and atrocities, which have been described by a number of observers as ethnic cleansing and crimes against humanity. The clashes and exodus have created what UN Secretary-General Antonio Guterres calls a “humanitarian and human rights nightmare.” At an emergency UN Security Council meeting, U.S. Ambassador to the United Nations Nikki Haley said Myanmar authorities have carried out “brutal, sustained campaign to cleanse the country of an ethnic minority,” and she called on members to suspend weapons provisions to the military. Other Security Council members, like Russia and China, have resistedincreasing pressure on Myanmar’s government because they say it is trying to restore stability.

Sectarian violence is not new to Rakhine State. Security campaigns in the past five years, notably in 2012 and 2016, also resulted in the flight of tens of thousands of Rohingya from their homes.

Most displaced Rohingya have been forced to take shelter in squalid refugee camps, many across the border in Bangladesh where humanitarian resources are stretched thin. Children, women, and the elderly make up much of the latest wave of refugees who have fled to Bangladesh. According to employees of the medical charity Doctors Without Borders, camps were able to provide less than one liter of water a day per person and medical services were operating beyond their capacity, as of September 2017. Other refugees have turned to smugglers, paying for transport out of Bangladesh and Myanmar and risking exploitation.

Where are the Rohingya migrating?

In 2016, Myanmar’s first democratically elected government in a generation came to power, but critics say it has been reluctant to advocate for Rohingya and other Muslims for fear of alienating Buddhist nationalists and threatening the power-sharing agreement the civilian government maintains with the military.

Some observers saw the establishment in August 2016 of an advisory commission on ethnic strife led by former UN Secretary-General Kofi Annan as a positive development, but subsequent outbreaks of violence have curbed this optimism.

Aung San Suu Kyi, Myanmar’s de facto leader, has denied that ethnic cleansing is taking place and dismissed international criticism of her handling of the crisis, accusing critics of fueling resentment between Buddhists and Muslims in the country. In September 2017, the Nobel Peace Prize laureate said her government had “already started defending all the people in Rakhine in the best way possible.”

How is the region responding?

Protesters have at times gathered in cities in Pakistan, India, Thailand, Indonesia, and Bangladesh to condemn the killing and persecution of Rohingya. In September 2017, Bangladesh’s foreign minister condemned the violence in Rakhine as “genocide” and Indonesia has called on the Myanmar authorities to halt their campaign and bring an end to the violence. Yet governments in Southeast Asia lack established legal frameworksto protect refugees’ rights, and the ten members of the Association of Southeast Asian Nations (ASEAN) have not coordinated a response to the deepening crisis.

Indonesia, Malaysia, Myanmar, and Thailand—all ASEAN members—have yet to ratify the UN Refugee Convention or its protocol. ASEAN itself has been silent on the plight of the Rohingya and on the growing numbers of asylum seekers in member countries, largely because of its members’ commitment to the principle of noninterference in each other’s internal affairs.

How have others responded?

In December 2016, U.S. President Barack Obama lifted sanctionsagainst Myanmar, saying that the country had made strides in improving human rights. The move came amid a crackdown on Rohingya and was criticized by some as premature. In September 2017, the United States committed $32 million to supply food, medical care, water, and shelter for Rohingya who have fled but there has been no talk of reimposing sanctions.

Advocacy groups including Human Rights Watch, the Arakan Project, and Fortify Rights continue to appeal to major international players to exert pressure on Myanmar’s government. Others, such as Priscilla Clapp, a former U.S. diplomat in Myanmar, say that placing sole blame on Myanmar oversimplifiesand misrepresents the complexities of the country’s historical ethnic diversity. “An international response that consists primarily of assigning blame for this humanitarian tragedy is no longer tenable. It is time for the international community to organize a realistic, workable solution,” writes Clapp.

Annan’s advisory commission published its findings in late August 2017, after a year of investigation. It recommended that Myanmar lift restrictions on movement and citizenship. “Tensions remain high and they risk becoming worse. Violence will not bring lasting solutions to the acute problems that afflict the Rakhine State,” Annan said.

Resentment of the minority group has run deep for generations. Without overhauling “a culture of pervasive prejudice” and ensuring that Rohingya are treated as human beings, the situation in Rakhine State is unlikely to improve, says journalist and author Francis Wade.