The Pandemic and Withering Away of the Working Classes in India 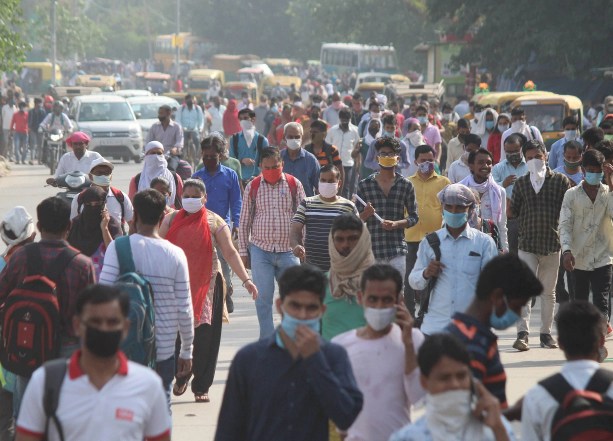 The ordeals of the migrants and other working classes are not going to end if they survive from the COVID-19. The central and state governments are making sweeping changes to the labour laws to lure capital investments. There is no ideological difference between the BJP and Congress party when it comes to assault on the rights of labourers. Both these national parties consider that capital and its interests are sacred whereas workers are disposables. The nationalism and patriotism are new drugs found in Indian politics, where ruling classes are addicted to uphold the interests of capitalist classes. The evil regimes of the central government in New Delhi and state governments in Assam, Uttar Pradesh, Gujarat, Madhya Pradesh, Haryana, Himachal Pradesh, Rajasthan Karnataka, Punjab and Odisha are leading in labour laws reform processes in response to worsening economic situation during the pandemic. The economic situation was battered by the wrong economic policies and misplaced priorities of Modi government before the outbreak of the Coronavirus. The unplanned lockdowns have further accelerated the grave economic downturn. Instead of finding sustainable alternative policies and programmes for economic revival, the governments are on overdrive to please capitalist classes at the cost of workers’ lives and livelihoods. The pandemic gives an undemocratic legitimacy to the governments to enforce legislative changes with ordinances, which are detrimental to working-class people.

The Uttar Pradesh and Gujarat governments have suspended thirty-eight labour laws in support of industries for the next three years.  The Madhya Pradesh and Odisha governments have reformed the Factories Act-1948, which provides various protective measures to the workers. The labour reforms are not only diluting the laws but also suspending it and exempting companies from following laws that safeguard workers’ health, safety, and wellbeing in the industrial workplace. Several other state governments are also amending their labour laws to increase working hours and overtime work limit policies. Hire and fire is the sole motto of these labour reform policies. Such regressive and reactionary labour reforms are branded as untapped opportunities for employment generation and economic growth while it violates the ILO conventions and international commitments on the protection of labour. The labour market reforms in India send a strong and wrong signal to the working classes that the states and governments are is going to stand with capital and not with people. The lives and livelihoods of working classes are less significant than the mobility of capital in India.

The labour market deregulation is deference to consolidation of capital by corporate power. It renunciates the idea of the welfare state and redistributive government by accelerating the orthodoxies of neoliberal disposition in the name of reforms, which disempowers the masses. The consequences of comprehensive labour reforms are going to defeat its twin purposes; increase productivity and mobility of capital. It is empirically well established that the productive power of labour diminishes with the weakening of workers protection, low wages, reduction of other entitlements, and incentives of labour. Low labour morale creates low productivity trap which weakens the mobility of labour. So, the short-term luring of capital is neither in the best interests of capital nor in the interests of labour in the long run. So, the pandemic led labour reforms are thoughtless, nasty, illusionary, and myopic. The economic framework of labour market reform is based on false economic promises to both labour and capital. These labour reforms are not only weakening labour but also slumping the economy.  It weakens the republic too. Capital is attracted to the productive and skilled labour market and not to the unemployed army of cheap and unskilled labourers. In a bid to avoid such a situation, the states and governments must reassert its protective and welfare responsibilities in the interests of the country and its people by reversing the unwanted labour reforms.  It is the duty of every democratic and welfare states and government to stand with its most vulnerable population during the global health crisis triggered by the Coronavirus pandemic. But the pandemic infused crisis is an opportunity for the ruling and non-ruling classes to further disenfranchised the working classes in India.

It is workers sweat that transformed into capitalist profit in the excel sheets of their bank accounts and immovable assets. The labour is central to the production process and economic growth. But the labour market reform framework is repositioning the working classes as secondary to capital. Such ideological praxis is the hallmark of right-wing political economy dating back to the early 19th century. It is a great leap backward in terms of its objectives, analysis, and outcomes. The economic and political logic behind these reforms lacks social and economic rationales due to a lack of historical understanding of labour and capital relationships even within capitalism and the declining relevance of illiberal laissez-faire political economy. The formidable resistance to right-wing political and economic onslaughts on the working-class is unavoidable for the sake of India and Indian workers. The organised struggle against the anarchy of capitalist loot is the only alternative for the survival of the working people in India.

The security to wages, work with dignity, and secure workplace is a fundamental right of workers and precondition to egalitarian economic growth and civilised development in India. History is the witness to the fall of civilisations due to adverse economic conditions, social and political breakdowns. India is at a critical crossroads today due to directionless economic governance, arrogant politics, ignorant government, and majoritarian dominance of society by the Hindutva forces. It is time for the labour movement to fight and ensure the security of work in a secure workplace and move beyond the politics of wage bargain. It needs to engage with the broader realities of India, where the divisive Hindutva politics is destroying working-class unity. Unless this broader agenda is not undertaken urgently and seriously, the failure to represent inclusive working-class interests creates the conditions for the rise of the reactionary politics of Hindutva with its capitalist spirit and actions. The labour market is a serious warning sign for the future of working-class lives and livelihoods. The future of the country depends on halting the forward march of such a reform with united struggles in defence of working people in India.