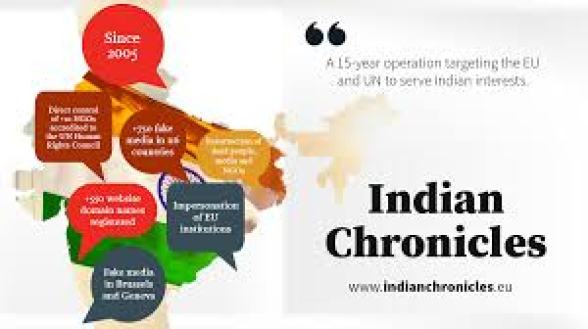 In the contemporary era of warfare, Hybrid war has emerged as the most complex warfare domain. In recent years, it has irreversibly transformed the dynamics of warfare. In hybrid warfare, the irregular and non-traditional methods are used by a state against its adversary. In a way, it has extended the scope of the war from being the domains of militaries to a borderless war. Many security experts worldwide perceive hybrid warfare as a ‘new normal’ that has altered the way wars are to be fought. The South Asian region has also become a hybrid warfare theater where India has been involved in an active hybrid war against Pakistan. Specifically, in recent years this has gained a considerable intensification. For instance, India uses information war against Pakistan as a hybrid toll in pursuit of its broader goal of destabilizing and maligning Pakistan. In this regard, the recently launched EU Disinfo Lab Report provides undeniable evidence of how India has been doing all this for over the years. This has further supported Pakistan’s long-held stance about India’s anti-Pakistan obsession.

In the current era, India has been actively following its grave hybrid agenda against Pakistan. In this regard, India aspires to wage a low-intensity conflict in the region by employing proxies that would harm Pakistan’s interests. This is further evident from the Indian involvement in the unrest in Balochistan. Since the ongoing development because of the CPEC is not favorable for the Indian interest as of now. It serves as one reason that has encouraged India to launch a sustainable hybrid campaign against Pakistan. Furthermore, the arrest of Kalbushan Jhadav, who is a serving officer of the Indian Navy back in 2016, is also significant. His confession of spying and supporting terrorism is on record. In the same vein, the Balochistan Liberation Army (BLA), a known terrorist group, is funded and backed by India. The group is reportedly behind the Chinese Consulate attacks in Karachi in 2018 and the terrorist attempt to attack the Pakistan Stock Exchange building in Karachi in June 2020. Similarly, the Pashtun Tahafuz Movement (PTM), a self-proclaimed and controversial ethnic group involved in anti-state activities, is backed by India through its intelligence agency Research and Analysis Wing (RAW) with Afghan support. These deeds indicate that India is already vigorously trying to undermine Pakistan’s security through its hybrid agenda.

Most recently, a European non-governmental organization (NGO), EU DisInfo Lab, based in Brussels, in its latest research, ‘Indian Chronicles,’ has exposed a massive Indian hybrid campaign against Pakistan. The report has exposed one of the largest ever disinformation networks against any country while covering an operational era of 15 years since 2005. It highlights that the Indian entities like the ‘Srivastava Group’ and some think tanks have been given the task to discredit Pakistan’s interests at the international level during this period. It further exposes that the entity was involved in influencing the decision making at the United Nations Human Rights Council (UNHCR) and the European Union (EU) Parliament. In pursuit of this objective, the entity has used some 550 web domains, 759 fake media outlets in 116 countries to produce fake content that could reach millions of people worldwide. Furthermore, the network has re-established dead UN-accredited NGOs to work against Pakistan. The EU Disinfolab has rightly termed their research as a deeper dive into a 15- year operation that has targeted the UN and the EU to work for the Indian interests and damage Pakistan.

It would be quite pertinent to highlight that the 2020 Report is a continuation of an assessment carried out by the EU Disinfo Lab in 2019. As per last year’s report, a network of 265 fake media outlets and notorious think tanks and NGOs was discovered. It was involved in reproducing negative online content regarding Pakistan. Surprisingly, it was disclosed that some fake European Parliament magazines were established. These were aimed at serving the Indian interests and undermining Pakistan in the European Parliament. In this regard, magazines like, ‘Magazine for the European Parliament,’ ‘Times of Geneva,’ and the press agencies like the ‘4 News Agency’, and ANI are quite significant. Their main activities were to publish and broadcast the anti-Pakistan agenda to trap the European Parliament members (MEPs). This, in turn, would further add to the voice of the Indian lobbying against Pakistan at the forums like the EU Parliament and the UN.  It was the 2019 report in which astonishing and shocking facts were revealed. Consequently, this had compelled the EU DisinfoLab to conduct deeper research on the matter once again in 2020. This indicates the rapid augmentation of the Indian hybrid agenda to destabilize Pakistan at any cost.

Hence, it becomes apparent that India is actively involved in waging a grave and an active hybrid war against Pakistan. The recently launched report provides evidence of how India, over the years, has been using disinformation campaigns as a major hybrid tool against Pakistan. Apart from this, other dynamics also indicate how India has been using a deliberate disinformation campaign against Pakistan at various international forums. For instance, the Indian lobbying against Pakistan at the FATF that Pakistan is a sponsor of terrorism appears to be in-line with the Indian active hybrid campaign against Pakistan. Contrary to this, the fact remains the other way around as India itself is involved in support of terrorism. This has become more evident from the US Department of Treasury’s FinCEN recent report of 2020 in which it has been exposed that India is involved in financial support of terrorism. Furthermore, this report’s timing is quite significant as well since it comes right after Pakistan’s dossier that has been presented to the international community. The dossier provides evidence of how India has been running a terror campaign against Pakistan over the years. Finally, a strong manifestation of exposing the Indian hybrid agenda in front of the international community would further strengthen Pakistan’s principled stance in this regard.

The writer currently works as a Research Associate at the Strategic Vision Institute (SVI) in Islamabad, Pakistan.