The Dark Side of Indo-French Nuclear Cooperation 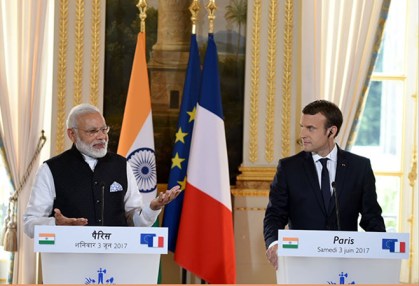 In 1945, United States used Nagasaki and Hiroshima, two major cities of Japan, as testing labs for nuclear weapons- leading WW-2 to an end. When world community witnessed disastrous consequences of nuclear weapon use in conventional warfare, it became the need of the hour to restrict other states from acquiring these lethal weapons.

After the use of an atomic weapon, entire world and U.S., in particular, realized that nuclear weapons are most lethal and catastrophic weapons, in fact, it is inhumane to use these weapons against civilian targets. The then US President Eisenhower coined the idea of Atom for Peace which subsequently paved a way towards peaceful global usage of nuclear technology.

Realizing the catastrophic effects of the atomic weapon, the U.S. President Eisenhower in 1953 coined famous slogan of Atoms for Peace”. The Prime agenda associated with the atoms for peace program was to promote the peaceful uses of nuclear applications rather than the use of nuclear technology for weapon purposes to make the world better and safer place to live and equip almost all the nations to utilize benefits of atomic energy.

It was considerably attractive idea for the world to attain benefits from the nuclear applications because the only goal was to help developing countries produce electricity and conduct basic research in nuclear engineering. Whereas, moral obligations were vested with this plan that any state who will receive assistance regarding atomic technology under this plan will only use that assistance for peaceful purposes, not for military purposes. Under the umbrella of Atoms for Peace Plan India built two research reactors Apsara and Cirus with the cooperation of U.K. and Canada. Later on, India overruled all the moral obligations and ridiculed the idea of President Eisenhower, in fact, it betrayed the original spirit of the Atoms for Peace Plan and conducted its first nuclear test on 18 May 1974 under the codename Smiling Buddha. It is recognized the fact that track record of India’s nuclear weapon program is based on betrayal. Therefore, after the acquisition of nuclear weapon by India the world became more unsafe and the underlying agenda of President Eisenhower’s plan was compromised. India’s diversion of peaceful nuclear technology to weapons development was a slap over the serious concerns and reservations of the policymakers and atomic scientists who long feared the disastrous impacts of the nuclear weapon.

A recent visit of President of the French Republic, Mr. Emmanuel Macron has made significant collaboration with India in different sectors including Strategic Partnership, Economics, Educational, Science & Technology, Cultural & People to People Cooperation, Partnership for the planet and Expanding Global Strategic Convergences.

Every area which is being encompassed under this partnership has its complexities and drawbacks. Whereas, there are many serious concerns attached to the field of strategic partnership. This provision of the strategic partnership must be the point of concern for international community. Under strategic collaboration in pursuance of 2008 Agreement on the Development of Peaceful Uses of Nuclear Energy between India and France has concluded the Industrial Way Forward Agreement between NPCIL and EDF, for the Implementation of six nuclear power reactor units at Jaitapur. According to the locals, an area which has been designated for the construction of power reactors is one of the highly seismically active regions in India. Proposed area will also severely affect the livelihoods of thousands of locals. Realizing the harmful impacts of these nuclear power reactors without any comprehensive safety layout, protests had also been reported against this project in Jaitapur. An umbrella organization for groups fighting the project “Jan Hakka Seva Samiti” President Satyajit Chavan said “What the government is doing now is ridiculous. If the DAE wants to inspect functional Electron Paramagnetic Resonance (EPR), they should have placed this demand before giving environmental clearance. This only proves how badly the whole project was designed”.

Protests depict that inhabitants of Jaitapur are extremely concerned about the project and aware of the fact that this project will turn into a nuclear disaster like Fukushima. On the other hand, the Indian government has kept mum over the concerns expressed by the locals, and this also illustrates that Indian government does not care for the interest of its population. Therefore, if a state is unable to address the reservations of its population than how will it care for the international norms and values of the international community? It’s more likely that India will not abide by the moral obligations.

The alarming factor is that in the garb of peaceful uses of nuclear technology India acutely ridiculed the spirit of Atoms for Peace Plan and committed a historical blunder by using plutonium out of the civilian reactor to build a nuclear weapon. Therefore, Indo-French nuclear cooperation is a glimpse of atoms for a peace plan, again India is receiving assistance regarding peaceful purposes, and more likely India will repeat the same horrible and unethical episode and the whole world along with India’s next episode of nuclear proliferation. The international community must step in to stop illicit use of nuclear technology in India. Foreign nuclear assistance to India in the nuclear domain has freed India’s domestic resources for the nuclear weapons developments. India is seeking for the foreign nuclear assistance to make more bombs from domestic resources. As several reports point out, India is the only nuclear power which has largest stocks of unguarded uranium resources. It is up to the international community to analyze whether India needs foreign nuclear assistance mainly when it has most considerable un-safeguarded nuclear material.