Rajapaska brothers handed a mandate by voters to change the constitution 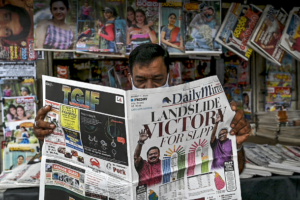 The Sri Lanka Podujana Party (SLPP) secured a two-thirds “super majority” by winning 145 of the 225 seats in the Aug. 5 poll. It also gained five seats from its allies.

South Asia’s first parliamentary election held amid the Covid-19 pandemic had a voter turnout of nearly 71 percent. Sri Lanka has been without a parliament since March.

President Gotabaya’s brother, former president Mahinda Rajapaksa, will be installed as prime minister, having held the role as caretaker since last November. He was previously president from 2005 to 2015.

The election was a disaster for the splintered opposition.

Former prime minister Ranil Wickremesinghe lost his constituency, while his United National Party, which had 106 seats in the outgoing parliament, was reduced to just one seat. Samagi Jana Balavegaya (SJB), a breakaway faction from Wickremesinghe’s party, got 20 percent of the vote and was a distant second with 54 seats. The moderate Tamil National Alliance, which had 16 seats in the outgoing parliament, was left with just 10 seats in the new assembly, which is due to sit on Aug. 20.  Jathika Jana Balawegaya won three seats. Controversial Buddhist monk Ven. Galagoda Aththe Gnanasara Thera can also enter parliament with one seat won by the Jana Bala Party from the national list.

Indian Prime Minister Narendra Modi was among the first world leaders to congratulate Mahinda Rajapaksa on the SLPP’s victory. The SJB is headed by Sajith Premadasa, the son of Ranasinghe Premadasa, a former president who was assassinated in 1993 by the Liberation Tigers of Tamil Eelam (LTTE), a Tamil militant organization. The SLPP is expected to use its resounding victory to enact constitutional changes. Gotabaya Rajapaksa, the country’s wartime defense chief, won the presidential election last November with 52.25 percent of the vote. He and his elder brother Mahinda are popular with the Sinhala Buddhist majority after being credited with defeating the LTTE in a 26-year civil war that ended in 2009 after the deaths of at least 100,000 people. In the run-up to the election, Christians shared a special prayer for voters to choose the best candidates who would not follow the path of selfishness. Ruwan Minsara, a survivor of the Easter bombings in April 2019, said the new government was voted to govern all communities including Christians, Hindus, Muslims and Tamils. “We hope that the new government will soon bring justice to Easter Sunday bomb victims,” said Minsara. Wearing face masks and maintaining physical distancing, voters used their own pens to mark ballot papers as they cast their votes.