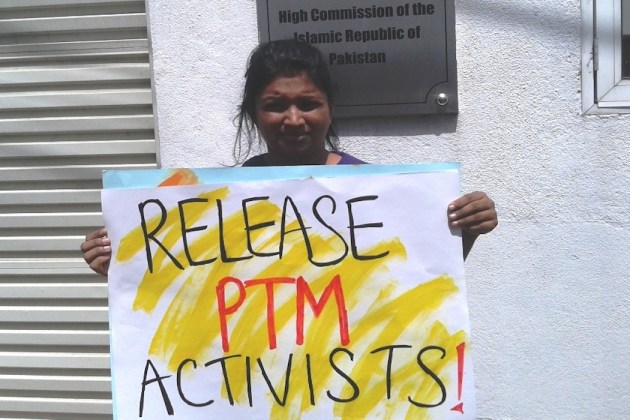 Mauri Jayasinghe holds a placard to show solidarity to Pakistan’s disappeared at a demonstration organized by South Asian Solidarity in Lanka on June 12 in front of the Pakistan High Commission in Sri Lanka. (Photo by Niranjani Roland/ucanews.com)

Relatives of some of the thousands who have disappeared in Sri Lanka demonstrated in front of the Pakistan High Commission in Colombo to demand justice for disappeared Pakistani activists.

Mauri Jayasinghe, 35, who has been fighting for accountability for her abducted husband since 2013, held a placard reading “Release Pashtun Tahafuz Movement activists” to show solidarity with Pakistanis suffering the same plight.

She was six months pregnant when husband Madushka Haris De Silva disappeared in September 2013. She was abducted in Anuradhapura town in 2014 and threatened at gunpoint not to campaign on behalf of her husband, but she was eventually released.

“There is no separate pain and agony for different nations. It is the same for everybody,” said Jayasinghe.

“Missing someone without knowing their whereabouts is a great loss. I can understand the feeling in the hearts of relatives of the Pakistan disappeared.”

According to Pakistan’s Commission of Inquiry on Enforced Disappearances, 1,577 cases are pending. They involve political dissidents, activists, suspected terrorists and critics of the military. The Pakistan Human Rights Commission estimates there are 3,000 unresolved cases.

South Asian Solidarity in Lanka, a network of independent activists, recognizes the universal nature of the struggle against enforced disappearances.

Omar Waraich, South Asia deputy director of Amnesty International, said enforced disappearances had been a big problem in Pakistan for a long time.

“People are being disappeared in all parts of the country. Human rights activists face challenges for what they say and what they believe peacefully,” said Waraich, a Pakistani.

“The disappearances often take place in Balochistan, Karachi, Punjab and major cities. They often lead to torture and in some cases death. Pakistan is an elected member of the U.N. Human Rights Council, so it has an obligation to work for the highest standard of human rights in the world. We see Pakistan sadly fail to meet this standard on a regular basis.” 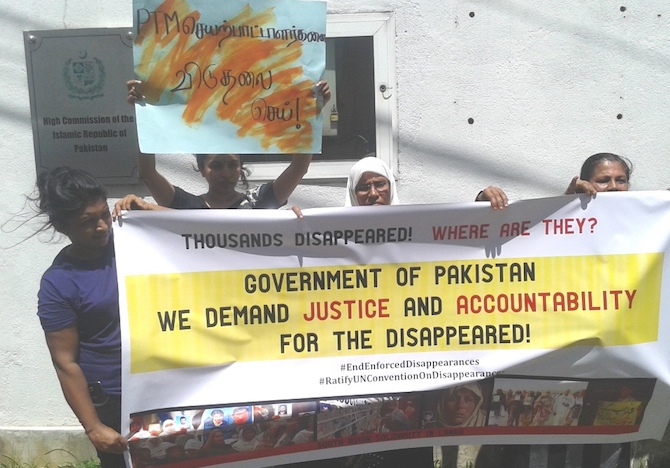 According to protesters, activists in the Pashtun Tahafuz Movement (PTM) in Pakistan have also been abducted. After peace activist Raza Khan was abducted last December, the FindRaza campaign was launched on social media.

“I met a Pakistani woman whose husband was disappeared. Still she is struggling to find justice,” she said.

“Her husband Masood Ahmed Janjua was disappeared in July 2005. He was a businessman. After his disappearance, she started to provide legal support to prisoners in foreign countries and financial support to families of victims of enforced disappearance and torture in jails and detention centers,” said Eknaligoda.

“Stop enforced disappearance and take a speedy step to find justice for the relatives of the disappeared in Pakistan.”

Eknaligoda held a banner reading “Government of Pakistan, we demand justice and accountability for the disappeared.”