Sri Lanka: The New Regime and the Revolution 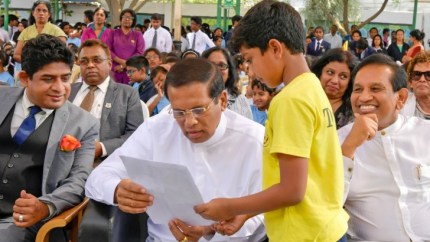 “The most perilous moment for a bad government is one when it seeks to mend its ways.” ― Alexis de Tocqueville, L’Ancien Régime et la Révolution (1856)

At a meeting in Davos in 2017, Chinese President Xi Jinping made a speech supporting the agenda on globalization. Meanwhile, back in the US, President Trump was highlighting the importance of the US confining its national boundaries. “America only does not mean America alone,” said Trump in Davos. The president received a standing ovation for a speech that resonated the importance of collective action to build a better world. However, global reality, with its increasing political fractures, tells a different story.

Sri Lanka too is witness to political bipolarity at a critical moment in the island’s political narrative. For a closer examination of the developments underway in Sri Lanka, a study of the ‘Silent Revolution’ of 2015 against the monumental French Revolution provides illuminating points for analysis. Alexis de Tocqueville ideas on the French Revolution state that the “chief permanent achievement of the French revolution was the suppression of those political institutions, commonly described as feudal, which for many centuries had held unquestioned sway in most European countries. The revolution set out to replace them with a new social and political order, at once simple and more uniform, based on the concept of equality of all men.”

In comparison, what did Sri Lanka’s Silent Revolution achieve? Did the present government take precautions to make sure of importing nothing from the past into the new regime? What kind of process did the new regime follow? And what restrictions were set to differentiate themselves in every possible way? Was the word revolution used simply to fulfill a political aspiration?

Messages from the leadership are loud but inconsistent. Sufficiently exposed to bipolar political promises, public absorption of rhetoric has reached exhaustion. This is a poor note to send the electorate after casting their franchise at the local elections in Sri Lanka. Looking at this bipolarity from the top, one could design a “political bipolar index (PBI)” to assess local leaders’ (lack of) responsibility.
For politicians, political power remains the raison d’être. The struggle toward electoral victory, subsequent power struggles, and influence over public policy is visible across societies. In certain dignified societies, persuasion remains an acceptable choice over coercion. However, in some societies, politicians prefer the baton, tear gas, and machine guns. In an orderly society, coercion and conflict are transferred from the battleground to councils of law.

Some regimes have the muscle to ward off a revolution while others fail. Sri Lanka’s Rajapaksa regime failed to ward off the Silent Revolution in 2015. It was a peaceful revolution by ballot. To apply de Tocqueville’s words, “The regime which is destroyed by a revolution is almost always an improvement on its immediate predecessor, and experience teaches that the most critical moment for bad governments is the one who witnesses their first steps toward reform.” Today, the Sri Lankan government is experiencing what Tocqueville wrote in 1856, in his book on the French Revolution.

The local government election results revealed the mood of the polity. Local elections remain a perfect barometer to identify political cyclones on the horizon. Then one could also name the next revolution ‘Silent Revolution 2.0’ in 2020. An actual revolutionary scenario will offer new faces and fresh voices. However, such a reality remains doubtful.

Sri Lanka celebrated 70 years of independence on 4 February this year. The country displayed its achievements since independence in the print and electronic media. Alongside its achievements, the country has also faced nearly a thirty-year war with two youth insurrections in 1971 and 1989. The revolt was against the political system of that time which failed to create better economic conditions particularly in the field of employment. The situation has not improved. The economic condition worsens with high borrowings and debt. This was indicated by the latest Moody’s Asia Pacific rating. Sri Lanka did not rank favorably, especially when compared to with 24 Asia Pacific countries. Earlier, the World Economic Forum’s Global Competitiveness Index report reflected the same dismal ratings.
Since independence, successive governments have failed to make Sri Lanka a developed nation. A toxic mix of high-level corruption and bad governance remain at the heart of the problem. According to senior journalist, Malinda Senevirathne, “a system of government run by the worst, least qualified or most unscrupulous citizens” and an absence of technocrats with the right skill set to deliver could be the cause of this situation.

President Sirisena’s findings from the Central Bank Bond Commission and the revelation of malpractice to the public should be appreciated. His actions reflected transparency at the highest level. In a country like Sri Lanka where the appearance of civil power is little more than a wispy gauze veiling the reality of political power, disclosures from the Bond Commission are grist for the mill of politics-as-usual and not a force disrupting the status quo. Only if appropriate action is taken following the revelations contained in the report and the funds recovered to the public can progress be measured regarding restoring civil power over political power.

In this revolutionary political moment that began in 2015, revolutions within revolutions are needed to harness the scattered and disgruntled polity. The ballot in hand has proven that the results will be a clear epiphany.

*(The author is a visiting Professor for Geopolitics and Global Leadership at the Northern Kentucky University(USA) and the Director General of the Institute of National Security Studies Sri Lanka, this article was initially published by the IPCS, New Delhi for Dateline Colombo http://www.ipcs.org/article/south-asia/sri-lanka-the-new-regime-and-the-revolution-5432.html , the views expressed are the author’s own)