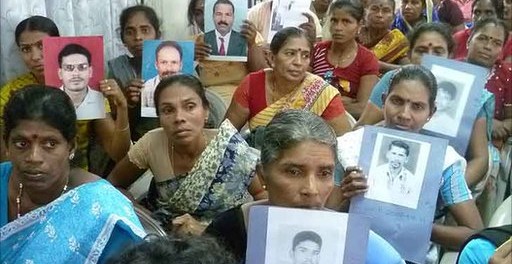 The forthcoming general election on August 5th, 2020 is crucial for the Tamils for their survival as a race and lives with respect, equal rights and dignity, and as a nation in Sri Lanka as Rajapaksas. Ranil Wickremasinghe. Sajith Premadasa and Buddhist clergy are openly advocating and moving to establish a Sinhala Buddhist unitary state in Sri Lanka.

The Tamils in the North and East who have been caught in the web of genocide since 1948 are now faced with a life or death situation and caught between the devil and the deep sea.

However, the defeat of the LTTE in May 2009 allowed the Tamil National Alliance to deviate from the pledges given to the LTTE and on the Tamils’ aspirations, and roam freely in its political manoeuvre or actions for Tamils and forging alliances or relationships with the ruling governments despite they are accused of committing war crimes and human rights abuses. TNA’s actions including its unfulfilled pledges, in reversal or failure to adhere to its commitments and undertakings given, are as follows:-

Failed to press and solicit the support of the international community for an independent international investigation, not even setting up of a local hybrid judicial mechanism accepted by Sri Lanka in the UNHRC Resolutions 30/1, 40/1.

ITK Leader Mavai Senathirajah vowed in October 2014 to launch a Sathyagraga Campaign in January 2015. This vow appears to be completely forgotten and dead.

Sampanthan correctly made the following bold statement in 2009 criticizing the international community, UNHRC and the UN: “We do not vote just statements of condemnations and pledges without any action”. Sadly and ironically, this statement can now be directed against Sampanthan and the TNA including all the other new leaders in the field.

Latest showering of praises of PM Mahinda Rajapaksa: “As a man of the people and was a source of strength to the people” during his 50 Years of service in parliament appears to have cleansed Mahinda of his alleged war crimes, etc. who actually was one of the sources of Genocide of Tamils in Sri Lanka.

Sumanthiran, an Attorney at Law from Colombo planted by Sampanthan to fight for the rights of the Tamils in the North and East appears to be a man with a hidden personal agenda which he recently disclosed that is to obtain a powerful ministry in the government. He possesses the skills to please both the government and the victimized Tamils by convincing explanations and cleverly wriggling out of any bad situation. His latest statements rejecting the crime of genocide against the Tamils and his prophecy that political settlement for the Tamils is a distant and remote possibility including his rejection of violent resistance as a last resort which was endorsed by the great and late internationally renowned Nelson Mandela are few examples of his cavalier and arrogant attitude to the wounded Tamils. Instead of focusing on the collection of evidence of genocide to make a case in the ICC (International Criminal Court) with the help of the UN Security Council member, he has casually dismissed the reference to the ICC thereby defending and protecting Sri Lanka in any international forum or tribunal to deliver justice and accountability.

In short, Sumanthiran is inflicting irreparable harm to the causes and the demands of the Tamils while there is a lurking threat and danger for a TNA break up and Sumanthiran possibly forming a party of his own.

The party formed and headed by the former Justice CV Wigneswaran, TPNF is an offshoot of TNA, when he left it by accusing TNA of non-performance and political somersault. Though the reasons are plausible, yet the retired Justice Wigneswaran has also so far failed to develop and grow his own party as an alternative to TNA. There is so far no ground map or clearly laid out agenda for the ground action. Issuing occasional statements exposing the Sri Lankan government’s moves in the North and East could serve as information to the Tamils, but without any follow-up and ground action to counter those moves is only a half-baked action. Thanthai Chelva’s life, sacrifices, and struggles appear to have been forgotten by the current Tamil leaders who are contesting in the North and East while calling for unity but unitedly hurling abuses at each other.

There is no iota of doubt, that the whole candidates and leaders of all Tamils: political parties are straining their muscles and energy to reach the parliament gates and once it is achieved, pledges and manifestos would remain frozen until the next parliamentary election. If speaking in parliament to an empty house and enjoying the perks and privileges of being an MP is the primary goal of the parties and its leaders, then it is high time that Tamils voters vote them out and send them back to their homes – “Lock, stock and barrel”. Justice CV Wigneswaran also recently stated his desire and wish to speak in parliament and it is hoped that once he achieves this privilege, he will not quit politics contented and then abandon the causes of the Tamils. However, his conflicting and contradictory statements like praising LTTE Supremo Prabaharan and recently blaming his rigid Eelam stand for our failure to win a reasonable solution, praising Sampanthan and then criticizing his failures and recently declaring his desire and intention to work with the TNA after the parliamentary elections are confusing and show his unpredictability and not sticking to his own pledges with determination and without vacillation. Justice Wigneswaran’s latest statement as to the growing military grip in the North and East is timely and correct but the question is who is there to halt it including himself.

TNMF headed by Gajendrakumar Ponnambalam is another political party which has to prove it’s worthiness by mobilizing people and mount non-violent campaigns for our causes while proving its commitments and sincerity including the execution of its election pledges. Occasional protests on certain occasions are not sufficient and are not the need for this crucial period facing the Tamils.

The entrenched and permanent vow of all Tamil leaders since 2009 is to “fulfill the national aspirations of the Tamils”.  It is the hope of the Tamil voters that this pledge will not be carried forward to the next parliamentary election in 2025 and beyond.

All in all, Tamils are in desperate in need of young, vibrant, strong, leaders who possess the political determination, courage and will to put a brake on the rising tide of Sinhala Buddhist supremacy, hatred, Chauvinism and hegemony before they swallow up the Tamils and obliterate their identity and cause their permanent extinction in Sri Lanka.

The reality is that the political solution to the 70-year-old nagging problem of the Tamils lies in the hands of the international community, UN, and India. The million-dollar question is who can move the above parties and make it a reality. It is the question of who will bell the cat!