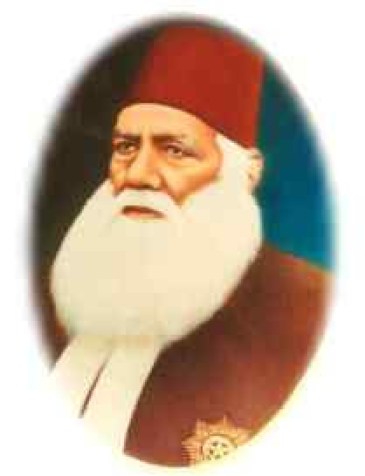 You would come across many people in your life who at times would save you from somebody’s wrath but very few who would then be concerned about your well being and then put you on the right path. Sir Syed Ahmad Khan was one among the few. After the mutiny of 1857, he not only emancipated Muslims from the hornet’s nest but also erased the misconception from the mind of the British that Muslims had any hand in the mutiny.

When he saw the social, political and economic conditions of the Muslims deteriorating day by day, he thought of an educational renaissance to overcome all the problems. He collaborated with the Brits and laid the foundation of Muhammadan Anglo Oriental College in Aligarh in 1877 where he implemented modern and scientific education, which was lacking in all the Muslim run institutions at that time. The college took the shape of a full-fledged university in 1920.
He strived hard to achieve such a marvelous feat. He saved the Muslims from the resentment of British and then showed them the path of success and enlightenment by the establishment of such a huge institution that too under the guidance and vigil of the British who till then were appetites of the blood of Muslims. He lived within the Brits and worked for his community in a polite and apt way.

Subsequently, he was branded as the British agent and declared Non-Muslim for working with the British and implementing scientific education in the college. But he scarcely gave a hoot to the stances of the common people of his community. Being farsighted, he knew that it would be better for them in the long run.
The institution then demanded a lot of sacrifices and Sir Syed gave every possible one. He sacrificed his time, honour, dignity and even his job. He begged door to door and collected everything that people gave, even the burst shoes and abuses that people used to hurl at him. The university that today stands tall in Aligarh has not come into being on its own, but it took the hard work and dedication of this renaissance man Sir Syed Ahmad Khan to emerge. He even disguised himself as a woman dancer in a fair to collect the donation for his college. He was not a common man but a royal person who sacrificed his dignity for his community. He was then successful in bringing about a great revolution in India and gave the world, the fruits of his hard work and adherence.

It is said that revolution often devours its children if not given a proper direction. Sir Syed was holding the helm of the Muslim community at that time, and he would have diverted the ship anywhere. But he put it on the track of education. He knew that it is only education which has the power to break any shackle and huddle of misery nonviolently. It has the power to enlighten the minds of the people who can then think about their good and bad themselves. Verily, time and history proved him right.

We have the cognizance of many revolutions, some of which occurred due to dominion and some with the threat of the sword. But they all were temporary and faded away with time. Because you can’t saber rattle someone too long. But the renaissance which comes due to education is unscathed like etched on a stone for eternity. Because it is the renaissance of one’s mind. It tends to change the perceptions and notions one possess. That is why it is unaltered and mighty effective.

Sir Syed Ahmad Khan was a man of great vision, a great political leader, reformer and educationist who left his impact in almost every moral sphere of life not only among Muslims but his co-religionists as well. His conscience was also concerned about their well-being and always guided their destinies time by time for a better future. As he is always accused of distancing Muslims from the Congress, but the very idea of Sir Syed was repleted with deep philosophy, which is beyond the mind of common people. His notions went on to impact a plethora of Muslim intellectuals, scholars, and politicians who then watered the very idea of Sir Syed’s concept of Muslim nationalism into becoming the ideological doctrine and soul of the very idea of Pakistan. His prolific authorship on the condition of the Muslims of the subcontinent during the British rule and his activism in the field of education helped formulate nationalist ideas in the Muslims of the region. The nationalism of which is the direct outcome of the Muslim nationalism which emerged in India in the 19th Century, masterminded by Sir Syed Ahmad Khan.

Post Script:- Is Kashmir wallowing in more unrest and turbulence nowadays as Sir Syed was during the time of British? If he single-handedly managed to tackle the situation so well, why can’t you? He doesn’t possess any manpower, institutions, and intellectuals as you do. Still, he was able to establish the Oxford of the East. If he was able to emancipate his illiterate community non violently from the hornet’s nest, why can’t you liberate a literate one? You got the resources, a peaceful ambiance than Sir Syed’s and above all a literate society with already established institutions. Certainly, your job is much easier. If your policies and ideas coincide with Sir Syed’s, you will see the new dawn of renaissance but if it differs you need to rethink and revive it.