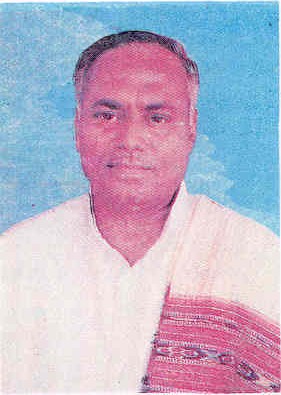 Amidst the names of politicians crowded the columns of power corridors in history but in contemporary political and cultural firmaments of India, nobody can match Sheikh Matlub Ali of Odisha. He was born on the 16th of December 1942 in a village called Dharoshyam Sundarpur, Sukleswar (Mahanga) in Cuttack district, and studied in the famous Ravenshaw College, Odisha. His life was a praxis of Gandhian principles with Nehruvian outlooks. He was an incomparable icon of Hindu Muslim unity in Odisha.  In his untimely death, Odisha lost one of her greatest sons and Odias lost their voice of reason. His death has created a void in the social, political, cultural, and literary world of Odisha. He has led a meaningful life both in the field of politics and literature.

Sheikh Matlub Ali was a very proud Odia, a Muslim, and an Indian nationalist. There was no conflict between his three different identities. He wears these three identities with equal pride. He represented the composite culture in Odisha, which resolved the differences. He was a symbol of Hindu Muslim unity in the state. He knew the Hindu religion as much as he knew Islam. He studied different religions in-depth and practiced secular politics in his everyday life. He contributed immensely to popularising Jagannath culture. He was a fine polemical speaker of interfaith dialogues, excelling in colloquial Odia irony and humour. He popularised composite Odia culture and practiced it in his everyday life. He led a life of Hindu Muslim unity and brotherhood. He was a leader of Hindus, Muslims, and all socially and economically marginalised communities in Odisha. His house was always open to all.

Sheikh Matlub Ali was a leading luminary in shaping the democratic, secular, and progressive politics and literature in Odisha. He was widely accepted by all sections of Odia society irrespective of political differences and party lines. His integrity, tenacity, and compassion are rare qualities in Indian politics. He was a consummated politician but the politics of power could not destroy his human qualities. He moved beyond the arithmetic of electoral politics. He was defeated in electoral politics based on propaganda and corporate media management. But he never ceased to work for the people for a day even after electoral debacles. For him, the election was a means to do social work for people. He stood with people during their everyday crisis, whether it was floods and cyclones in the coastal belt or drought in southern Odisha, he was always there to ensure relief and rehabilitation work. He worked with both international and national NGOs to expand his social work among lower caste and working-class people in the state. He was dedicated, committed, generous, principled, and influential far beyond his native Mahanga constituency in Odisha. He was popular in the state both for his commitment to politics and literature focusing on empowering people and their welfare. His politics were shaped by Gandhian ideals of peace, secularism, and democracy. As a Gandhian, he stayed with the Congress Party till his last breath. He was elected four times to the Odisha Assembly and contributed immensely to the growth of irrigation infrastructure, rural development, and education in the state as a minister. He was a lifelong champion of the rural poor and other causes he believed in, argued for his ideas resolutely but briefly with all clarity and backed by the detailed study. His gentle manner is rare in politics today.

Personally, I lost a father like a friend and going to miss his guidance on life and career. I had many memorable meetings with him for over twenty years. One meeting is imprinted vividly in my memory lane, which defines my relationship with him. It also reveals Sheikh Matlub Ali as a person. Before leaving for Britain for my doctoral research, I met him in his Bhubaneswar house in September 2003. He was immensely happy and concerned as if I am one of his own family members. He was worried about my financial condition, health, and weather in Britain. He introduced me to his friend Mr. Prafulla Mohanty, an internationally acclaimed Odia painter, who lives in London. He called him and asked him to look after me. He discussed my research topic and asked me not to fall into European outlooks while analysing the Indian context. He advised me to look after my health and not to forget our Odia roots. In the hurly-burly of life, I regret that I was not in touch with him regularly but every meeting was full of warmth, love, and care. He was a Congress man in letter and spirit. I am a communist. We used to discuss, debate, and disagree passionately but there was never an emotional and social breaking point because of his ability to assimilate himself with differences without losing his own ideological position in life. During one of our meetings, he discussed the cultural and social problems of the Marxism Indian context. He argued that Indian society is a diverse society and no single philosophical outlook can analyse and be a single alternative in India. He outlined it further by arguing that vile of property-based caste order and religious reactionaries are twin dangers to class struggle and progressive politics. Therefore, he argued for secular, liberal, and democratic politics for a slow transition towards socialism in India. He was insightful in his analysis and open to self-reflective criticisms. His personality reflects in his political ideals, organisational style, and writings.

Sheikh Matlub Ali’s death is an irreversible loss to Indian and Odia politics. His political, social, cultural and literary legacies will dazzle and dazzle as luminous stars to guide the troublesome Indian political sky towards peace and prosperity. It is important to uphold his contributions and celebrate his life to ensure harmony and happiness in Odisha, he loved the most.