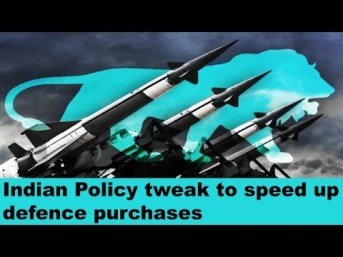 Amidst all the looming actions, the recent upsurge in India’s defense budget by 10 percent appears quite dubious; as it has now reached up to $43 billion. Whereas, the increased convergence of interests between the United States and India specifically in the strategic sector makes the neighboring countries apprehensive of their growing defense procurements; this continuous trend of military modernization threatens to disturb the existing regional balance.

According to a report published by Stockholm International Peace Research Institute (SIPRI), since the last four years, India’s defense imports were far greater than those of China and Pakistan. However, India has now undergone a shift in its policy which was introduced in the year 2014. With the primary aim of making India, ‘a global manufacturing hub’ which in turn will encourage both the multinational and domestic companies to manufacture defense products within the country. Such integration would then be a major game changer for India. From the past decade, India has significantly worked in revamping and modernizing the military infrastructure.

Congruently, New Delhi and Moscow have concluded a deal by which India will acquire ‘five regiments of Russian made S-400 advanced Air Defence Systems. The S-400 in comparison to its predecessor has an upgraded radar system; nonetheless, it can purportedly fire four new kinds of ‘surface-to-air (SAM) missiles. Moreover, an understanding has been reached by both the states to hold mega war games in October; their armies, navies and the air forces will for the very first time carry out such an exercise. Until now, India has not participated in a tri-services exercise at this vast scale. On the other hand, India’s modernization efforts have been upheld by the United States, widely. As stated recently by Admiral Tom Harris that the United States is willing to help India in enhancing its military capabilities in ‘significant and meaningful ways.’ US acknowledgment of India as primary defense partner is expected to boost further the Indo-US defense ties and open new channels for US’ defense majors to offer and make their products in India. This convergence of the two governments will upgrade the collaboration at different levels. This expanded resistance participation will prompt the advancement of robust defense industry for India.

Furthermore, by 2020 India will be acquiring the advanced medium- range surface to air missile system which will have the capacity of shooting ballistic missiles and fighter jets; would also be able to attack from the range of 70kms. Developments like these, possess the tendency of increasing the already mounted regional precariousness.

Proactive strategies, renewed defense settlements, and the conventional military build-up enable Pakistan to take counter measures while balancing the strategic equilibrium at the same time; for the Pakistani establishment is right to track Indian defense spending carefully, the reason being India remains in terms of its military capabilities, the principal threat to Pakistan’s security. Be that as it may, a level-headed, consistent point of view is truly what is required instead of the wild guessing in some hawkish quarters.

Nevertheless, the over-dependence of India regarding its defense procurements would eventually have a negative impact on country’s aspirations of being a global manufacturing hub. Besides, India is by and by the world’s largest buyer of conventional weapons, with an upwards 100 billion dollars anticipated, that would be spent on modernizing defense forces following the coming decade. India’s immediate neighborhood developments broadly identified the need for swift modernization of its military. However, its indigenous development of modern defense hardware continues to remain a concern for it also lacks sophisticated weapons and armory.

India is directing a huge scale modernization of its military mainly in six key areas namely land, air, sea, nuclear, outer-space and cyberspace. This modernization is often obfuscated by logical limitations in consort with poor decision making its policy aspiration likewise for defense self-sufficiency remains largely elusive. Additionally, the major disputes involving India and its neighbors are to say ‘land centric,’ highlighting the predominant role of the army in Indian security context.

To conclude, allotting this much amount of disbursements would further act as an escalating agent in the already present disputes. Though the realization which appears necessary to occur is that where do we draw the line in this ever-growing arms race.