Sasikala family should be out of AIADMK for party unity: Former CM O. Pannerselvam! 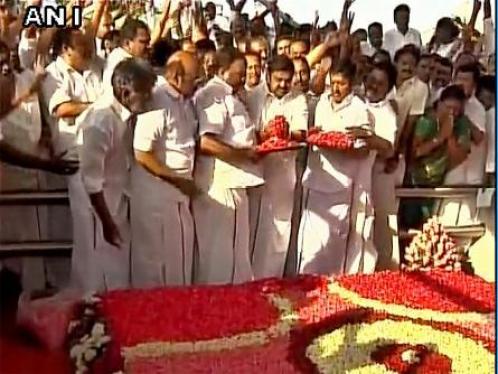 The ruling AIADMK faction “Amma”, now operating under jailed Sasikala’s guidance seems to be keen to regain the party symbol somehow by bringing back the O Panneerselvam faction without effecting any basic changes in the party or government. More importantly, the Amma AIADMK Party and government would still be under the grip of Sasikala family and refuse to shed the Mannargudi clan links.

There has been a move from both factions to reunite the party factions on a plan accordingly, O Panneerselvam to be the party’s general secretary and E Palanisamy to remain CM. Top Ministers of the AIADMK (Amma) government called a late night press conference in Chennai on April 17. The ministers, divided in two camps, held meetings at the residents of Thangamani and Udumalai Radhakrishna.

The OPS camp has agreed for patch-up, “if their conditions are accepted”. According to NDTV, E Palanisamy could remain as the chief minister, whereas, Panneerselvam could be awarded the post of AIADMK general secretary. The report further claims that the sudden decision was taken by AIADMK top brass considering the threat of arrest looming over the party’s incumbent defacto leader TTV Dinakaran.

It was earlier reported in the media that former CM O. Pannerselvam had earlier expressed his desire to form a united AIADMK without conditions but today speaking to media at his home town Periakulam from where he has been elected to state assembly, that so long as Sasikala and family remain in the party there is no chance for genuine reunion of factions.

With ruthless action to remove O. Panneerselvam from the CM and treasurer posts, Sasikala is the root cause of all troubles the party is facing since the demise of Jayalalithaa.

OPS made it clear that his faction will not go in any kind of merger if their demands including removal of Sasikala as party chief, are not accepted. The OPS factions have asked a probe in Jayalalithaa’s death and stand by it even as the talks of unification are going on between the two camps. OPS alleged that money was paid to the voters for the RK Nagar bypolls. “During the election campaigning in RK Nagar many malpractices were done, Rs. 4000 offered to voters. We have submitted all this to EC yesterday and asked to inquire into matter (election for AIADMK office-bearers after Jaya’s demise),” he said.

The AIADMK was split on February 7, 2016, when Panneerselvam lashed out against AIADMK supremo VK Sasikala, accusing her of usurping power against the will of late chief minister J Jayalalithaa. Subsequently, Panneerselvam was shown the door by party top brass. The two warring camps of AIADMK recently fought over the the party symbol, which was eventually freezed by the Election Commission. Both the camps were compelled to use different symbols moving into the by-election for RK Nagar assembly segment, the seat which was represented by Jayalalithaa. Earlier in the day, senior AIADMK leader M Thambidurai pitched for reconciliation between the two camps. “There was no split in AIADMK, but only dissidence. Things could be resolved if both the factions talk. We are ready for merger if OPS camp comes forward,” he said.

The ruling AIADMK (Amma) prepared the ground for a possible truce with the rival AIADMK (Puratchi Thalaivi Amma) with a consultative meeting of Ministers held at the house of Electricity Minister P. Thangamani here, “welcoming” former Chief Minister O. Panneerselvam’s (OPS) statement he was prepared for a rapprochement “if approached”. Briefing journalists after over an hour-long meeting of Ministers, Finance Minister D. Jayakumar said, “We discussed only two things. The party has to be united and an affidavit to be filed before the Election Commission to retrieve the ‘Two Leaves’ symbol.

It not yet clear if speculation that Sasikala had resigned as party general secretary is true. Law Minister C.Ve. Shanmugam interjected and said, “it is a blatant lie”.   Jayakumar said he did not have any information about her resignation.

In a twist to the developments of the last 24 hours, the former Chief Minister, O. Panneerselvam, on April 18 Tuesday ruled out the merger of the two factions of the AIADMK if V.K. Sasikala remains in a united party. He demanded the ouster of her family, including T.T.V. Dhinakaran, from the AIADMK.

The AIADMK (Puratchi Thalaivi Amma) leader said, “MGR and Amma were always against family rule. So, we will not rest until the Sasikala family is thrown out of the AIADMK. Party should not be in the hands of a family.” Earlier, sources in his camp said talks with the other camp would be only with conditions. “This talk of ‘no conditions’ is all bunkum,” they added. Panneerselvam made it clear that he cannot go back on his core demand of a probe into the ‘mysterious’ death of the former Chief Minsiter, Jayalalithaa. “We will continue our demand for a CBI inquiry into the sudden demise of Jayalalithaa.”

Panneerselvam has expressed the confidence that the Sasikala faction leaders would approach him for merger talks. On speculations about the merger of the two AIADMK factions and that he was going to be made “general secretary,” he said no one has approached him for it so far. “If approached, we are ready to sit and talk and I have confidence that they [leaders] will come [for talks],” he told reporters at the airport.

MLAs meet on board INS Chennai

On board ”INS Chennai”, Finance Minister Jayakumar refused to attach any significance to an MLAs meeting. Earlier in the morning, responding to Chief Minister Edappadi Palanisami’s call, legislators of the AIADMK AMMA assembled on board ”INS Chennai” and ”INS Sumedha” for a ‘day at sea’ event.

Late on Monday evening, as many as 26 Ministers met at Electricity Minister Thangamani’s official residence on Greenways Road in Chennai.Another meeting was held at the bungalow of Housing Minister Udumalai Radhakrishnan, in which a few Ministers participated. Later, they joined the meeting at Mr. Thangamani’s residence.

Welcoming Panneerselvam’s ”call” for unity, Jayakumar said the AIADMK lawmakers discussed ways to unite the party and get back the ‘Two Leaves’ symbol frozen by the Election Commission. Jayakumar denied rumours that Sasikala and Mr. Dhinakaran have resigned from the party. ”This is like a sibling fight. We’ll join hands soon”, he said. All 128 AIADMK MLAs are staying united and favour a merger.

Deputy Speaker of the Lok Sabha M. Thambidurai left for New Delhi on Monday evening. Mr. Thambidurai may meet Election Commission officials regarding the tussle over the ”Two Leaves” symbol.

Chief Minister Edappadi K. Palaniswami and Thambidurai meet twice fuelling speculations. When Thambidurai spoke to media at the Secretariat, he too welcomed Panneerselvam’s remarks. Going by the footage shown on television channels, women Ministers appeared to have stayed away from both the meetings. But the prominent absentee was Mr. Palanisami. Mr. Jayakumar, S.P. Velumani and C. Ve Shanmugam answered queries from journalists. The Ministers said they would discuss the possibility of merger with OPS camp after Mr. Dhinakaran comes back to Chennai.