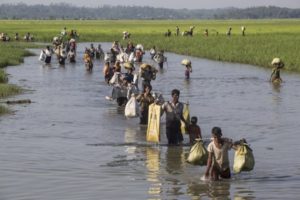 Following the attack by Rohingya militants’ 25 Aug’17 attacks on 30 police posts and an army base, the Myanmar Army started ‘ethnic cleansing’ in Muslim majority Rakhine state. The term ‘ethnic cleansing’ was already used by UN official in September of this year but the US Department of State was reluctant to use the term before. However, the US Secretary of State Rex Tillerson used it on 22NOV’17. Nevertheless, the good news is, on 23 November both Bangladesh and Myanmar government finally signed “Arrangement on Return of Displaced Persons from Rakhine State” based on the 1992 agreement. On the other hand, the agreement says, it will be done in ‘a reasonable time.’ We hope both parties will have answers to some significant questions we have in our mind regarding the agreement.

About the starting time of repatriation, we came to know that it will start in two months from the signing of the deal but both parties couldn’t agree on the ending deadline, which is already a bad sign. There is no agreed upon number how many Rohingya people flee from Myanmar and how many are going back. Because there is already confusion in numbers. Just to give an idea to the reader since 25 August 2017 more than 622000 Rohingya people came to Bangladesh. But before there were already more than 400000 Rohingyas living in different regions of Bangladesh as refugees. They only agreed on those who flee after 09 October 2016 and 25 August 2017. What will happen who were already there in Bangladesh?

In different news media, the international community has seen killing Rohingya people, burning their villages, raping women and girls, and stealing possessions by the Myanmar Army. But the army exonerated itself regarding the Rohingya crisis and denied all the blame. It seems there will be no trial for who is responsible. Given the fact, on 22 November UN tribunal convicted former Bosnian Serb military commander Ratko Mladic of genocide and crimes against humanity for massacres of Bosnian Muslims and ethnic cleansing campaigns, and imprisoned him for life. Interestingly the very same day the US came up with a strong protest against this crisis.

The US Government is trying to raise pressure on Myanmar’s military and civilian leaders. However, Murray Hiebert, a Southeast Asia analyst argued the US State Department’s threat and terms of sanctions will likely to have limited or no impact on the field. Because Myanmar’s two years old democratic government led by Nobel Peace Prize laureate Aung San Suu Kyi doesn’t have any control over the military generals with whom it shares power. Likewise, this ‘sanction’ strategy might create more distrust between the US and the Myanmar Military and government and will push them towards China and Russia.

The Amnesty International reported Myanmar as a state institutionally discriminated and segregated the Rohingya community from the rest of the country. Will they have programs to integrate the Rohingya community with the rest of the country? The report also states that the existing laws, policies, and practices are the part of the systematic attack against the civilian population. They even describe the attacks are crimes against humanity as defined in the international law. Will we see the provisions of the trials and prosecution of the Burmese Generals?

Every aspect of Rohingya lives has been restricted, and their rights are routinely violated. Even the ‘1982 Citizenship Law’ is used in a way that leads to racial hatred. Also, the Myanmar authority didn’t provide any identity or residency documentation to the Rohingya population. There are restrictions and complexities in registering newborn Rohingya babies. Even during the times of the mandatory ‘household inspections’ people have to be in their homes. If they are not there the authority can delete their names from the official residency lists. What happens to those who are not an official resident?

Rohingya populations have restrictions on movements and accessing health care systems since 2012 in Myanmar. Likewise, Rohingya children are not allowed to attend the government-sponsored educational institutions with the ethnic Rakhine children. Sometimes the government teachers refuse to teach them. This community is not allowed to practice their faith openly, and there are restrictions on their public gathering for worshiping. These led them to systematic exclusion from the political and social scenario. This is not only in the state of Rakhine but also all over Myanmar. Will they take any action to prevent this from happening after they go back to their country, Myanmar? Is it safe for them to return?

The situation in Myanmar is intolerable, illegitimate and it is unacceptable. If both the countries fail to address these problems will lead to greater suffering and risks instigating further conflicts. It is time to combat discernment, isolation, and violence against humanity.

We hope along with the ‘deal’ there will be a plan of action for reviewing laws, regulations, policies, and practices to remove discriminatory standards and legal accountability for Myanmar Government and Military Generals for their safe return. It is time to hold them accountable for the crisis, and responsible people must be brought under justice.