Rohingya Genocide and Clash of Civilizations 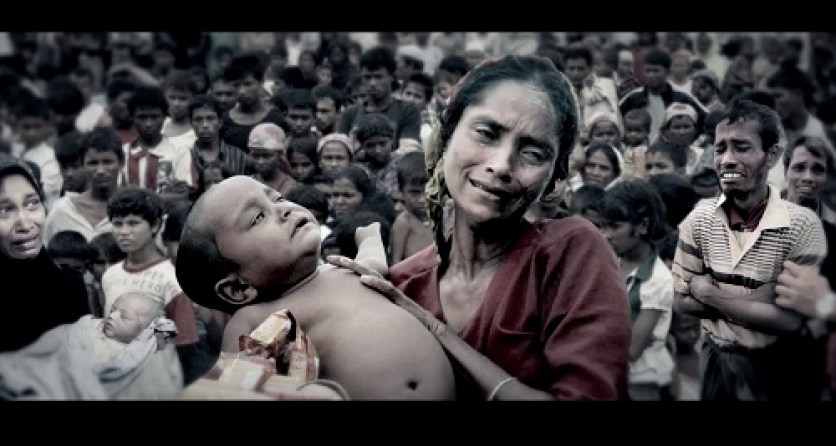 During past few days, the most potent images and videos depicting rivers of blood beheaded children, and dead bodies lying on streets and burning people alive have bought a new debate onto the issue of Rohingya Muslims. This is a continuous progrom of genocide against the Rohingyas.

Myanmar otherwise known as Burma was one among 48 states that voted for the adoption of the Universal Declaration of Human Rights (UDHR) by the United Nations General Assembly in 1948. It states that “Everyone is entitled to all the rights and freedoms outlined in this Declaration, without distinction of any kind, such as race, color, sex, language, religion, political or another opinion, national or social origin, property, birth or another status”. Even, Article 5 of the UDHR states that “No one shall be subjected to torture or to cruel, inhuman or degrading treatment or punishment.”

Unsurprisingly, Human Right Organizations, Amnesty International, Western Powers and international media groups like the BBC and CNN are quite upon the violation of Universal Declaration of Human Rights over this genocide that has no parallel in the world today. Even the response of Aung San Suu Kyi, one of the prominent leaders in Myanmar and a Nobel laureate stated; “I don’t think there is ethnic cleansing going on against the ethnic minority. I think ethnic cleansing is too strong an expression to use for what is happening”, which indicates her bias towards the Rohingyas and her plans for the future. The Human Rights Watch stated that the Government of Myanmar has to “stop the offensive” and they should allow ‘humanitarian assistance’ to Rohingya Muslims. Now the question is why these IOs and ROs are only resisted to statements, and they are waiting for permission from Government of Myanmar to help the Rohingyas. History is full of incidents where Western powers never waited for permission if they have interest in a particular region.

On 26 September 2001, just fifteen days after the 9/11 attack, the U.S. covertly dispatched members of the CIA’s Special Activities Division led by Gary Schroen as part of the team “Jawbreaker” into Afghanistan, forming the Northern Afghanistan Liaison Team. The US did not wait for approvals from any international bodies to engage in Afghanistan; rather they commanded rest of the world to choose between being either for or against the US led war on terror. After years of sacrifice, states like Pakistan are still asked to ‘Do, More, Do More.’

Then again on 20 March 2003, The United States with their several coalition allies invaded Iraq to save the world on a false pretext that Iraq possessed weapons of mass destruction. In the genuine case of genocide against the Rohingya Muslims, they remain quiet. Hundreds of Rohingya women were gang raped even after Myanmar signed the ‘Convention on the Elimination of All Forms of Discrimination against Women (CEDAW).’ The young boys are burned alive instead of educating after ratifying the ‘Convention on the Rights of the Child (UNCRC)’ on July 15th, 1991. Not a single peace keeping mission was sent to safeguard people who were subjected to human rights violations.

Samuel P. Huntington argued that World politics is entering a new phase, where the divisions among humankind and the dominating source of conflict will be cultural. Nation states will remain the most powerful actors in world affairs, but the principal conflicts of global politics will occur between nations and groups of different civilizations. The clash of civilizations will dominate global politics. The fault lines between civilizations will be the battle lines of the future.

The case of ethnic cleansing in Myanmar is the exact example of what Huntington wrote back in 1993. The western powers are quiet on the Rohingya issue as the victims are Muslims, a target of their opposing civilization. While America cries out ‘DO MORE’ to continue their so called war on terror, they have a ‘DO NOTHING’ policy to save the Muslims in Myanmar.