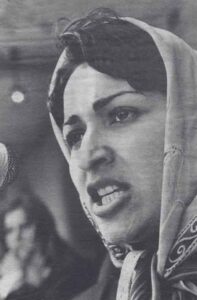 Meena founder of RAWA speaking in 1982

The great Afghan woman martyr, Meena (1956-1987) founded  the REVOLUTIONARY ASSOCIATION OF THE WOMEN OF AFGHANISTAN (RAWA) in 1977. She was assassinated by the hired goons of KHAD (Afghanistan branch of KGB) and their fundamentalist accomplices in Quetta, Pakistan, on February 4, 1987.

In the following is reproduced a part of Meena’s poem which she wrote few months before her martyrdom.

I’m the woman who has awoken
I’ve arisen and become a tempest through the ashes of my burnt children
I’ve arisen from the rivulets of my brother’s blood
My nation’s wrath has empowered me
My ruined and burnt villages fill me with hatred against the enemy
Oh compatriot, no longer regard me weak and incapable,
My voice has mingled with thousands of arisen women
My fists are clenched with fists of thousands compatriots
To break all these sufferings all these fetters of slavery.
I’m the woman who has awoken,
I’ve found my path and will never return.

Shamsul Islam is a retired professor of Delhi University