INDIA VS PAKISTAN: WHY CAN’T WE JUST BE FRIENDS 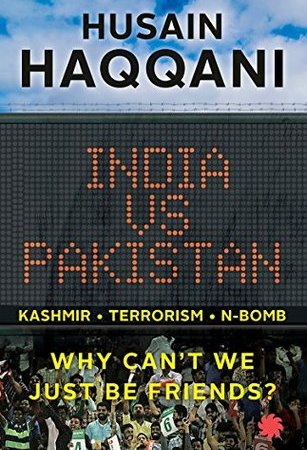 Book Review:INDIA VS PAKISTAN: WHY CAN’T WE JUST BE FRIENDS  by Shakoor Ahmad Wani

It would be platitudinous to say that India and Pakistan share a particularly acrimonious relationship. Though only a minuscule fragment of the generation that witnessed and suffered partition is alive, the two nations still find it difficult to move beyond that traumatic rupture. Why do the two cognate countries continue to see each other as staunch enemies, each defining its interests in opposition to the other, merits an inquiry, knowing all too well that both founders of the two states desired amicable relations. Gandhi regarded Pakistan as an estranged brother who needed to be won over and Jinnah favoured an association resembling “American arrangements with Canada” (p. 1) Nehru more than once spoke of “the basic urges, historical, cultural and economic, that tend to bring us nearer to each other” (p.10) How then did the two nations end up where they are today? What sullied the visions of the founding fathers? It is these questions that occupy much of the discussion in Husain Haqqani’s new book “India vs. Pakistan: Why Can’t we just be Friends?” Husain’s eclectic background as a journalist, academic, ambassador and advisor to four Prime Ministers, mirrors both the style and content of the book. An easy read, the book is replete with anecdotes and avoids academic jargons, appealing in equal measure to both the scholar and layman. In the times of communally charged nationalist frenzy gripping South Asia, writing objectively and critically of one’s state is no easy task and carries it with many accusatory baggage. Husain shreds nationalist biases and offers a critical account of his country’s ills, anxieties and insecurities. The animosity pervading every aspect of bilateral relations is an outcome of both the countries skewed policies, but it is Pakistan’s enduring paranoia over its concerns with security and parity with India or what the author calls “Pakistan’s near pathological obsession with India” (p. 7),  which complicates the relationship. Where did such paranoia emanate from? Why does it only pervade political and strategic thinking in Pakistan? And what accounts for its persistence even after six decades of partition?

Born in the crucible of a bloody partition involving massacres and population dislocations of gargantuan proportions, the newly emergent states were challenged by the daunting tasks of nation building and state building. Indian state succeeded in constructing a resilient democratic polity, Pakistan lapsed into prolonged periods of military authoritarianism that engendered and fuelled a narrative “mixing legitimate concerns about security with doses of paranoia” (p. 9). Partition placed Pakistan in a precarious position, inheriting a disproportionately large armed forces but a truncated revenue base. The country needed to make a choice and bite the bullet. Reduce the size of armed forces to a level consistent with the security of the country and imperatives of a viable democracy. Failure to reconcile the dichotomy produced a national security state, where concerns over security and defence overwhelmed any other debate on the establishment of a developmental state. The overarching preponderance of military apparatus spawned only those narratives and policies rationalising its existence and legitimising maintenance of a highly unsustainable defence budget. Military’s legitimation discourse emphasising a highly amplified threat from India   engendered a hyperbolic and pervasive nationalist narrative in which armed forces and Pakistan Army in particular were seen as the saviour and guardian of nation. Husain captures Pakistani case succinctly, “Pakistan was not like other countries that raise an army to deal with threats they face, it had inherited a large army that needed a threat if it was to be maintained” (p. 15).

Husain weaves the discussion on India and Pakistan around three themes –Kashmir, terrorism and nuclear bomb which he finds as complicating an already complex relationship. However, it is on Kashmir where Husain errs. His justifiably critical appraisal of Pakistan veers somewhat ‘tendentiously’ towards India. At more than one place, author appears to be uncritically soft on India. He regards India’s apparent willingness to legitimise status quo by recognising LOC as international border, as an offer of “territorial concession” (p. 63). Pakistan’s insistence on a solution based on Kashmiri people’s aspirations is brushed aside as “sentimentality” or as lacking “realpolitik” (p. 44). Contrariwise India’s arguments on normalization of ties before any final settlement are taken at face value. “India sees normalization as a means of addressing disputes”, he finds Pakistan’s insistence that “normalization would be the end result, rather than the means, of resolving disputes” as “Pakistani establishment’s way of ensuring that India and Pakistan remain apart” (pp. 60-61). Ironically however, on Kashmir both India and Pakistan exude equal intransigence. Their competing nationalisms have framed Kashmir as an inextricable part of their nationhood, which renders any rational discussion on Kashmir difficult. New Delhi’s refusal to engage with pro self-determination parties in Kashmir beyond its constitutional framework or to even consider such parties as legitimate stakeholders renders any rhetoric on normalization as rank disingenuous. It’s obduracy on Kashmir as an integral part or failure to even recognise Pakistan’s locus standi on Kashmir, reinforces the belief that Kashmir brings out uniformity; uniformity in intransigent political behaviour, be it a stable democratic state or a military controlled state.

Much of the blame on the unresolvability of the dispute is put squarely on Pakistan which “has erred in adopting a zero-sum approach on Kashmir” (p. 45) and “which has consistently allowed sentimentality to trump strategic thinking” (p.44). The armed uprising against Indian rule is misrepresented as “instigated armed insurrection” (p.46) thus denying any political agency or autonomy to Kashmiris outside Pakistani machinations. Such arguments as are repeatedly flung at Kashmiris by the Indian state makes them appear as no more than impressionable and manipulatable minds. It is no secret that Pakistan supports the movement in Kashmir, to assert however, that it is an instigated movement is being naïve to say the least. Such assertions make him indistinguishable from Indian political elites who fervently deny any indigeneity to the self-determination movement in Kashmir.

On the issue of nuclear weapons and terrorism one cannot but agree with the author. Nuclear weapons have neither removed the threat of war from the subcontinent nor have they “made Pakistan more secure” (p. 102). In Kargil war, both states share an unflattering distinction of being the only nuclear armed nations to engage into direct armed confrontation. Though timely American intervention precluded any potential escalation into a nuclear war, Kargil did indeed break “new ground in the conceptualization of nuclear deterrence” (p. 87). It also refuted the prevalent wisdom encapsulated in the nuclear deterrence theory that nuclear weapons states are rational actors and such weapons eliminate the possibilities of direct conflicts. The inability to clearly define what or how much is a minimum credible deterrent, has led to a nuclear weapons race. Arms race has worked more to the detriment of Pakistan than India, as Husain puts it aptly “seeking security against a much larger neighbour is a rational objective but seeking parity with it constantly is not” (p.151). Such mindless competition has produced a situation where the only sphere in which Pakistan is actively competing with India is,”only in manufacturing nuclear weapons and their delivery systems” (p.157).

Terrorism adds a different dimension to the already labyrinthine relationship between the two states. It not only works up visceral hatred against Pakistan upbraided for incubating terrorism on its soil, but also foregrounding the security of nuclear weapons in the subcontinent. Many of the religious militants cultivated by military and intelligence combine as strategic assets to be deployed against India and Afghanistan has had a devastating blowback. Not only has terrorist violence in India emanating from Pakistan further exacerbated the relations and subjected Pakistan to worldwide scorn but many extremists turned inwards pushing Pakistan into an interminable cycle of sectarian and ethnic violence. Husain makes the point with brevity, “ideologically motivated Jihadi militancy is not a tap that can be turned on or off by the government at will” (p.120). The only place where he makes some uncritical assertions in his discussion on terrorism is again on Kashmir where he fails to distinguish between a Jihadi violence and nationalist violence. Discrediting an entire gamut of Kashmiri resistance as Jihad whether armed or unarmed (p. 114), elides the oppressive political context which pushes Kashmiris towards militancy and lends howsoever implicitly legitimacy to repressive regime in Kashmir.

The fifth and the last chapter of the book, titled evocatively as “The Space for Friendship is Shrinking”, deals with the retrograde turn of events in the Indian politics with potentially deleterious ramifications for Indo-Pak relationship. The steady communalisation of Indian body-politic since the resounding electoral success of BJP, renders differences between a professedly secular Indian state and a “semi-theocratic Pakistani state” increasingly paler. Regressive changes in Indian polity can only buttress their extremist counterparts in Pakistan and work “to the detriment of the argument within Pakistan for a pluralist Pakistan” (p.148). The resulting competitive communal nationalisms “have eroded the commonalities between the two people” (p.150).

This book is not an academic text and as such one finds neither tedious prose nor a rigorous exposition of how and why questions. This book which deals with a range of complex issues between India and Pakistan is meant for a mass audience. And with its lucidity and smaller size, conveys the message clearly and forcefully. “Once Indians and Pakistanis start dealing more with each other their similarities could re-emerge and the contrived animosities could begin to diminish” (pp.155-56).