Re-imaging of the Asian Century: The Asian Quad Can Be A Catalyst? 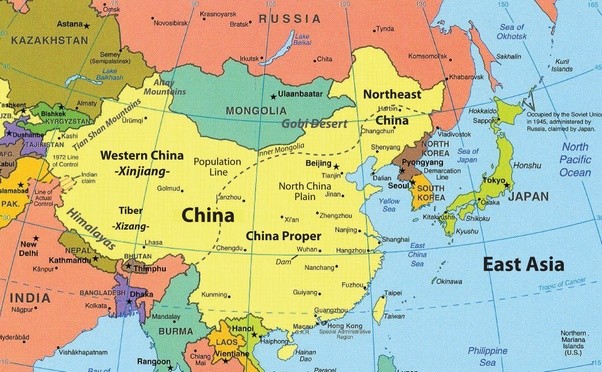 The 21st century is being projected as the Asian Century. The regional economy is going to decide the potential of the 21st century as ‘Asian Century’. Historically, these countries hada substantive share in the world economy. However, with the colonization and industrial development of the western world, the Asian economies had reached to its nadir. With the revived Asian economy, it is anticipated that 21st century would turn into the Asian Century, despite facing some inhibitive factors. Without China, Japan, India and South Korea ’s cooperation and coordination, the Asian Century would likely to remain as a pious wish and dream. For the realization of the same, these four countries have to iron out the bilateral and regional irritants to put the regional relations/cooperation on the even keel, have to divert funds for the developmental projects by pacifying the turbulent borders and, to come on one platform. The main argument is that the cordial relations among the ‘Asian Quad’ countries would  catalyse the realization of Asian Century.

After the end of the Cold War era, the Asian region has become the most dynamic part of the world. All the major powers have been making efforts to engage the Asian countries through the various platforms. The world has witnessed the 19th century as British Century and the 20th Century as the American century given their important strategic role in global politics, international relations, global governance, global economy etc. Currently, the 21st century is being projected as the Asian Century given its strengths in terms of the potential of the economy and demographic dividend (sharing 4.5 billion- 60 % of the world population) covering about 49 countries.

The Concept and Dream of the 21st Century

The concept of the 21st century had been visualized by Karl Haushofer (1924), when  he used the term “Pacific Age,” in the backdrop of economic growth of Japan, China, and India at that point of time. Weigert (1942) has quoted Haushofer as, “A giant space is expanding.. await the dawn of the Pacific age.” In the 1980s the “Pacific Age” term had become the part and parcel of the global political lexicon as the “Asian Century”. It had emerged from the meeting (1988) of Chinese leader Deng Xiaoping and Former PM Rajiv Gandhi. In respect of the emergence of the Asian century, what Deng anticipated, was represented by his quote (Sunramaniam, 2016: 5-6) as, “In recent years,’ people have been saying that the next century will be the century of Asia and the Pacific as if that were sure to be the case. ….No genuine Asia-Pacific century or Asian Century can come until China, India and other neighboring countries are developed.” However, along with the suspicion, he had also envisioned the Asian Century, provided the development of the neighboring countries would take place.

China has emerged as the economic giant of the Asian region given its transformation from the centrally-planned closed economy to a manufacturing and exporting hub (1978). Since then, it has been experiencing higher GDP rate (averaging at 10% annually), however, with the slight fluctuations in the recent years. Currently, the Chinese economy stood at US$ 10 trillion.  The same performances have been followed by countries like Japan ($4.846 trillion), India ($2.45 trillion) and South Korea ($1.308 trillion).

Scholars like Kew and Stredwick (2016) have given some historical analyses of the economic performances of these Asian countries versus the European countries and the US. The economic performance of India and China had been remained at the pinnacle during the mid of 15th century. These countries had contributed a lion share to the world economy i.e., 33% and 26 % respectively, which was continued until 1820. Contrastingly, Western Europe and the US had only a paltry share i.e., 24% and 2% respectively during the same period. Given the colonial liberalized policies, these Asian countries have been stuck in a cyclical pattern of poverty and consequently,  the contribution of India and China had become negligible in the world GDP (3% and 5% respectively) as compared to Western Europe (26 %) and the US and Canada (25%) respectively.

The Japanese economy has been characterized as miracle during 1945-1991. It has  been divided into the four stages- the recovery (1946-1954), the high increase (1955-1972), the steady increase (1972-1992), and the low increase (1992-2017). Kim and Lim (2007:71-82) had argued that South Korea was one of the poorest countries in the world given the Korean Wars. Its GDP per capita was at the lowest ebb ($79), even lower than that of some the sub-Saharan countries. However, with the introduction of LPG, its economy has undergone dramatic transformations, making it the developed and high-income country. Lee Jong-Wha has argued that the spectacular rise of the South Korean economy could attribute to its sound institutions, prudent fiscal and monetary management and strong human capital. As per the observation of the British economist Jim O’Neill, South Korea has been identified as one of the potential Next Eleven (NE) countries, that are likely to dominate the global economy in the mid of the 21st century.

As per the estimation of  the leading British economic historian Angus Maddison (6 December 1926 – 24 April 2010), India and China together had accounted for more than half of world GDP till 1700. In the 21st century, the serious efforts have been made to lift the hundreds of millions of people out of extreme and dire poverty in the post-colonial period. Currently, with the introduction of new technology, globalization, and market-oriented reform, the economic transformation has been taking place in Asia. If so, then why the Asian countries including China and India have been stuck in the poverty trap.  For this sorry state of the economy and substantial decline of share in the global economy, scholars have noted that the European colonialism in Asia and the rapid industrialization of Europe and the US could have been held responsible for the same. Against this background, Asia has been housing the two-thirds poor of the world. Its 800 million people are surviving on $1.25 a day,  and 1.7 billion managing their lives with less than $2 a day. The  rising inequality is one of the major challenges of the region. The region has still been characterized by poverty, social exclusions, rampant corruption, starvation deaths, illiteracy, inequality, deprivation of health and educational facilities, homeless, human rights violations, lack of transparency and good governance, red-tapism, nepotism, gender disparity and discrimination, stunted children, anaemic expectant mothers, high child mortality rate, polluted environment, lack of clean drinking water, rural-urban developmental gap etc.

For achieving economic growth and progress; the peace, stability, and security are used to be considered as pre-conditions. The proposed ‘Asian Quad’ if be formalized, would be helpful in securing regional stability and security and resultantly it would be helpful in achieving a strong economy and economic relations/cooperation, turning the poor region into a prosperous and powerful region. These Asian countries have been sharing many commonalities like ancient civilizations, colonial past, current challenges, and future potentials. In the background  of these commonalities, the ‘Asian Quad’ can be concretized.

What kind of course of actions and direction to realize the Asian Century to be followed by the the proposed member countries of the ‘Asian Quad’? Since 1962, China and India’s relations have remained more or less hostile until 1988. Even today, the bilateral relations are being affected by the bilateral irritants like border dispute, Tibet and Dalai Lama, strategic support to Pakistan, South China Sea Dispute, terrorism, a string of pearls, OBOR, CPEC, regional geopolitics etc. Over Doklam standoff, the army of both the countries had been stood eyeball to eyeball. Recently, some important formal and informal meetings between the two countries had taken place, putting the bilateral relations on the even keel. Both countries are making efforts to do course of correction of their foreign policies towards each other.  Countries like Japan and South Korea are also the lynchpins of India’s Act East Policy. India has been sharing good terms with these countries in a various regional mechanism like ASEAN, ARF, EAM, Indo-Pacific Quad,  2+2 mechanisms etc.

As far as the relations among the three countries China, Korea, and Japan are concerned, it is believed that the same has been hanged in the balance even till the beginning of the 21st century given the legacies of 19th and 20th centuries- distrust, mistrust, and resentments. However, currently these countries are trying to put their relations on the even keel through the Trilateral Summit. It was proposed and concretized in 2004 and 2008 respectively. In the first annual summit (December 2008, Fukuoka-Japan), the multilateral cooperation in terms of political and strategic; economic cooperation and disaster relief were discussed. Till now (May 2018), the eight meetings had been organized and remained successful in achieving the regional cooperation and to calm down the regional irritants. PM Abe and Premier Li have agreed to avoid clashes in the East China Sea and to committed to identify the projects for potential cooperation related to OBOR. On the other hand, the ties between Japan and South Korea are also improving. The South Korean President Moon of the strong opinion that there is a need to “institutionalize” the regional cooperation among these East Asian countries. The difference over the Korean peninsula nuclearization and the US factor in the regional dynamics have somewhat proved as retardant for the regional cooperation. Therefore, the US would remain a critical factor in determining the regional stability.

Now the question is how Quad can catalyze the Asian Century? The ‘Asian Quad’ would remain a key to open the lock and catalyse the prospect of the Asian Century. Through the platform of ‘Asian Quad’, these countries needed to redouble their efforts to bring all the Asian countries on board and make the Asian Union (exclusively for Asia). From, this platform, these countries need to redouble their efforts to enhance economic cooperation, make the regional economy stronger, bring the inclusive opportunities in terms of education, health, employment and research and development etc.

Can Asian Century be in the Offing?

Currently, when these Asian countries have been stuck in poverty, facing the faltering economies, being pestered by the bilateral and regional irritants, how Asian Century can be realized? However, on the other hand, there is a positive side also like improving the bilateral and regional relations. In the backdrop of  GDP  projections (Price Waterhouse Coopers), the dramatic economic  transformation of Asia is believed to take place until 2050. It is being  anticipated that both India and China would regain their lost economic glory and dominance. The first place is likely to be retained by the Chinese economy ($61 trillion), followed by India and the US reaching to $42 trillion and $41 trillion respectively, followed by Indonesia (4th), Brazil (5th) Russia (8th). In these projections, Japan has also given very important place in the top 10 economies.  Cox (2015) has echoed with the PwC’s projections and anticipated that the economic dominance of China and the United States might be replaced by historical hegemon China and India.

In this background, the ‘Asian Quad’, if formalized, would likely to catalyze to turn the 21st century into Asian Century. The major Asian economies would find place in the top 10 economies. These countries have been experiencing advancement in science and technology, have global level MNCs, expanding basic infrastructures like rail, road, ports, oil and gas pipeline, poverty reduction etc. The regional political and economic cooperation through the mechanism of the ‘Asian Quad’ would likely to further strengthen the peace, prosperity,  stability and security and turn the 21st century into the Asian Century.