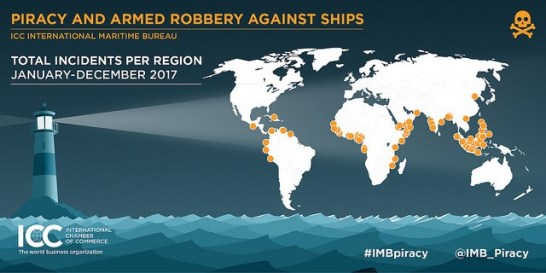 Maritime piracy is a significant threat to safe navigation of the seas.  Due to the rise of Somali piracy, different states entered collaborative defense pacts to mitigate the threat.  Among these inter-governmental coalitions are those of the European Union Naval Force, Operation Ocean Shield, Combined Task Forces 150 and 151 which significantly reduced the threat of Piracy. The strain on governmental resources to provide safety to vessels at sea created a demand for private maritime security services. While these services are used rampantly, they have become problematic on several grounds: these companies are not an effective deterrence mechanism for piracy, there is a lack of comprehensive international legal framework to regulate the industry, and it creates a consequential culture of impunity at sea.

Privateering or the utilization of mercenaries was occurring since the middle ages. In the 13th century England, privateers were employed by the government through a letter of the marquee to attack rival commercial vessels of other nation countries. (Burkov and Wärff, 2012) According to the Red Cross organization, ‘the demand for Private Military and Security Companies (PMSC) has increased since the Second World War’. At the height of modern piracy in 2008-2011, state capacity to deal with vessel protection at sea was limited and private companies emerged offering a wide range of security services. Impending impunity at sea increased the demand for such services. The role of PMSC today has been a controversial one and it is debated whether private security firms or state-sponsored security patrolling high seas is the best way forward.

Private security companies are confined to a role of disrupting piracy but not effectively deterring it as a crime. Further, they may be operating at the cost of serious violations of human rights (shooting suspected pirates on sight and fleeing the incident) contributing to more impunity at sea.  In the  Enrica Lexie incident two Italian Marines on board the MV Enrica Lexie, an Italian flagged oil tanker sailing from Sri Lanka towards Djibouti had killed two innocent Indian fishermen approximately 20.5 nautical miles off Kerala in India’s Exclusive Economic Zone (EEZ) resulting in conflicting jurisdictional claims and diplomatic complications. Professor Douglas Guilfoyle (2012) writing to ejiltalk series opine that ‘states have a duty of due diligence to take measures to minimize the risks to foreign nationals and States of dangerous circumstances or activities within their jurisdiction’ He further concludes licensing armed guards to use force in self-defense or defense of others does not constitute connivance in unlawful uses of force but turning a blind eye to potentially wrongful killings through a failure to investigate or issuing rules on the use of force by PMSC is a connivance.

Private security companies remain unregulated in an international level while only domestic measures can effectively regulate their operations locally. The deficiency in a number of state navies patrolling seas is what caused a demand for privately contracted firms. Such firms according to Burkov, could play an effective role in the future if regulated. (Burkov and Wärff, 2012) Burkov argues while the use of mercenaries is prohibited there is a legal definition in Additional Protocol I of the Geneva Convention, Article 47 (2) which defines it. Private Security Service providers might be consistent with some of the specifications Article 47 (2) but there is no accepted definition for private security companies and so they continue business activities through legal loopholes. However the Montreux Document and UN Draft Convention on military forces and Security Companies have set standards on regulating their activities in which case, dualist states are required to adopt appropriate national legislature sufficient enough to regulate the industry domestically.

Oceans Beyond Piracy in a report (2017) opines ‘in response to violence and criminality in the maritime sector, the shipping industry has relied on several models of contracted maritime security to protect vessels and seafarers which has resulted in a proliferation of weapons at sea’ The report identifies vessel protection detachments, state-affiliated escorts and Coastal State Embarked personnel as some of these contracted models. A study on vessel protection detachments (VPD) by  (Van Hepson, 2014) points out 11 European flag states authorize privately contracted armed security personnel (PCASP). A legal framework exists in the Middle East and Africa for PCASP. India and Japan strictly prohibit armed guards on board except for China. Djibouti and Sri Lanka explicitly allow private maritime security companies to rent government-owned weapons while only Israel, Spain, USA, Australia allows arms and ammunition to disembark in ports while a few countries permit entry to territorial sea under strict conditions.

Oceans Beyond piracy is concerned with transparency in maritime security organizations in a manner that does not increase violence at sea through a globally accepted legal framework. In its briefing paper it identifies “VPD unlike private security actors at sea are trained to follow strict and defined rules of engagement through traditional military chain of command” (Oceans Beyond Piracy, 2017) VPD employment has been of immense value to EUNAFVOR, Operation Atlanta protection mission of World Food Program deliveries allowing EUNAVFOR state warships to continue other counter-piracy missions. (safety4sea, 2017) Hence, VPD seems a plausible option towards securing vessels at sea. However the possibility for VPD to fit into a piracy prosecution model is flawed since they might be inconsistent with the UNCLOS Article 107 which stipulates ‘a seizure on account of piracy may be carried out only by warships or military aircraft, or other ships or aircraft clearly marked and identifiable as being on government service and authorized to that effect’ In such a case VPDs should be granted state affiliation with the possibility of running for profit.

This may seem a controversial idea but today it has been necessitated for governments to seek alternatives to privatized security services, by developing a governmental model that runs for profit to make the operation financially viable. The other concern the model should address is being authorized to the effect of being able to conduct arrests and seizure and render criminals operating at sea to lawful governmental authorities. This may seem a very difficult task but not impossible or inoperable, and it remains an issue requiring further research and analysis on economic implications on the shipping industry, the military praxes, and contested legalities.

Burkov, Y. and Wärff, F. (2012). Possibilities of application of private security organizations off the coast of Somalia under national and international regulation. PhD. Örebro Univetsitet Academy of Law.

Dubner, B. and Henn, J. (2011). On selecting a judicial system(s) To try sea pirates- An interesting/necessary exercise but is it enough to deter the attacks/hijackings. Journal of Maritime Law and Commerce, 42(4), p.569.