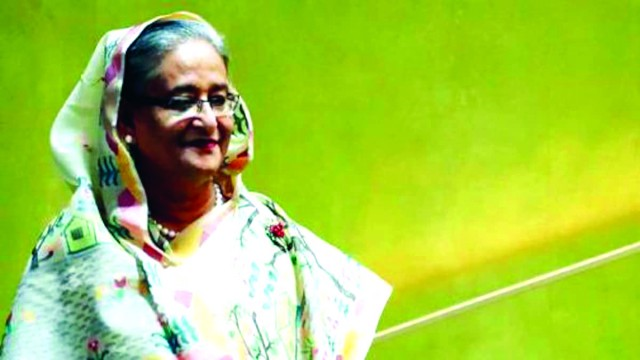 Just when I thought I had witnessed the ultimate in political hypocrisy at the end of Donald Trump’s historic and depressing impeachment trial, Sheikh Hasina – the prime minister of Bangladesh – has restored my faith that South Asian politicians can match any politician anywhere on the hypocrisy chart. And surely, on this hypocrisy chart, the list of politicians around the world who would rank in the same category as Sheikh Hasina and the Republican Senators who voted to acquit Mr Trump would be long enough to encircle the globe.

It was in the Bangladesh Chronicle, a publication based in the United States, in an article taken from the Bangladesh newspaper, The Daily Star, that I saw the article in which Sheikh Hasina is quoted as saying, “[F]or a democracy, a strong opposition party is a must as we want our democratic trend to continue.” She went on to say, according to the article, “The present opposition parties in Parliament could not attain the confidence and trust of the people at the desired level due to lack of leadership.”

Well, if that is all she said, it is as rich in disingenuity as the statements made after the Trump trial by gaggle of Republican Senators in the US who voted to acquit him. These Senators explained their vote as sort of a technicality. None of them tried to argue that Trump was innocent of the charge levelled against him—that he planned and incited the January 6 mob attack on the US capitol in an attempt to overturn the already certified results of the election he had lost to Joe Biden by seven million votes. Instead, they argued that their vote to acquit was because the trial was unconstitutional. Whether such a trial would be unconstitutional is a complicated legal question that only the courts could decide (constitutional lawyers are about evenly split on the question), but the Supreme Court would be unlikely to take the case as it would probably defer to the legislative branch on an issue that has no precedent and on which arguments on either side of the issue have equal merit. It is a political question, and the Senate made the political decision to go ahead with the trial.

As to Sheikh Hasina’s actions regarding a democracy needing a viable opposition, they speak for themselves. Clearly, as prime minister of the incumbent government, she was ultimately responsible for the 2018 stolen election in which the legitimate opposition was effectively barred from voting by violence, threats of violence, disappearances and imprisonments and overt ballot box stuffing. The effect was that this crooked election gave her party over 290 seats out of 300, that is, 96 percent. As I remember, only a half dozen or so of the “opposition,” was elected, an outcome so unbelievable that every observer and human rights organization labelled the election “stolen.”

But Sheikh Hasina has a record over the last two decades of slowly but surely building a one-party system that is now so firmly locked in that she can talk of having an opposition because now she doesn’t have to deal with one at all. Perhaps she is thinking of creating what I would call a “Potemkin Village” opposition, one which looks like an opposition but over which she has control. I note in her statement above, she insists the Bangladesh is on a democratic trend; of course, the opposite is true. This subterfuge is in not unknown in the authoritarian world and gives the county’s government something to point to when criticized as authoritarian.

The Awami League and Sheikh Hasina are responsible for the failure of democracy in Bangladesh, but opposing party bears some responsibility also as its belief in, and understanding of, democracy and a two-party system was often incomplete and self-serving. Every election was akin to a war that could not be lost. After that failure, an interregnum a military/civilian regime ruled in 2007-2009 and conducted a free and fair election that Sheikh Hasina’s Awami League won. She has been in control ever since and began her campaign to get rid of any opposition soon after by removing the constitutional plank that required a neutral interim government to oversee the election. The march to authoritarianism has accelerated with every election. She had her Potemkin Village after the 2014 election, using a couple of ministerial seats and the economic rents that go with them to lure the former dictator Ershad’s party into that role. The bold power grab of the 2018 election brought Bangladesh to the Orwellian nightmare of the totalitarian grip on the country that one-party rule permits and it now keeps any opposition in fear of its life. If Sheikh Hasina now needs the cover of a Potemkin Village opposition, does that mean that even the Orwellian nightmare is not enough?

Americans have just lived through what I believe will be declared by historians to be the ugliest and most threatening attack on the country’s imperfect, struggling, already-challenged democracy since the country’s founding 232 years ago. It was clearly a coup d’état attempt, however disorganized it looked on TV. The question is whether it is just the beginning of a mid-life crisis of America’s democracy that will end in authoritarianism, or the end of the crisis and the beginning of a climb back out of the dangers of authoritarianism. Some writers who consider themselves in the liberal democracy camp believe that authoritarianism is all but inevitable. I wrote two weeks ago about the Trumpian plot to subvert American democracy and the attack on the Capitol and the Congress meeting inside it. It was haphazard and badly implemented, but clearly planned and used his more rabid supporters as his shock troops. Almost the entire Republican Party is also implicated by its enabling silence on his public campaign to reject the election results. In part the coup failed because Trump was such a poor student of politics and totally adverse, it would seem, to organized thinking or serious planning. In part it failed because the American institutions which the writers of our constitution put into the Constitution just to stop someone like Trump remained unbowed, despite the pressure he put on them in his own ad hoc way. But once he was defeated in the November election, the January 6 attack was almost inevitable. Alexander Hamilton, one of the most talented of the writers of the Constitution predicted, “[H]istory will teach us…that of those men who have overturned the liberties of republics, the greatest number have begun their career by paying an obsequious court to the people; commencing demagogues and ending tyrants.” We were fortunate that a politician with the skills of a Sheikh Hasina was not running that show.

The attack on the capitol led to the impeachment of then-President Trump by the House of Representatives just before he left office and his trial by the Senate three weeks after he left office. (It is the fact that the Senate trial was held after he left office that 43 Republican Senators leaned on as their excuse for voting to acquit him.) At the end of the Senate trial, Trump was found not guilty of the charge of planning and inciting an insurrection. Although 57 of 100 Senators voted to convict, the Constitution requires a 2/3 majority, or 67, to convict.

The evidence against Trump was strong and skillfully presented by the House team of prosecutors, and he was very ineptly defended by a team of lawyers that actually drew laughs at times for their incompetence. The penalty, if he had been found guilty, is a ban of his ever running for political office again. With this acquittal, that threat remains and gives him the leverage he needs to remain in control of the Republican Party. It is not clear he actually intends to run. However, there is an ironic danger that still actually lurks in the constitution which could spoil this option. It is the 14th Amendment, adopted in 1868, another result of the civil war, which makes anyone born or naturalized in the US a citizen of the US and gives them the right to vote; Section 3 says that anyone who has engaged in or supported insurrection against the US may not hold any Federal office. This is the amendment Trump wanted to change because he and the anti-immigration supporters do not believe that people born in the US should have the automatic right of citizenship. Some members of Congress are considering whether and how to use this.

I want to be clear that I intended this article to be a follow-on to my most recent article about the current nature of the Republican Party in the US. That article argued that US democracy, and by extension other democracies, are endangered when one party in a two-party system does not truly support democracy as the system of government. And when the guardrails of democracy don’t work, or are absent, as in the case of Bangladesh, the path to authoritarianism is clear to an authoritarian leader such as Sheikh Hasina, and it is temptingly straight and well paved even to those who are not necessarily drawn to that ideology.

The article was published in the Friday Times