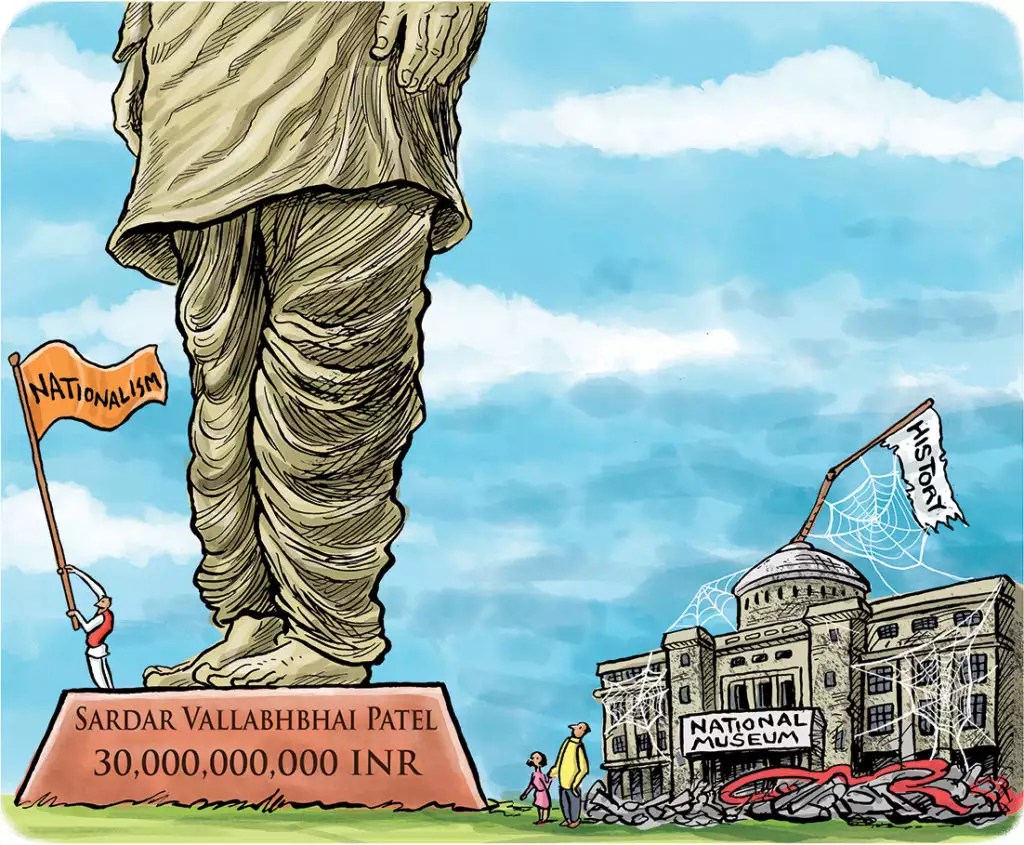 In Making India Great: The Promise of a Reluctant Global Power, Aparna Pandey writes that ‘India has yet to find the balance between philosophical debates and conversation on practical matters. Getting carried away by emotions about other people’s beliefs or views on history often comes in the way of determining a course of action in the present moment.’  Religion and cultural beliefs and disputes have hampered and could end up reversing India’s success, describes Pandey. This analogy can be extended to several South Asian nations including Sri Lanka. It seems some of Sri Lanka sees itself as tied up in a time capsule of ancient glories from our glorious civilizations and religious conservatism. The shrill Sri Lankan overplay of ethno-religious sentiment and India’s focus on Hindutva are clear examples.

V.S.Naipaul describes the copious amount of missed opportunities as a crisis of a ‘wounded old civilization’ due to shackles of this very entrapment. To let go of such baggage first and foremost requires recognition and embracing of diversity. Policies and constitutional reform should secure this essence to propel economic and social progress. While these nations are bogged down in their domestic constraints, they miss the economic reform opportunities, such as the 15 years delay of economic liberalization missed by India compared to China in 1978. This was accurately captured by the current Indian  Minister of External Affairs  Subrahmanyam Jaishankar in his new book The India Way in which he writes ‘the delayed economic reforms were undertaken a decade and a half after those of China. And far more ambivalently. The fifteen-year gap in capabilities continues to put India at a great disadvantage.’

Jaishankar further explains, ‘actual policy in a large country is a parallel pursuit of multiple priorities, some of whom could be contradictory. Neither abstention nor hedging are always answering to their pulls and pressures. Choices had to be made, not just debated. And they cannot be without a cost’. India’s choices on Sri Lanka has gone through rough terrain, the cost for some of these choices lingers as a reminiscence directly touching the relationship, challenging the present political leadership.

Jaishankar understands the complexity of the Sri Lankan political dynamics as he had firsthand experience serving as First Secretary and political advisor for Indian Peacekeeping Force(IPKF) at the Indian High Commission in Colombo. This was during the turbulent 1988 -1990 youth insurrection that killed thousands of people on the island. It was a twofold battleground in Sri Lanka. The Tamil Tigers on the one hand and crushing the youth insurrection at the same time. Following Indian Prime Minister Rajiv Gandhi’s visit to Sri Lanka to ink the Indo-Lanka accord in 1987 with President J.R.Jayawardena, the 13th  amendment was introduced to create provincial councils as a follow-up action. The 13th amendment to the constitution is designed to devolve power. It was supported by the ruling UNP and opposed by most of the opposition parties except for Sri Lanka Mahajana Party (SLMP) founded by Vijaya Kumaratunga the famous politician assassinated in 1988 for his position on devolution. The devolution of power has been discussed by subsequent leaders for 33 years with multiple promises such as ‘13 plus’ during the Presidential tenure of Mahinda Rajapaksa. In the present government of Gotabaya Rajapaksa, the Minister in charge of provincial councils, Rear Admiral Sarath Weerasekera, in a recent interview explained: ‘I am personally not in favour for provincial councils nor devolution of power’ but would function as the Minister of the provincial council. The government with its unitary essence as the political ethos and the ultra-nationalist position could take a different turn at the constitution-making process on devolution of power which will be a turning point in Sri Lankan political history.

Within a month after appointing the new cabinet of Ministers, President Gotabaya Rajapaksa with two-thirds of power in Parliament approved a major constitutional amendment on 2 September. The 20th amendment was to reverse the power from the legislature back to the executive from the previously passed 19thamendment, while the former President Sirisena who curtailed his power from the 19thamendment five years ago was elected to the legislature as a member of parliament joining the Rajapaksa regime. Shifting power back and forth is a dangerous exercise. President Gotabaya’s move is seen as a promise to make swift and efficient decisions by the executive. It could turn into a nightmare if it falls in the wrong hands. Such was the case in Pakistan under General Muhammad Zia-ul-Haq who in introducing the 8th amendment to the constitution shifted the balance of power towards the executive which plunged the entire nation into an abyss of autocratic rule. While Gotabaya is projected by the majority of the country as a benevolent President promising the much-required reform to modernize and introducing a new political culture, it is also important to comprehend the consequences of this amendment beyond his tenure in the long term as such constitutional reforms have broken many nations, especially in South Asia.

A stronger executive branch would be able to operate rapidly and efficiently. It would however have a very low degree of accountability without checks and balances. Former President Sirisena regime’s installment of more checks and balances limiting the executive power resulted in creating commissions with strong bureaucratic veto power. This was seen inefficient and less result oriented with excessive constraints on decision making. Too many checks and balances will create a ‘Vetocracy’, as explained by Francis Fukuyama. It also helps one political party dominating the parliament to moderate the will of the majority and force it to pay greater attention to minorities. Sri Lanka would need to find an equilibrium between strong checks and balances and a strong executive.

The 20th amendment to the Sri Lankan constitution comes from the backdrop of a culmination of recent events that took place threatening national security. The weakening of the executive was seen as an impediment for national security to exercise useful reforms in the previous Sirisena-Wickremasinghe government. The restoration of power to the executive will supplement the existing debate in several quarters of the West which questions democracy under the Rajapaksa regime. As every solution brings more challenges, the Rajapaksa sibling regime would need to navigate its political journey projecting its democratic values in the narrow space constructed from the constitutional change by themselves.

China’s territorial expansion is viewed as the modern-day equivalent of the East India Company by David R. Stilwell, the assistant secretary of state for the Bureau of East Asian and Pacific Affairs of the USA. The development of a distant geographical space in the South China Sea is directly affecting Sri Lanka. US Secretary of State Mike Pompeo said: ‘The Chinese government cannot be allowed to use the China Communications Construction Company(CCCC) or other state-owned businesses as weapons to impose an expansionist agenda. The United States will act until we see Beijing discontinue its coercive behaviour in the South China Sea, and we will continue to stand with allies and partners in resisting this destabilizing activity”. The CCCC, developing the Sri Lankan Port city project which reclaimed the oceanfront altering the Colombo city coastal geography, and several other Chinese companies were targeted by US sanctions. This would further weaken the US-China relations and will impact projects under China’s BRI.

Colombo Port City developers market this venture as a global project built to attract international firms who will lease out most of the developed space. The brewing cold war between the US and China would hurt many economies and could interfere with domestic policymaking in the coming years. In a similar development, Japan has expanded a subsidy program that helps Japanese companies move out of China. Japan’s diversifying supply chain program acknowledged India and Bangladesh as eligible destinations for companies leaving China. Assessed as a move targeting China, at recent U.S.-India Strategic Partnership Forum, Prime Minister Narendra Modi said that the pandemic has “shown the world that the decision on developing global supply chains should be based not only on costs. They should also be based on trust”. In East Asia, China is pushed out from the KRA canal project in Thailand, another geographical alteration seen as an answer to the Malacca dilemma. The US sanctions, Japanese supply chain adjustments to the scrapping of the KRA canal would push China to look for alternatives and readjustments of its strategy to secure its interest in a more assertive manner.

Assertiveness and further US-China decoupling will see many nations, including Sri Lanka, paying a hefty price. While nations are busy readjusting their domestic power balance and glorifying inward-looking values, they could miss the opportunity to grow, modernize, reform and embracing the liberal democratic values.

*Asanga Abeyagoonasekera is geopolitics and foreign policy analyst. The views expressed here are his own. The article was initially published by Observer Research Foundation(ORF) New Delhi and is available at https://www.orfonline.org/expert-speak/perils-of-power-in-wounded-old-civilizations/