While the moderate TNA will have to do a lot of tight rope walking, the radical Tamil nationalist groups have to prove that it can do what TNA could not. And that’s going to be very hard and the consequence of failure will be total rejection in the next elections. 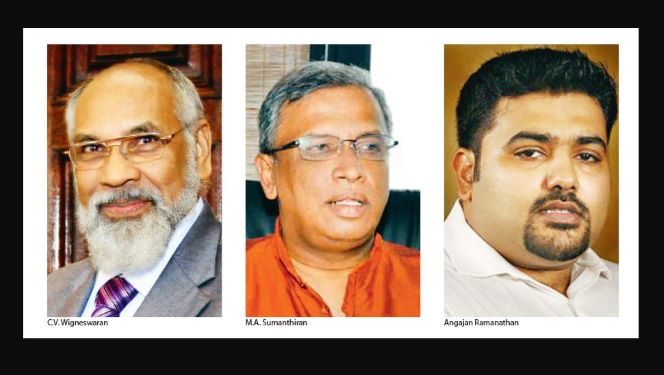 Colombo, August 9: The August 5 Sri Lankan parliamentary elections have put the Tamil parties based in the Northern and Eastern provinces at the cross roads. In contrast to the past, voters in the Sri Lankan Tamil homeland, did not support any single party but had distributed their votes among a variety of parties, each with a different stock in trade. This makes it difficult to be precise about the overall future trend, though some surmises can certainly be made.

While one section represents Tamil radicalism, another is manifestly pro-government. However, the third and the single largest section is still made of the same mould as in the past – a section which is opposed to the government but is moderate in its demands.

Wigneswaran and Ponnambalam are newcomers to parliament and are expected to voice their radical views stridently. And unlike the moderate Tamil nationalist TNAs, the duo will seek an internationally supervised referendum among the Tamils on the ethnic question and strive to drag the Lankan government to the International Criminal Court (ICC) even though Sri Lanka has not signed the Rome Statute which created the ICC.

The radicals will have to do their utmost in this regard as these demands have been their USP for long. They hope to carry on the campaign with the support of the UN Human Rights Council, the US State Department, the pro-LTTE Tamil Diaspora in the West and Australia and Tamil radicals in Tamil Nadu.

Votes wise,  G.Ponnambalam got 31,658 preferential votes and  C.V.Wigneswaran 21,554. They were able to get elected with such small numbers because of the Proportional Representation System which enables small parties to get seats. But as MPs, they enjoy equal status and opportunities to voice their demands.

Of these the strongest group, with the largest voter base is the moderately anti-government TNA, followed by the pro-government group. The radicals are the smallest.

According to Premananth Thevanayagam, former editor of  the Jaffna-based daily Uthayan, the votes that the radical and pro-government groups got were those of Tamils who were disillusioned with the TNA which had been in parliament in strength from its founding in 2001 under the auspices of the LTTE leader Prabhakaran. In the parliament elected in 2015, TNA had 16 elected MPs. This time its representation among the elected MPs has come down to nine.

Due to its strong links with the United National Party (UNP)-led Yahapalanaya government from 2015 onwards, the TNA promised that it would deliver a new federal constitution with substantial devolution of power to the Tamil-speaking Northern and Eastern Provinces. But despite its best efforts, majoritarian Sinhalese MPs, even from the UNP, backed out from their pledge at the last moment fearing a backlash from the Sinhalese majority.

Fixated on constitutional changes, the TNA’s lawyer-leaders failed to deliver on the economic development front also. Sinhalese leaders of the UNP also backed out of their promise to set up war-time accountability mechanisms leaving the TNA out in the cold.

Even as radical followers left the TNA, a section of Tamils, particularly the youth, began to see the futility of pursuing the radical political path and began to wonder if they could opt for economic development. These elements rallied around the pro-government Sivanesathurai Chandrakanthan (54, 198 preferential votes); Angajan Ramanathan (36,365); Douglas Devananda (32,146),S,. Vyalendran (22,218) and  Gunasingham Thileepan (3,226).

As Premananth Thaivanayagam put it, the youth’s option of migrating to the West has ceased to exist with the West raising barriers to prevent the spread of COVID-19. “The youth now feel that they will have to live here and make something of their lives with government support,” he said.

Knowing that a brazen association with Mahinda Rajapaksa’s Sri Lanka Podujana Peramuna (SLPP) would be considered anti-Tamil, the pro-government group, except S.Vyalendran, fought under other banners like SLFP and EPDP with the tacit understanding with the SLPP, that it would work with it in parliament and accept ministerial posts, Thevanayagam said. This group got three seats while the radicals got only two.

TNA’s controversial second leader and spokesman, M.A.Sumanthiran, admitted that the alliance had not delivered on its promises and had therefore suffered serious damage. He said that the need of the hour is to sink differences, find a common platform, and purse the Tamils political and economic goals.

However, unity is unlikely to come about because the radical group would be eager to prove that it’s tough posture will help it push the Tamils’ case hard with Diaspora and international support. The TNA is equally sure that such radicalism has no chance of succeeding in a situation when a tough militarized, China-supported, Sinhala majoritarian government is in power in Colombo both in the Executive Presidency and parliament with a two-thirds majority. Traditional supporters of the Tamil cause like India and the US are now weak with domestic problems galore.

Furthermore, although the TNA has appealed to all Tamil parties to join, it will not give up its pre-eminent position in the united group, which it feels it is entitled to. The TNA will also not entertain unity with the pro-government group as it has to play on the anti-government sentiment of the majority of Tamils. It has been succeeding so far because the majority of Tamils have seen it as the most credible and safe voice of the Tamils on the issue of ethnic rights. It cannot go over to the government side wholesale.

The TNA will have to keep playing the Tamil nationalist card with its demand for federalism and war-time rights violation accountability mechanisms and foreign involvement in solving the ethnic issue. But on the other hand, it cannot bring about a federal constitution without the support of the Sinhalese parties because, for any constitutional change, it will need two-thirds support in parliament and perhaps even popular Sinhalese support in a referendum.

While the TNA will have to do a lot of tight rope walking, the radical Tamil nationalist groups have to prove that it can do what TNA could not. And that’s going to be very hard and the consequence of failure will be total rejection in the next elections.

The safest among the three groups is the moderate pro-government group. It has the greatest chance of delivering on its promises as both President Gotabaya Rajapaksa and Prime Minister Mahinda Rajapaksa want to set develop Sri Lanka economically through a centralized administration, with developmental benefits being distributed throughout the country irrespective of ethnic, religious and regional differences.

(The featured images at the top are those of C.V.Wigneswaran, M.A.Sumanthiran and Angajan Ramanathan)