PAKISTAN’S QUEST FOR NSG MEMBERSHIP AND ROLE OF CHINA 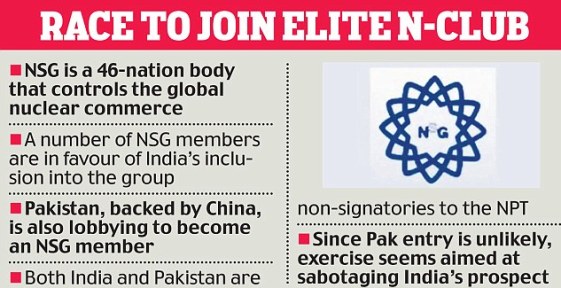 Pakistan has been trying to acquire the membership of the 48 member Nuclear Suppliers Group (NSG) for the past several years. Its quest for the NSG membership is not only limited to gain parity with India but, to meet the growing energy demands also. The international community is now looking forward to the upcoming NSG plenary meeting, expected to be held at Latvia this month. The matter of concern is that the global nuclear governance has ignored Pakistan for its membership in the NSG. Although the global nuclear governance is based on the so-called principles of equality and non-discrimination among the permanent members of the NSG China is the one who supports unbiased and criteria based approach for the membership of both Pakistan and Indian. China views that non-NPT states should be included in the NSG cartel once they became the member of the NPT because as per the rules set by the NSG any country which is a non-signatory of the NPT could not become the member of the NSG until or unless it becomes the party to NPT. Therefore India being a non-signatory to the NPT does not meet the criteria of becoming the member of the NSG. Other countries shunned India’s membership into the NSG which include New Zealand, Turkey, Ireland, South Africa, and Austria. Nations like Kazakhstan and Belarus have supported Pakistan’s bid for the NSG.

A glance at the NSG background reveals that NSG was formed in response to the first Indian nuclear explosive test in 1974, to prevent nuclear proliferation by controlling the export of materials, equipment, and technology that can be used to manufacture nuclear weapons. However, India’s nuclear test of 1974 demonstrated that nuclear technology transferred for peaceful purposes could be used to build nuclear weapons. Considering India’s previous record, one can infer that it is not eligible to enjoy the special waiver of the nuclear trade. Nonetheless, due to the international lobbying by the US, India has sufficient western supporters for its case. By hook or crook, India has been accommodated in the NSG with a special waiver. Therefore it is essential for the international community to extend equal treatment to Pakistan as that of India. It is pertinent to mention here that Pakistan has a comprehensive export control system and its national command authority is responsible for control of Pakistan’s strategic assets. If the waiver for India were generalized by criteria, Pakistan could be exempted from the full-scope safeguards requirement and be incorporated into the NSG as a nuclear supplier state.

Under the above circumstances, Pakistan would be willing to negotiate the terms of such an exception. But, the question is why the US is concerned that Pakistan should not get the membership of the NSG even if it has been following the full scope safeguards of the International Atomic Energy Agency (IAEA). International Atomic Energy Agency (IAEA) Director-General Yukiya Amano during his visit in March 2018, to Pakistan’s various civilian nuclear facilities and installations, was highly impressed by the standards which Pakistan is maintaining for nuclear safety and security. He stated that “Pakistan is an experienced user of peaceful nuclear technology; everywhere it was clear that Pakistan has the knowledge and the pool of people who are dedicated to doing this job.” Henceforth despite the IAEA full-scope safeguards why can’t Pakistan get a special wavier like India? It should also be allowed to make a nuclear trade with China which has been penned before China’s membership in the NSG in 2004.

Contrary to Pakistan’s efforts for the nuclear safeguards and security measures some nuclear experts and critics are of the view that Pakistan’s rationale for the participation in the NSG is unreasonable. The legitimacy and nuclear parity are the reasons along with the severe energy crises behind Pakistan’s aspirations for NSG membership. So, here is the answer for those who oppose Pakistan’s quest for nuclear energy, that in Pakistan summers are welcomed with a gift of 8000MW shortfall while winters embrace a current and smoggy shortfall of 7000MW. Pakistan ranks at the fourth position among the list of countries that are facing energy deficit according to a United Nations Report, 2013. So, Pakistan is confronted with an energy crisis. It is for all the genuine reasons that Pakistan needs the nuclear energy which is the cheaper solution to meet its day by day increasing energy demands.

Despite Pakistan’s continuous diplomatic efforts regarding the NSG, there is currently no consensus in the NSG about how it should approach the question of future relations with non-NPT parties. However, the NSG is required to consider the issue which has a significant impact on NSG’s future credibility and effectiveness. NSG should encourage and welcome states like Pakistan in the NSG instead of discouraging them because this will otherwise compel the states to acquire other cheaper yet hazardous means of energy such as coal which is more reasonable, however, contributes to increasing the amount of carbon footprint. Moreover, this will disturb the world peace and South Asian strategic stability. Therefore China being the crucial global player and a close neighbor to both Pakistan and India should further promote this criterion based and nondiscriminatory approach in the global nuclear governance.