Pakistan and NSG: Countering the Cards 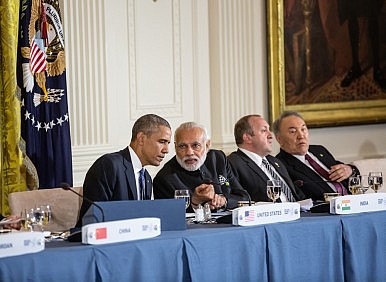 Notwithstanding proactive lobbying, assertive US backing and overwhelming support for India’s bid for the membership, India is still struggling hard for the Nuclear Supplier Group (NSG) membership while the plenary meeting of NSG also concluded with a sharp setback for India. The chances for a favorable outcome were already bleak for India’s inclusion, but two quick progressions dropped the vociferous voices. First, China opposed India’s membership in defense of the principles that does not allow a non-NPT state to be part of NSG club. Second, Pakistan formally applied for club’s membership. Albeit floor was for India with prominent positive interventions, yet the absence of consensus –  with New Zealand, Ireland and Austria supported for merits of NPT, Turkey and China flagged Pakistan’s right to membership and Brazil’s stance for a criterion-based process- led to a showdown of India’s induct as a member.

Evidently, two players are exchanging strong messages to drive respective pressure points, China as ‘non-proliferation hardliner’ and US as ‘strategic supporter.’ The prudent positions by both states are niche aligned to their geostrategic interests yet playing a subtle and significant role in determining which way the vote will sway. Notwithstanding Indian diplomatic efforts and US pressure, China did not fall for any influence and is still stick to its official stance which in result stonewalled Indian efforts and supported Pakistan’s candidature.  Pakistan sees this Chinese treatment as a testament of all-weather friendship and close ally.

The China’s criteria based approach advocates for same treatment of all non-NPT states. This called the 48 members of the group to reach consensus on what the ‘criteria’ should be.  It would mean that neither India nor Pakistan could gain entry till the NSG draw up its criteria. Consequently, this was a smartly delayed tactic by China aimed at New Delhi. Conversely, India opposed any criteria-based approach and asked for a merit-based approach. By ‘merit’ India probably desires to look at the previous record of a country and their nuclear non-proliferation credentials, which could benefit India and trouble Pakistan. However, India’s application does not guarantee merit, since it was India whose 1974 nuclear test led to the creation of the NSG. The fundamental purpose of the NSG is to provide a mechanism through which the non-proliferation goal could be achieved, but in the present scenario, the group members are unanimously supporting a proliferator (India) to be part of the group. This questions India’s non-proliferation credentials and merit-based approach. This requires consensus on the measures to evaluate ‘merit.’

If India succeeds in joining the NSG club, it will give India greater excess to nuclear commerce, the legitimacy of the nuclear armed state outside NPT and equivalent status to other members of NSG. However, criteria-based consensus is important to address the differences because treating India as an exemption would set the precedent for future membership.

Pakistan is not ready to accept any assurance that India would refrain from blocking Pakistan’s subsequent bid. It believes that criteria-based approach will preserve its prospects for NSG membership. The basic criterion established according to the NSG’s procedural arrangement is that applicant should be a signatory of the NPT. Both Pakistan and India are not signatories of the NPT thus pragmatically both states cannot join NSG. This veracity makes Pakistan’s argument questionable. If NSG establishes criteria by linking membership with NPT, it will diminish Pakistan’s chances to join NSG because Pakistan has no plan to sign NPT in future. The discriminatory nature of the NPT convinced Pakistan not to sign NPT, and when India carried out tests in 1974, Pakistan’s reservations were further validated. Reportedly, Pakistan exercised intensified lobbying with a delegation led by Foreign Secretary Aizaz Chaudhry in annual NSG plenary meeting held in Seoul and interacted with representatives from 25 countries on the sidelines of the session to oppose ‘exclusive membership’ for India. Recently, Kazakhstan and Belarus supported Pakistan’s bid to NSG which should be seen as more recognition to Pakistan’s credentials. At this time, Pakistan’s diplomatic overtures fructified with some NSG members in quest of detailed discussions within NSG to decide upon criteria for admittance of non-NPT countries to the group with a perspective to preserve the non-proliferation norms. But, Pakistan needs to diversify its foreign policy objectives and lobbying approaches if it is aiming at NSG membership in future. There are expectations that a special meeting of NSG will be held in approaching months. Consequently, associating Indian membership with NPT might delay Indian inclusion but in the long term the approach is short-sighted for Pakistan. Lately, US is working with the UN Security Council on a resolution to persuade India and Pakistan to limit their arms race, and ultimately both states will be pushed into CTBT. However, Pakistan should not accept any pressure to sign Comprehensive Test Ban Treaty (CTBT) for NSG inclusion unilaterally.