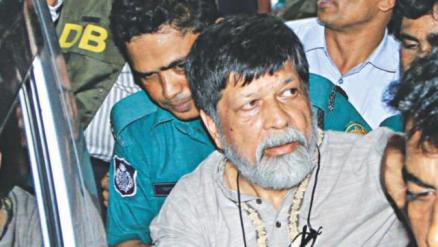 Shahidul Alam may be a renowned photojournalist, but he is even better known, locally and internationally, as an outspoken activist for democracy and freedom of speech.

Now he is imprisoned in Bangladesh for expressing his own opinions about a recent student uprising demanding road safety and government use of force to contain it.

Police arrested him late on Aug. 5 under Bangladesh’s Information and Communication Technology Act, which criminalizes publication of content deemed likely to disrupt law and order or harm religious sentiment.

The arrest came after Alam gave live Facebook updates on the protests, and an interview with Al-Jazeera slamming Prime Minister Sheikh Hasina’s government.

“Today I was in the streets. There are people with machetes in their hands chasing unarmed students and the police are standing by watching it happen. In some cases they are actually helping out,” he said.

As he was being taken to court on Aug. 6, barefoot and dragged along by a dozen police officers, Alam called out to reporters that he had been beaten in custody. Authorities denied it, and the court ordered a seven-day remand for questioning.

On the sixth day, police brought Alam to court with no prior notice, saying they had completed interrogation. Alam was returned to jail.

A bail hearing is now scheduled for Sept. 11, according to his partner, Rehnuma Ahmed.

“I met Shahidul on Tuesday,” she said. “I couldn’t confirm whether his leg pain was relieved or not.” she said.

Based on previous cases, Alam could be in jail for weeks or months.

‘It all comes around’

Local and international human rights organizations, and media groups have urged Bangladesh to release Alam — and colleagues around the world have spoken out about how he helped them in the past.

French rights group Reporters Without Borders called the day of his arrest “a dark day for press freedom.”

“The suffering now is being faced by a gentle, educated and courageous free thinker like Shahidul Alam. It is a shame on the entire nation,” exiled Bangladeshi secular writer Taslima Nasreen wrote on Facebook. She recalled how Alam hid her in 1994, when fundamentalists were calling for her head.

When Islamic fundamentalists carried out a series of brutal killings of secular bloggers, activists and intellectuals in 2015, Alam criticized government silence. “[T]heir passivity is tantamount to giving a blank cheque to those responsible for these extremely violent crimes,” he tweeted in August 2015.

At the time, when many writers and intellectuals were deleting their accounts – according to one of them – Alam cycled around Dhaka wearing a black T-shirt with the words in red, “I am a Blogger.”

Alam also helped obtain the release of two photographers from Myanmar who were arrested by police in Cox’s Bazar, Bangladesh in September 2017, according to Reuters journalist Andrew RC Marshall.

“’I’ve been in trouble before, and it was because of the generosity and the rapid response of my friends that I am still alive. So it all comes around,’” Alam replied when thanked, according to Marshall.

“Shahidul is a very politically conscious person, against all oppression and abuses, though he is not a politician. He usually takes a stand against any kind of injustice, doesn’t matter whether it is happening in Palestine or in Chittagong, or if it is an issue of saving the Sundarbans,” human rights activist Anu Mohammad told BenarNews, referring to the endangered mangrove forest on the Bay of Bengal coast.

Born in Dhaka in 1955 to a well-known microbiologist and a teacher, Alam earned a PhD in chemistry from the University of London before returning home in 1984.

An interviewer on U.S.-based National Public Radio once called him “a former chemist who became a photographer because he was tired of seeing images of the developing world through the lens of Western photographers.”

His photographs have been exhibited in many countries including the United States, France, Britain, Malaysia and Iran. He is a visiting professor at the University of Sunderland and an honorary fellow of the Royal Photographic Society, both in Britain, and has served on the jury of numerous international photography competitions.

Alam was producer and narrator of ‘The Birth Pangs of a Nation (2011), a documentary on Bangladesh’s war of independence and refugees who fled to India during that period.

John Godfrey Morris, a legendary picture editor at Life Magazine, called Alam’s autobiographical book “My Journey as a Witness” (2011) “the most important book ever created by a photographer.”

In 2014, the Bangladesh government gave Alam its Shilpakala art and culture award for achievements in photography, but it has also shown displeasure with his work in the past.

His show “Crossfire” (2010) on extrajudicial killings was closed down by the Bangladeshi government, then reopened after Alam challenged the government in court, according to the Drik website.

One of his iconic photographs captures a mural on a university campus depicting Noor Hossain, a pro-democracy activist killed by police in November 1987 as he was participating in a protest with the words “Down with autocracy” and “Let Democracy Be Free” painted on his shirtless torso.

“He himself is a very hard-working man, and is unparalleled in encouraging and training others.”

One of his students, Tanvir Murad, said Alam encouraged students to call him Bhai [Brother] instead of the more traditional Sir used to address teachers.

“Shahidul taught us that practice, which is very important to us,” he said.

Jesmin Papri and Sharif Khiam in Dhaka contributed to this report.