Off to the Races: Trump has completely captured the Republican Party, and it is unlikely to change in character while he remains in control

Off to the Races

Trump has completely captured the Republican Party, and it is unlikely to change in character while he remains in control, writes William Milam 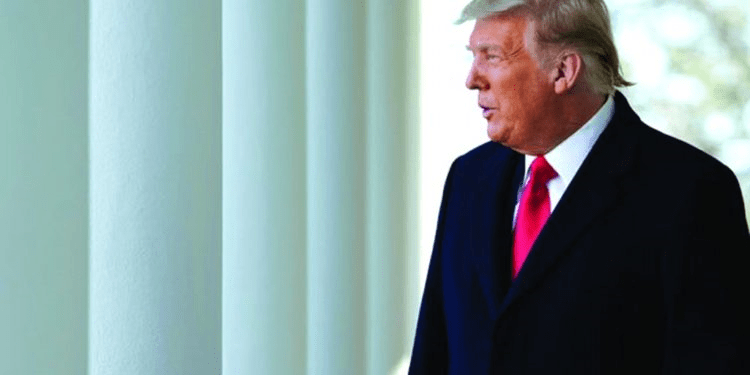 On Monday, November 23, when I started writing this piece, the dam had just broken, and President Trump’s vainglorious effort to undo the American democracy began to crumble. That evening the Director of the General Services Administration, who probably, on Trump’s instruction, had been holding up the beginning of the official transition process between an administration going out of office and one coming in, authorized it to begin. That day, the State of Michigan, which Joe Biden won by over 150,000 votes certified Biden as the winner in order that its electoral votes could be cast for him. Several Republican senators, obviously seeing the writing on the wall, congratulated Biden and recognized him as the next president. Trump, who has lost every court hearing he has sought to overturn the results, and every recount he has demanded, saw that he was beginning to lose the support and the patience his captive party had shown by keeping silent on the outcome for almost three weeks. To paraphrase Churchill, this is not the end, nor is it the beginning of the end, but it is the end of a bad beginning.

At some point in the next month or so, I expect that Trump will go to his Florida home for Christmas, and probably just not come back to Washington. Almost no one believes he will attend Biden’s inauguration; imagine the pain it would inflict on his narcissistic psychopathy to watch as the man who beat him by six million votes takes the oath to an office he thinks is his by right. Imagine also his concern that as soon as that oath is taken, he will face a world of legal jeopardy, because whether he pardons himself for possible federal crimes, or finds he can’t, he will not be able to dodge the states and private parties who seek to pull him into court. And there is the added worry that he owes someone or something around $400 million that will start to come due the minute he becomes a private citizen.

There is little reason to celebrate his departure as his actions over the three weeks since the election results make it clear he could well remain a danger to US democracy for some time. He has clearly signaled that he intends to remain in politics and in control of the Republican Party and might even choose to run for President again in 2024. While the final tally was not close—Trump lost by about six million votes—he still received second-highest number of votes of any presidential candidate (Biden got the highest), and retains a large base devoted to him personally, not to the Republican Party. Unless he loses in court and goes to jail, we have not seen the last of Mr. Trump.

But there is something to celebrate about the end of this sad melodrama. Our institutions and other guardrails, though Trump has battered and weakened them for the last four years, and tested them severely in the last three weeks, were resilient enough to prevent him from subverting the constitution and undermining the election. Make no mistake about it; that was his objective. He is an instinctive authoritarian, and these last three weeks have been an existential stress test for the US. He began his assault before the election and in the early hours after the election effectively told the American people that he did not accept one of democracy’s fundamental principles—the majority wins elections; then he set out to get those institutions to change the results, first creating deep doubt about the validity of mail-in ballots, insisting that most were fraudulent, and bringing many cases challenging the vote counts to courts, and second putting great pressure on state election officials and elected leaders, Republican and Democratic, not to certify the results where the race was close and these ballots were the difference. National Republican leaders, in great fear of the reaction of Trump’s devoted base remained, with a couple of exceptions, mute while Trump conducted this attack on the most sacred of all democratic norms, the right of the people to choose their leaders through free and fair elections. The fear was that the Trump base would pressure the Republican state and local officials to accede to his wishes. But state officials and their elected leaders, and the courts, Republican as well as Democratic, pushed back and stood firm. They are the heroes of our institutional resilience.

Some readers will be startled that I called Trump an instinctive authoritarian as it implies that at least subconsciously he has an ideology. I can hear in the distance shouts that Trump has no ideology and is just a crook in politics to enrich himself further. Yes, that is true, but instinctively he has understood all along that, as Fintan O’Toole notes in the New York Review of Books, Trump chose the Republican Party, currently a permanent minority party, when he chose to enter politics, he and the party must move toward authoritarianism to retain power. He obviously has also concluded that self-enrichment is easier and more lasting in an authoritarian political system.

The Republican party concluded in 2013, after Barak Obama’s decisive victory over Mitt Romney, that it had to reach out to minority groups beyond its traditional mostly white base to stay competitive. Romney’s loss made the sixth time in the seven previous elections that the Republicans had lost the popular vote in a Presidential election (although George W. Bush won the Presidency in the Supreme Court while losing the popular vote in 2000). But the party failed to follow up on that decision to work on expanding the base, at least I saw no sign of any follow up, which, inter alia, would have required some modification to their rigidly hostile treatment of the second Obama administration. It would have been hard and unfamiliar work for many Republicans. And then Trump came along, got the Republicans off the hook with his own brand of politics which excited a significant minority and won the 2016 election by getting narrow majorities in three industrial states, Pennsylvania, Michigan and Wisconsin which had been true to the Democrats in most previous elections. Those states all flipped back to the Democrats on November 3 and by larger margins than they were lost in 2016. Nationally, Biden is approaching 80 million votes and Trump about six million less, with still some votes to count in New York, so Biden leading 51 percent to 47 percent will end up with a victory of between four and five percent.

So, the trend continues — the Democrats continue to win the popular vote by large margins. Moreover, despite the fact that the hoped-for success of down ballot Democratic candidates did not materialize in this election, they made gains in states like Arizona and Georgia that gives them much hope for the future. But the shadow of Trump and his devoted base clouds that future. Trump has convinced his base, it appears from the polls, that he lost because of fraud. And he will call the Biden government illegitimate. There are two Senate seats in Georgia for which there will runoff elections on January 5 (neither winner got 50 percent of the vote). If the two Democratic candidates win, the Democrats will control the Senate with the Vice President’s vote, but if one or both don’t win, Biden faces a Republican Senate. His challenges multiply immediately. Trump, if he is free, will be able to take advantage of this to block legislation and endeavor to make the Biden administration look bad. Even with a Democratic Senate, Biden has a steep uphill battle with the Pandemic raging out of control and the economy in a deep dive because of the pandemic. But if his announcements of his team to this point are indicative of the quality of the administration, this will be one of the most highly competent administrations in a long time. With a few breaks, Mr. Biden may indeed be a memorable President, not one we want to forget like the last one.

Trump has completely captured the Republican Party, and it is unlikely to change in character while he remains in control. And Trump, with his devoted base, gives the Republicans another path to remain competitive. But when back in power, that path leads inevitably to authoritarian governance as it relies on minority rule. The Republicans have relied on this for many years, viz. their support of voter suppression, and they accept it, as demonstrated by their silence during Trump’s attempt to overturn the election results; surely they will interpret the popular vote numbers to mean they need Trump and Trumpism to remain competitive. Without Trump, we might see a new second party arise from the ashes of the old one.

The writer is a former diplomat, and Senior Policy Scholar at the Woodrow Wilson International Center for Scholars in Washington, D.C.

The article has been published in the Friday Times