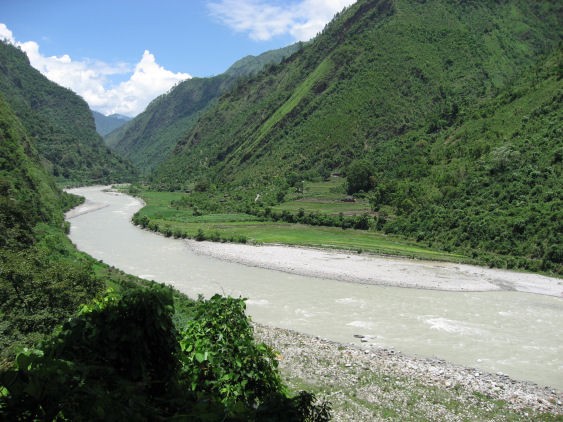 Rivers in any country are vital for the transportation, agriculture, recreation and livelihood of the people. They provide the riparian lifeline for plants, birds, fish, and animals living in the area, and for those stopping along their migration paths.  Each of these elements is significant to the economy of the eco-systems through which a river flows. Some significant rivers are even referred to as “the cradle of civilization”. For example, the Yellow River is called “the cradle of Chinese civilization”, as its basin is the birthplace of ancient Chinese advancements in scientific and social development, and was the most prosperous region in early Chinese history. But frequent, devastating flooding has also earned it its name as “China’s Sorrow.”

Some people such as the Hindus regard the Ganges River as a deity, and although we tend to glorify and even romanticize our rivers, we seldom do anything substantive to protect and save them from harm. Frequently, we do just the opposite.  Just think of the Ganges, a God to Hindus, and yet people in India defile this holy river in the filthiest of manner. The situation is not much different in Bangladesh, a riverine country. We recklessly and consistently pollute our rivers. The Buriganga River, which flows by the South-west flank of Dhaka city, has for decades been on the receiving end of some of the most toxic chemicals from hundreds of tanneries and thousands of other industrial facilities.

Decades ago, people all around Bangladesh lived by pristine water courses, including hundreds of rivers, millions of ponds, and scores of wetlands and lakes. Due to neglect and misuse, however, many rivers and wetlands have become a source of sorrow for their communities.

Rivers in small communities such as the less-known Rahamatkhali River, which flows through the town of Lakshmipur, also stand out in exasperation, not from the industrial pollution, but from being the dumping ground of the city’s solid waste. In the absence of proper regulatory and educational arrangements, kitchen waste, human and animal waste, and encroachment by predatory exploiters all serve to degrade the health of river. The Rahamatkhali in Lakshmipur is now almost completely run-down, and on the brink of losing its identity as a river. Its deterioration adds another dimension to the city’s growing list of challenges, whose burgeoning population also demands additional housing, roads, schools and healthcare services. The river’s condition has been worsening for more than four decades, and has reached an alarming state, with its banks eroded and waterways clogged with hyacinth and weeds. Ignorance and abuse have left the Rahamatkhali River a body of water in distress, the sorrow of Lakshmipur. There are scores of other rivers in Bangladesh that are close to becoming “sorrows” of their respective areas too, with more than 700 in danger of falling into similar states of woeful disrepair.

Under the guidance of some concerned and informed people, and initiative has since bee taken to generate public opinion and galvanize support in favor of protecting the river.  On May 28, 2010, the first ‘River Day’ was celebrated at Lakshmipur followed by the second such event held on February 5, 2011. The concerned people celebrated the day with speeches, recitations, music, a rally, and other events. The idea behind such a celebration was to generate public opinion and galvanize public support in favor of protecting the river. The event venue was the river bank, so the abject condition of the river was before the eyes of the speakers and the audience. The audience was overwhelmed by the event and demanded that such rallies be held in all riverine communities across the country, with the goal of motivating community members to persuade encroachers and abusers of rivers to abstain from unlawful occupation, and to stop misuse of rivers nationwide. It was the first occasion in which the social and environmental issues of riparian communities was discussed and shared among the people. The second River Day was celebrated on February 5, 2011, where young volunteers urged the national government to recognize River Days as a national event. The outcome of the River Days events gave a nudge to the local administration and brought some political attention as well. Following the second River Days events, the local district administration instituted an inquiry commission and put in place additional measures to identify and bring the encroachers of Rahamatkhali River to task. The organizers of River Days concurred that such events would help local businesses engage in meaningful dialogue with the Pourasava (Municipality), and advance the cause of restoring river watersheds.

On November 6, 2010, the City of Lakshmipur welcomed two more rallies, both of which were held in support of a pristine environment. Debating clubs and PORIBESH clubs (environmental advocacy groups) jointly marched the city streets. A mood of unity and resolve squashed through the barriers of inaction as the rallies progressed through the city streets of Lakshmipur.  The marchers carried placards and banners containing environmental slogans. After literally rallying around the city streets, the marchers gathered at Lakshmipur Town Hall to debate the environment: “Not poverty but the environmental calamity is the main challenge facing the world community,” was their topic for the debate. Local leaders and a number of concerned citizens spoke on this occasion. The main focus of the speakers was the need for concerted efforts in addressing the prevailing environmental challenges within their community, including the restoration of the Rahamatkhali River to its pristine state. These events were another learning experience for the City of Lakshmipur, which can now boast of being home to several voluntary student organizations determined to help their fellow citizens transform their neighborhoods into vibrant communities. The events helped inspire the people of Lakshmipur.

Lakshmipur PORIBESH, the linchpin organization for the River Days, also called upon people all across Bangladesh and around the world to learn about the values and benefits of celebrating River Days. The group is dedicated to sustaining biodiversity in riparian communities, and enhancing the quality of life for all riverine peoples through awareness building. The organizers of the River Days adopted an historic Charter for the protection of Rahamatkhali and other rivers in Bangladesh.

The idea of a “River Charter” is a great way to build awareness and self-motivation to protect the rivers. The Charter’s concept should be followed through at all levels and should be treated as a framework for enhancing accountability for appropriate use and protection of resources in Bangladesh. The issue of the protection of river cannot be treated lightly; the lives of hundreds and thousands depend on rivers.

To bring back life to dilapidated rivers, regular celebration of River Days – an awareness-building tool – is a scheme worth considering for Bangladesh and other developing nations where regulatory tools and manpower in the public sector are not adequate for the protection of rivers and other source waters.

To provide one sixth of the world population the access to safe water, and to save approximately two million children from death due to water-related diseases and poor sanitation, the protection of rivers in all parts of the world must be achieved.  The task requires public and private sector partnership at all levels, but especially the community level.

What is immediately needed is awareness built through social mobilization. The celebrations of Rahamatkhali River Days were landmark events in the growth of environmentalism at the community level. They provide a useful template for social organization in river communities all across Bangladesh and the third world.  River Days can help bring communities together, disseminate necessary information, and promote an understanding of the benefits of protecting our local water ways. Their promotion can be a boon for us all.  ■

Nurul Huq is the President of PORIBESH (www.poribesh.org), an environmental awareness building organization, and mentor for the environmental event volunteers at Lakshmipur.