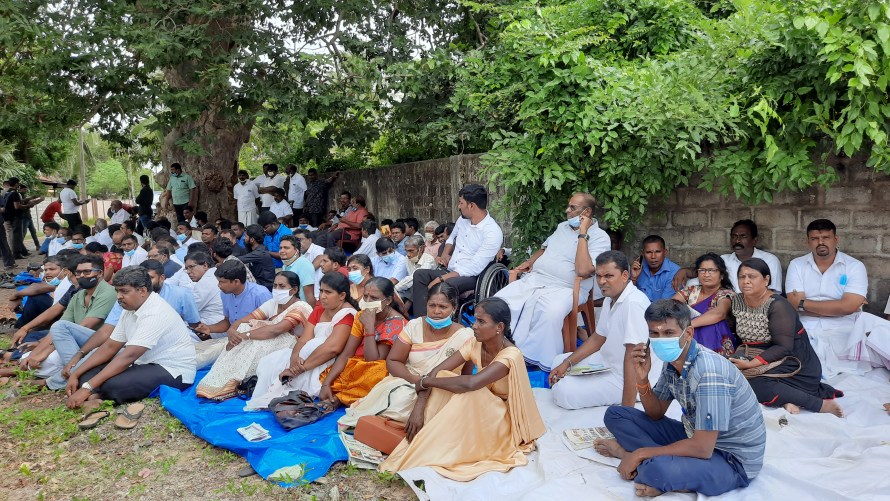 A series of protests are currently underway across the North-East today as Tamils across the homeland commemorated the death of LTTE’s Lt Col Thileepan, despite a Sri Lankan court ban and intimidation from the security forces.

Politicians, including from the Tamil National People’s Front (TNPF) and the Tamil National Alliance (TNA), joined civil society members and others to commence a fast at the Chavakachcheri Shiva Temple this morning at 10.48 am – the exact time that Thileepan passed away in 1987.

The entire North and East of Sri Lanka was paralysed by a mass protest campaign (hartal) on September 28, against the right-wing government of President Gotabhaya Rajapakse.

This was triggered by banning of a commemoration of a former LTTE leader, Thileepan, who died on hunger strike in September 1987, after the Indian military occupation of the North and East of Sri Lanka.

Tamil groups organised commemorations of Thileepan from September 15 to 26—from the day he started fasting until the day he died. However, police obtained a court order on September 14 prohibiting all protests, declaring that Thileepan was a member of the Liberation Tigers of Tamil Eelam (LTTE), which has been banned as a terrorist group. The order added that “remembering a banned organization…. is an offence punishable by arrest under the Prevention of Terrorism Act.” The court order allowed police to detain protesters under the draconian anti-terror law.

Police then arrested former Tamil National Alliance (TNA) parliamentarian M.K. Sivajilingam on September 15 for violating the court order, releasing him 24 hours later on bail. They removed photos of Thileepan at his memorial site in Nallur, Jaffna. Police also threatened a group of Jaffna University students who were protesting in front of the university.

The hartal was called by United Tamil Nationalist Parties, a hurriedly-formed front of Tamil bourgeois nationalist parties including the TNA, the Tamil People’s National Alliance, the Tamil National People’s Front and several other groups. These discredited parties called the protest not out of concern for democratic rights, but to control rising popular opposition and shore up their fast-dwindling support.

Mass participation in the protest, however, reflected broader opposition to police-state measures and determination to defend the democratic right to conduct commemorations and legitimate struggles.

Tamil and Muslim people in the north-east participated together in the hartal, shutting down all public affairs and business. Schools were open, but students did not attend. Lawyers did not appear in court. Public transport came to a halt, as there were no passengers to travel. Only government offices and banks were open.

Teachers and state employees attended work only because authorities indicated that otherwise they would be penalised. Police and the military were patrolling the streets, threatening traders to force them to open their shops.

In Vavuniya district, military forces visited schools to compile lists of teachers who did not attend school. Military intelligence units were deployed to gather information, according to local reports.

Small groups of government supporters held “protests” against the hartal, but the hartal continued throughout the day. People in the east also held similar protests.

Mass participation in the hartal despite police-military threats in the north and east reflects growing opposition among workers and the poor in the entire country against mounting attacks on living conditions and democratic rights under President Gotabhaya Rajapakse.

In recent years, joint strikes and protests of Sinhala, Tamil and Muslim workers erupted despite the Colombo political establishment’s communalist propaganda, while Tamil parties tried to rouse nationalism to divide the working class.

People across the North and East are still suffering from the devastation of the thirty-year communal war waged by successive governments in Colombo against the LTTE. Over 100,000 people died during the war, and thousands are missing.

Thousands still live in houses without basic facilities. There are about 90,000 war widows and many disabled persons in the North and East without proper means of living.

Furthermore, the North and East have been under military occupation for about four decades, facing continuous surveillance and harassment. The Rajapakse government’s repression and continuous anti-Tamil provocations are part of its drive towards a dictatorship based on military.

Two days earlier, on September 26, a hunger strike was held at Chavakachcheri Sivan temple, south of Jaffna city, in commemoration of Thileepan, while dozens of police were watching. At the end of the action, Mavai Senadhirajah, the leader of the Illankai Tamil Arasu Kachchi (ITAK or Federal Party, the leading party in the TNA), thanked police for their “support.”

The ITAK leader’s remarks reflected the close allegiance and support of Tamil nationalist groups for the repressive state forces occupying the North and East. Significantly, Senadhirajah made those remarks while the police and military forces were roaming Jaffna, threatening people and arresting his fellow TNA member, Sivajilingam. However, Senadhirajah did not condemn the actions of the security forces or the Colombo government which is directing them.

The TNA acted as a de-facto partner of the previous government of President Maithripala Sirisena and Prime Minister Ranil Wickremesinghe, helping its austerity program and undermining war crimes investigations. In recent months, its leaders have sought a rapprochement with President Rajapakse, who is fast moving towards entrenching presidential dictatorship. Every section of the Sri Lankan bourgeoisie fears mounting social opposition amid the crisis accelerated by the global COVID-19 pandemic.

At times, they try to stir memories of the LTTE’s past, with politically impotent and bankrupt actions aiming to confuse workers and youth.

All Tamil nationalist parties, including the defeated LTTE, based their perspective on appealing to the Indian bourgeoisie and to imperialism, particularly the United States, to achieve a power-sharing arrangement with the Colombo government. After the LTTE’s defeat, these parties have gone further to the right, supporting US geopolitical interests against China. The TNA’s backing for the regime change operation to oust President Mahinda Rajapakse in 2015, replacing him with Sirisena, was part of this shift.

The LTTE agreed with the accord dictated by New Delhi, which acted as ruthless regional policeman. The Tamil bourgeois parties, then mainly rallied under the Tamil United Liberation Front (TULF) and other armed militant groups, fully supported the accord and the Indian military intervention.