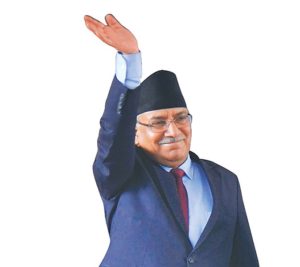 Says he wants to break the culture of not keeping word

Prime Minister Pushpa Kamal Dahal resigned on Wednesday to what he called honour a deal he had reached with the Nepali Congress (NC) some 10 months ago.

PM Dahal announced his resignation in a televised address, saying he wanted to break the culture of breaking political promises and that he would now move forward as per the deal he had reached with the NC.

Dahal’s resignation has paved the way for NC President Sher Bahadur Deuba to take over the government leadership.

The NC and CPN (Maoist Centre) in July last year had forged a “gentleman’s agreement” which said Dahal would become the prime minister with the NC’s backing until the local level elections and then make way for Deuba to take over.

“I am announcing my resignation as per the gentleman’s agreement reached with the Nepali Congress, ending the dearth of morality in Nepali politics where even written agreements remain unimplemented,” said Dahal. After the address, Dahal headed to the Office of the President to submit his resignation.

President Bidya Devi Bhandari approved his resignation on Wednesday itself.

Dahal’s 30-minute address mainly focused on what his government achieved in the last 10 months, which ranged from ridding the country of power cuts to successful conduction of the first phase of local elections to GDP growth to signing of the Belt and Road Initiative with China to Kathmandu-Nijgadh Expressway.

Despite his party’s failure to win even 50 seats in the first phase of local elections, Dahal appeared content as he said: “Who wins or who loses never bothered me. If we had cared only about winning or losing, elections would not have taken place. What I know is the federal democratic republic has won, the entire country has emerged victorious.”

PM Dahal, however, did not mention constitution amendment, one of the major commitments he had made with the Madhes-based parties before returning to power.

Dahal maintained his composure throughout his address on Wednesday in stark contrast to his body language nine years ago.

Dahal first became the prime minister after sweeping the Constituent Assembly elections in 2008, two years after his Maoist party laid down the arms and joined mainstream politics.

But he was forced to step down on May 4, 2009 after his decision to remove the then Army chief Rookmangud Katawal was overturned by the then President Ram Baran Yadav.

As he thanked his coalition partners, Dahal said that the “biggest problem of our political leadership is lack of propriety and culture of using [people]”. “If I were to be honest, I must say all of us have fallen victim to that. There are ample examples of written and unwritten agreements between parties and leaders being torn apart,” he said, adding: “Leadership that cannot keep its word cannot lead the country.”

Stating that there are some limitations of coalition governments, PM Dahal said he, however, could work freely on most of the occasions.

Without naming anyone, PM Dahal also took a potshot at the erstwhile Oli government, saying he did not sell dreams but concentrated on actions. “Some friends had raised questions about the status of the expressway, Belt and Road Initiative and postal highway. The questions were genuine. The motive of those who asked those questions was wrong. There was disbelief, there was challenge in those questions,” he said without naming anyone. Dahal, however, expressed his gratitude to the main opposition for its wish that his government should hold the second phase of polls.

Even after Dahal’s resignation, there still is confusion as to under whose leadership the second phase of polls will be conducted. It could take days before Deuba becomes the prime minister.

Maoist Centre Spokesperson Pampha Bhusal, however, said a new government will be formed before the second phase of elections.

On his part, PM Dahal said: “I will continue to be active for the uplift of the country and people as a politician, parliamentarian and a citizen.” “My efforts for national unity and consensus will always continue,” he concluded.