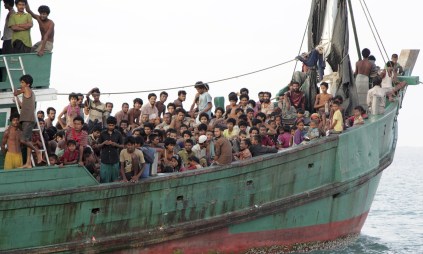 Myanmar (previously known as Burma) is a vast country of 676,550 sq. km. or 261,217 sq. Miles on the north-east coast of Bay of Bengal. It is between Bangladesh and Thailand though it has also long shared a border with India and China. Its population is only about 49 million. The majority are Buddhists. Next large population is ethnic Bengali Muslims and a small percentage of Indian Hindus. There are some Christians and Chinese in the north. Arakan in the west and south of Bangladesh had a Muslim majority. Arakan, at one time, was part of Bengal. It is a country rich in mineral resources – oil, gas and precious stones. The land is fertile producing far more rice than what it needs. There are fishing resources – both sweet water fish as well as sea-fish. Burmese Teak wood is very famous. Burma was a happy and prosperous country until 1962 when the military took power.
When the military removed the democratically elected civilian government in the then Burma, they thought they would eliminate all corruption and with no one to oppose their programs, they would achieve a miracle and win the heart of the people. General Ne-Win soon realized he was wrong. The military’s education and training fell far short of the requirement in the field of politics, economics, and diplomacy. Instant nationalization of banks, insurance, trade, commerce, and industry created a big vacuum. The entrepreneur’s left the country and in most cases managed to get most of the capital out of the country. The military lacked the expertise necessary to fill the vacuum. There was no sense of direction. Foreign investors lost all confidence. Burma suffered diplomatic isolation.

Major cities bore the images of derelict buildings and structures. Poverty became wide spread. Store shelves were empty. Public health services collapsed. Inflation was sky high. Local currency lost its value. Large cities became prostitution dens. Despite all that poverty, the junta would arrange big military parade every year to show the public how the country was becoming a military power to suppress its people – destroy freedom of speech, human rights, democracy, and justice. Even the education sector suffered badly. I talked to many young Myanmar graduates and was disheartened to see their lack of knowledge. The military junta introduced nuclear technology in several universities so that they can eventually develop atomic bombs. People could not even leave the country so comfortable. The military would make big money even for the issue of passports.
The military failed to achieve any success. The country got poorer day by day. To divert the attention of the poor, hungry people the government decided to rename the country as Myanmar. That was not enough. They spent millions to build a new capital. The junta realized that they have to find some new reason for all their failures. They found that in the Muslims living in Myanmar. It reminds me of Hitler as to what he did with the Jews living in Germany. Another military dictator Idi Amin of Uganda did the same with Indians living in Uganda. Surprisingly he motivated and unified the Ugandans to get rid of Indians as if all problems would be solved as soon as the Indians leave. In practice, the country got poorer, and eventually, Idi Amin was dethroned. The military junta followed the example of Idi Amin. They carefully drafted a new Nationality Act in 1984 to deprive the Muslim population of their right to citizenship. Even though these people had been living in Burma for ages, they called them as Infiltrator or intruders. They unified the majority Buddhists in their repression of the Muslims in the everyday acts of killing, burning, looting and raping. It was not confined in Arakan alone. The gold and jewelry business of Muslims in Yangon were over-night taken over by local Buddhists. The Muslims were deprived of basic rights – no licenses for trade, no bank account (in fact their accounts were confiscated), no educational facilities for their children and no medical facilities. Thousands of them were pushed to Bangladesh. Others were taken to concentration camps set up by the government. They re-named Arakan as Rakhine, and they started referring to their Muslim population as Rohingyas.

It is interesting to note that Bangladesh has a large Buddhist community who enjoy equal rights as their Muslim neighbors. Malaysia has a large population of Chinese and Indian Hindu ethnicity. In Singapore, there are three state languages – English, Mandarin, and Tamil. In the same region, the Muslims in Burma/ Myanmar are subject to ethnic cleansing. Muslims, Hindus, and Christians had been living peacefully in Burma for ages. Ever since the military takeover in Burma in 1962, people had been trying to leave Burma and there is no question of any new immigrant. The 1984 Act has been created deliberately to push out the Muslims as infiltrators or to exterminate them.

Aung San Suu-Kyi was the daughter of a military officer during British rule. He was a great freedom fighter but died mysteriously just before the independence. Her mother was given a diplomatic role in Delhi, and Suu-Kyi received good early education. She went to the UK for higher education where she met her husband. She was settled in the UK with her husband and two sons. However, she had to come to Myanmar to see her mother on deathbed. It was in Yangon when she went to Pagoda, a large group of people gathered chanting her father’s name. They did the same near her house. She got motivated, and on the steps of Pagoda, she declared before a cheering crowd that she would not leave them alone. She would be there to continue the struggle for democracy. She never returned to the UK. Her husband died and yet she did not come out of Myanmar knowing that she would not be allowed to return. She became the symbol of the struggle for democracy. The military junta put her under house arrest. The Nobel Peace Committee awarded her the Peace Prize.

Myanmar was facing diplomatic isolation. British Prime Minister and US President would visit Myanmar only to meet Suu-Kyi. The military got the message. They decided to give the election to a civilian government. Here again, they carefully drafted a constitution by which the military will still retain their grip. The defense and internal security will remain with them. They will hold enough seats so that constitution cannot be amended. They made sure that Suu-Kyi can neither become head of the state or head of the government. By the time of the election, the Rohingya issue was made a national issue. Suu-Kyi knew that if she opens her mouth on Rohingya issue, she will lose the support of ordinary Myanmar Buddhists. She remained silent and won the election.

The military kept up the heat on Rohingya issue to maintain pressure on Suu-Kyi. Under military pressure, she refused to welcome an OIC (Organisation of Islamic States) mission. She even declined to accept a UN team. Finally, she appointed her independent commission with Mr. Kofi Anan of Ghana (former secretary-general of the UN). Mr. Anan has the moral strength and power to stand above all considerations and identify the truth. His recommendations are:

The 1984 Nationality Act was not fair; it must be reviewed;
The Rohingya Muslims cannot be stripped of their citizenship;
Their isolation in concentration camps is wrong;
Confiscation of their property is illegal and unlawful;
They must enjoy equal rights for business, education, and health-care;
All sorts of terror including killing, burning, looting and rape must be stopped;
All discrimination must end, and the government should assist social integration.

Long live Kofi Anan. No sooner Mr. Anan submitted his report, the military along with local thugs renewed their suppression and oppression against the Muslims. This time the military came with a new theory. According to them, an armed militia group attacked security forces and that they are doing a clean-up operation. Myanmar military is trying to justify their hold on power. Since 1977, the Myanmar military has been pushing and chasing Muslims to Bangladesh. Bangladesh is world’s most densely populated country. It cannot accept any more refugees. Bangladesh is also trying to push them back to Myanmar. The question is: where will they go?

The freedom fighters of Palestine, Kashmir and Arakan, are not terrorists. They are soldiers of human rights and democracy. They shall win.
Under pressure from the military, Suu-Kyi is still towing their line. It is the time she should have the moral courage to stand for the truth. She cannot hide the truth. Her silence will tarnish the Nobel Peace Prize, as stated by Malala, the youngest winner of Nobel Peace Prize. Suu-Kyi should openly declare her intention to implement the Kofi Anan report. The Rohingya crisis is a creation of Myanmar military. Suu-Kyi has a chance to resolve the matter politically. That is the only solution. Otherwise one day Myanmar is likely to lose Arakan/ Rakhain.
A clash with the military has to take place now. Nowhere in the world, the Constitution keep the elected government answerable to the military. It should be challenged in the Supreme Court. If Suu-Kyi cannot establish the rule of, law then she should resign. She should not make a mockery of democracy.

As it stands today, there are 650,000 Rohingya refugees in Bangladesh. Another 150,000 are there in different concentration camps. About 50,000 young Muslims have been killed by the military. Villages have been burnt, and women raped. The UN, USA, UK, Turkey, Malaysia, Indonesia and Maldives have condemned the Myanmar government for its atrocities. Indonesia, Turkey and its President Erdogan deserve the praise for their pioneering role. Surprisingly Saudi Arab, Pakistan and India are silent.

The OIC should convene an emergency meeting and draw a resolution boycotting all trade and investment with Myanmar. The United Nations should condemn the atrocities and impose sanctions against Myanmar until a political solution is achieved. Mean time all donor agencies should come to Bangladesh to provide humanitarian assistance. We must not forget that generations of Rohingas are growing up without any education – total liability on the land they live in.