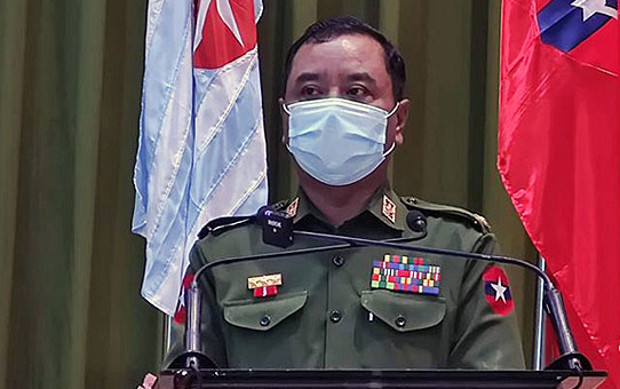 Myanmar soldiers’ videotaped confessions that they committed atrocities against Rohingya Muslims during army sweeps of their villages in 2017 are “not true,” an army spokesman said Wednesday, dismissing the admissions recorded by the rebel Arakan Army (AA) as coerced.

Privates Myo Win Tun and Zaw Naing Tun confessed in video interviews to killing villagers during operations three years ago in Rohingya communities in Buddhist-majority Myanmar, after they deserted the government army and contacted the AA for assistance.

The AA, which has been fighting a 21-month-long war with Myanmar forces in Rakhine state, recorded their confessions that they took part in violence – which included torture, mass rape, indiscriminate killings and arson – targeting Rohingya communities in northern Rakhine state.

The recordings were obtained and analyzed by the Southeast Asian group Fortify Rights, while the two privates are now in the custody of the International Criminal Court (ICC) in the Netherlands.

Myanmar military spokesman Maj. Gen. Zaw Min Tun said officials have reviewed the AA’s videos recorded when the two privates were “captured and detained” by rebel troops, and concluded that their statements are false.

“There is the possibility that they were giving the testimonies as they were taught out of fear of being killed by enemy troops,” he told Radio Free Asia (RFA), a sister entity of BenarNews. “This is very common in armed conflicts.’

“We also have investigated the confessions from the AA’s videos, so we can briefly confirm that what they have stated in them is not true,” he added.

RFA has not seen the video interviews and has been unable to independently verify the soldiers’ accounts.

“After all examinations, we have concluded that the confessions of these two soldiers are credible, so we released the statement,” he said.

In mid-August, the two former soldiers turned up on the Bangladesh border and asked Bangladeshi authorities for protection, Fortify Rights said.

As a state party to the Rome Statute, the treaty that established the ICC, Dhaka notified the tribunal of the presence of the two men.

The international court in November 2019 authorized an investigation into alleged crimes against humanity perpetrated by Myanmar soldiers against the Rohingya.

AA spokesman Khine Thukha told RFA that the two soldiers were not detained by the rebel force, which safeguarded them.

He also said the AA has cooperated with the international community to ensure justice and has transferred evidence regarding mass killings committed by the Myanmar military to credible international organizations.

The two privates were in battalions that were active in northern Rakhine state during military-led “clearance operations” against Rohingya civilians in 2016 and 2017, during which thousands were killed and about 840,000 others fled to neighboring Bangladesh where they live in massive displacement camps.

Myanmar – which also faces genocide-related charges at the International Court of Justice (ICJ), the U.N.’s top court – last year defended the military’s actions against the Rohingya, saying it occurred during operations to sweep northern Rakhine of Muslim insurgents who had attacked police.

Military spokesman Zaw Min Tun urged the international community to return the pair to Myanmar so authorities can investigate and prosecute them there.

“Both the military and the government have announced ongoing inquiries and investigations regarding conflicts in Rakhine state, so these privates can give their testimonies in Myanmar,” he said. “These two privates should be transferred to Myanmar’s government.”

ICC spokesman Fadi El Abdallah referred questions about the investigation to the Office of the Prosecutor.

“In order to do that, you need to write them an email,” he said.

RFA repeatedly called and sent emails to the office, but did not received a response before publication.

The military is proceeding with its investigations according to the recommendations in the report of the Independent Commission of Enquiry (ICOE) that the Myanmar government set up to probe a military-led crackdown on the Rohingya in 2017, Zaw Min Tun said.

“We are focusing on the areas outlined in the ICOE report,” he said. “Since we have started the court of inquiry, we have widely invited the submission of evidence and witness testimony.”

RFA could not reach government spokesman Zaw Htay for comment.

Monywa Aung Shin, spokesman for the ruling National League for Democracy (NLD) party, said it is too early to reach a conclusion on the two privates.

“We need to assess why they went there, how they got there, and what kind of pressures they are being subjected to,” he told RFA. “Instead of assuming everything they said is right, we need to check the conditions they are in.”

Thein Tun Oo from the pro-military think tank Thayninga Institute for Strategic Studies said people should remember that the government has declared the AA a terrorist organization when assessing the soldiers’ confessions.

“We should argue to what extent we can trust the testimonies of deserters who have sought refuge with a terrorist organization,” he said, noting that the confessions have yet to be independently confirmed.

“I think these are just plots to try to pressure Myanmar authorities,” he said.

Muslim-majority Bangladesh, the soldiers’ conduit to the ICC, may have cultivated close relationships with insurgent groups including the AA and the Arakan Rohingya Salvation Army, a militant group whose attacks on police outposts triggered the 2017 crackdown, Thein Tun Oo added.

Muslim leader Aye Lwin, who was a member of a commission headed by former U.N. chief Kofi Annan that called for an end to restrictions on the Rohingya minority to prevent further violence in Rakhine state, said ICC judges should determine whether the video can be admitted as evidence.

“It is best if the judges decide whether their testimonies are admissible,” he told RFA. “There are judges who have worked on similar cases and war crimes. There are standards for admitting or dismissing witness testimony.”

So far, Myanmar’s armed forces have conducted only two rare courts-martial of officers and other soldiers accused of committing grave rights abuses during the 2017 crackdown on the Rohingya.

In one case, four officers and three soldiers were each sentenced in March 2018 to 10 years in prison for killing a group of Rohingya men and boys in Inn Din village in a massacre revealed by Reuters news agency. But in November of that year, Myanmar’s military commander-in-chief pardoned and freed them.