When people are on the move, money follows. Around the world, hundreds of millions of people in low- and middle-income countries depend on remittances from family and friends in wealthier nations. Annual remittance flows top half a trillion dollars, and for some countries, these international person-to-person cash transfers are a critical part of the economy, accounting for 25% of GDP or more.

In this special edition of Signal, we take a look at the politics of the global remittance market, with special visits to Central America, Eastern Europe, Southeast Asia, and the Middle East. Enjoy!

Some think of globalization mainly as cross-border flows of goods, services, ideas, and information. But crucial to globalization’s dynamism, and its powers of disruption, is the accelerating global movement of human beings. In fact, this is one of history’s oldest stories. People judge life “over there” to be safer and maybe more prosperous than life “over here,” and they hit the road in search of opportunities for richer lives and livelihoods.

And many of these people hope to help others. In every region of the world, migrants cross borders that separate poorer countries from wealthier ones in hopes of earning money they can share with those they’ve left behind, and the digital age has made it much easier for someone earning a relatively high wage abroad to send money back home in a matter of seconds. These financial flows are known as “remittances,” and they account for an increasingly large part of global economic activity. Small payments by large numbers of people add up: The World Bank estimated earlier this year that global remittances will reach $630 billion in 2022, a 4.2% annual jump.

The benefits of this process are widely shared. Remittances add wealth, opportunity, and therefore political stability to countries and families that need them. That’s especially important for poorer people in countries like India, Mexico, China, the Philippines, and Egypt, the world’s five largest remittance recipients in 2021. It’s even more important for countries like Lebanon, the Central Asian states, and small Pacific island nations, where remittance inflows make up from one-third to one-half of GDP.

They can provide a humanitarian lifeline for people trapped inside countries in trouble: Remittances once intended for Ukraine may now be flowing into the neighboring countries, particularly Poland, which is housing millions of Ukrainian refugees who need financial support. This boost for people in developing countries is never more important than in a time of rising global prices for food, fuel, and other basic necessities. Wealthy countries benefit too. Immigration increases the supply of labor by welcoming people who will, in some cases, take jobs that citizens of rich countries don’t want, putting downward pressure on production costs and retail prices.

But there are all kinds of disruptions that can break the virtuous circle of migration and remittances. Frictions arise when migrants create downward pressure on wages for some locals and social tensions when cultures clash. Fears of uncontrolled cross-border flows of people have created anxiety and anger in America and Europe. Wars and their fallout disrupt flows of money and people, a trend most obvious now in migrants from the Caucasus and Central Asia facing tougher economic conditions in Russia. The pandemic has also slowed migration in many regions, in some places dramatically. China’s “zero-COVID” policy, in particular, has made life much harder for those who would work in that country.

There is another potential source of remittance disruption: the cost of wiring money rises too. The global average cost of sending $200 reached 6% in the fourth quarter of 2021, according to the World Bank. That’s twice the level that the UN says will help poorer countries reach their development goals. It’s even more expensive to send money to Ukraine from some places and especially expensive to wire money to sub-Saharan Africa. Migration and the economic importance of remittances will surge in coming years as climate change, in particular, gives more people reason to move. 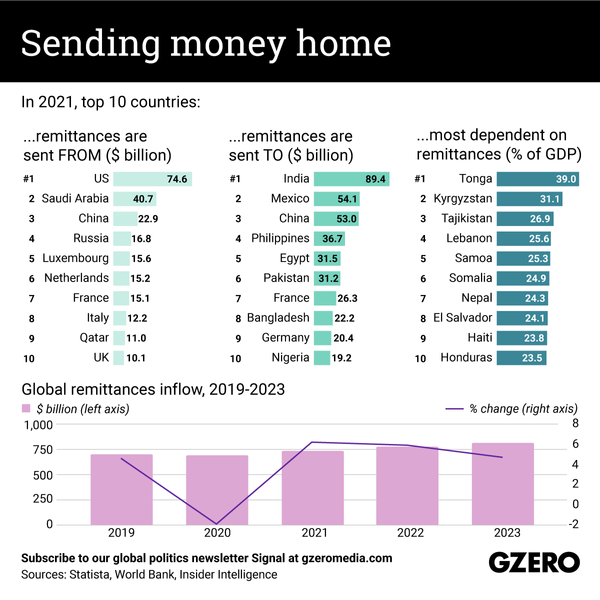 Migrants leave their countries of origin not only to find work opportunities — the hard-earned money they send back helps keep the lights on back home. After a COVID-related blip in 2020 – which saw a small decline but defied disastrous predictions – global remittances sent by migrants to relatives in their countries of origin are again on the upswing. That’s a big deal for the migrants’ families and for governments of nations who rely on that revenue to keep the economy from collapsing. We take a look at the countries that send and receive the most migrant cash, those that most depend on remittances, and how inflows have performed recently.

The article reproduced from The Gzero Newsletter SIGNAL