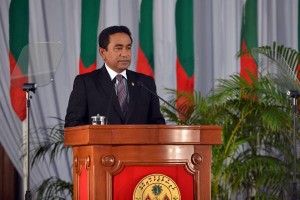 Coinciding with the third Maldives Investment Forum (MIF) in New Delhi, the Government of President Abdulla Yameen paid up the Indian infrastructure major GMR Group $ 271 m against the controversial and equally ill-fated Male airport deal. The GMR payment flowed from the final award of the Singapore arbitration court, after Yameen had made the commitment to then Indian Prime Minister Manmohan Singh, during his maiden overseas visit, on New Year Day, 2014.

GMR had originally claimed a high $ 1.4-b, sand scaled it down to $ 800 m later, after then Maldives President Mohammed Waheed had unilaterally cancelled the airport deal in 2013. The predecessor Government of President Mohammed Nasheed had signed the construction-cum-concession contract in 2010, but from the beginning it was caught in political, procedural and legal disputes in the country.

The arbitration award is closer to the Maldivian Government calculations and consequent claims. The Government has also claimed to have sticking to its commitment of paying up from the public sector airport company’s internal resources without external borrowings. The implications, at times pronounced, was that the airport was making more money than what the GMR was paying and had promised during the 25-year life of the cancelled contract.

President Nasheed, now in UK on political-asylum, lost no time in pointing out that the Government would have got substantial sums from GMR if only the contract had been allowed to be operational still. After the cancellation of the contract, Nasheed and also his Maldivian Democratic Party (MDP) had pointed to the huge financial commitment and losses as and when the Government of the day was called upon to pay GMR’s claim of $ 1.4 b.

While paying up GMR, the Government also announced that all dollar transactions in the country would be routed only through the Maldivian Monetary Authority (MMA), the nation’s central bank, to ensure that the common man did not face any problems, to meet overseas healthcare and education expenses. Earlier, commercial banks were also involved in legal dollar-trade. Simultaneously, the decision for the MMA to control all dollar transactions and also purchase bonds to help GMR payout have questioned past claims about the public sector airport company making huge profits – and diversion(s), if any.

Ahead of the GMR pay-out, Attorney-General Mohamed Anil reiterated repeated Government claims that the Male Airport Company Ltd (MACL) was paying the Indian corporate from its ‘massive reserves’ accumulated since the latter’s exit. However, pro-MDP Maldives Independent has since quoted MMA Governor, Dr Azeema Adam, to say that the central bank had purchased $ 140-m worth of Government-secured MACL bonds, against monthly interest and principal repayments, two days before the GMR settlement.

The web-journal also quoted MDP leaders to argue that the forex reserves would be at a critical low, following MMA’s bond-purchase. The central bank has however questioned this, saying that the November position would be made known, as has been the practice in early December. According to published accounts, MMA’s usable dollar-reserves stood at $ 187 m by end-October, enough to meet 3.2 months’ import-needs.

According to the Maldives Independent, the MMA also pooh-poohed MDP criticism on the need for a constitutionally-mandated parliamentary resolution before it expended its reserves, saying the provision did not apply to ‘forex reserves’ but only to domestic reserves. The report claimed that already the US dollar was trading at around Rf 17.50 against the floating-rate pegged at Rf 15.70, weeks earlier. Independent of the current dollar-crunch, according to SunOnline, AG Anil has claimed credit for the Yameen Government recovering $ 15 m through court-action after the Anti-Corruption Commission had given them up as lost to the State.

The US dollar, the international currency that is popular in daily life and trade in the country, had been artificially pegged at a lower rate under the Gayoom dispensation, as it went on to fund overseas education and hospitalisation expenses of ordinary Maldivians. Under IMF guidelines for funding, the Nasheed dispensation partially floated the Maldivian ruffiya (Rf) against the US dollar, leading to a sudden 25-30 percent increase in dollar-rates. This was among the contributing factors for Nasheed’s first democracy government in the country losing its sheen within a year or so.

However, the fact remains that neither can the Maldivian economy fund the high infrastructure required in these sectors, nor has the nation’s low population in the country, pegged at 400,000 or less, justified the same. The socio-political discourse on allowing foreign funding and overseas patients and students to in the higher education sector too has remained unending. The local laws against post-mortem examinations and cadaver usage for medical studies have also come in the way of starting up a medical college, in the country, for instance.

According to the Maldives Independent report, “Prior to commencing direct sales to the public, the MMA provided $4.3 million per week to the commercial banks. By the end of October, the MMA provided a total of $192 million to commercial banks, of which $ 53 million was allocated for Maldivians travelling abroad. Since taking over dollar sales last Sunday, the central bank has sold $2.7 million as of Thursday (24 November 2016), serving 1,993 customers with 5,635 tickets during the past week.” The journal also reported long-queues outside MMA, and a black-market in tokens, for a place in the queue.

As coincidence would again have it, the Yameen Government has proposed the re-introduction of $ 25 airport development charges for all passengers, including Maldivians, flying out of the country. While committing the proposals contained in Budget-2017 to the parliamentary committee for recommendations, members cutting across party-lines, argued for and against the twin-levies of $ 25 development charge, and $ 12 service-charge, the latter payable only by foreigners.

The GMR deal had included domestic passengers flying the domestic sectors as well. The development charges became inoperable after a civil court struck down the provisions for putting domestic passengers to continual hardship of the nature. As the court implied, internal air-links remain the main mode of transport to and from far-flung islands to capital Male.

Interestingly, despite the ongoing political controversies attending on the Yameen presidency and the persistent MDP efforts to have him ousted/replaced, party MPs moved a bill in the People’s Majlis, or Parliament, to introduce income-tax in the country. Two members of the relevant parliamentary committee attaching to the Yameen faction of the ruling Progressive Party of Maldives (PPM) backed the move.

The MDP, since its days in office (2008-2012) has been backing all efforts to widen the tax-net and consolidate tax-revenues, if only to promote market capitalism and cut down on ever-increasing external borrowings. Almost from day one in office, and even while in the Opposition, President Yameen seems to follow an economic policy similar to that of Nasheed-MDP.

Together, the Nasheed-Yameen economic policy (apart from the latter’s over-dependence on Chinese investments) are also at variance from Yameen half-brother Maummon Abdul Gayoom’s ‘socialist agenda’ through his 30 long years in office. Now that the Gayoom brothers are at daggers drawn, Yameen’s economic policies too may come under attack from the Gayoom faction.

A clearer picture might emerge if and only if Gayoom hopes to be able to take on Yameen on the political and electoral fronts without cooperation with and/or from Nasheed and the MDP. The chances for the same however look slim just now, after three of the eight PPM parliamentarians backing Gayoom after the recent party break-up returned to Yameen’s fold.

A the Maldives Investment Forum (MIF-2016) in Delhi, Vice-President Abdulla Jihad claimed that his country was among the best for investments, and promised legal protection for foreign investors. Jihad was Finance Minister under Presidents Waheed and Yameen, and was actively involved in the post-Nasheed regime negotiations with GMR, cancellation and arbitration. In Delhi, he also met with Indian counterpart, Hamid Ansari.

Under the Gayoom regime, too, Jihad had held important positions as an economic and fiscal administrator. His choice to inaugurate MIF-2016 at Delhi thus had both political and investor-related significance and meaning. It’s another matter that independent of the GMR deal with its multi-pronged controversies for all of which the Maldivian system alone cannot be blamed, the country’s banking and other investor-protection laws are at best in their infancy. No one knows it better than VP Jihad – and President Yameen, himself a former Finance Minister under half-brother Gayoom’s regime.

It’s thus that a local investor drawing funds from the public sector State Bank of India (SBI) invariably used to find loopholes in the local scheme and systems when it came to repayments. In the case of GMR, too, the absence of ‘due diligence’ was among the causes for the collapse of the Male airport contract. President Yameen too said as much during his Delhi visit in January 2014. At the Delhi MIF-2016, SBI expressed its willingness to help Indian investors wanting to enter the Maldivian industry and business scene in all the ways possible.

Under the Nasheed Government, Maldives had also approached India for assistance in drawing up a suitable legislation for protecting Indian bankers and investors from the vagaries and varying interpretations of the local laws by local courts. Incidentally, ‘foreign banks’ in Maldives, other than SBI, have mostly been looking at mopping up Maldivian savings and international money-transfers rather than facilitating and assisting local investors.

Before the current Delhi MIF, which was delayed due to intervening bilateral political tensions caused by the GMR and the ‘Judge Abdulla abduction case’ against President Nasheed, the latter had hosted Indian big business during a visit to Mumbai. In a way, GMR deal consolidation flowed from Mumbai, but overall the response of the Indian private sector to big-ticket investments in Maldives was not encouraging. The GMR controversy did the rest.

The MIF-2016 at New Delhi has thus come at a time when the Government has settled the GMR pay-out, as per the arbitration award, hopefully raising investor-confidence to some level. However, the current dollar-crisis could make a dent in this sphere as also act as an additional disincentive for the Indian budget-travellers during the upcoming Christmas-New Year season, like when the Nasheed regime ‘part-floated’ the dollar.

The efforts at the time were to promote Maldivian tourism in new destinations, after post-tsunami tourism was hit by the global economic melt-down. Encouraged by their Government, Chinese tourists made a beeline for Maldivian tourist resorts but their equally enthusiastic Indian counterparts were left to fend for themselves. This only widened a gap that had never existed earlier, the latter owing to the costs-driven disinterest in the two Asian countries/competitors.