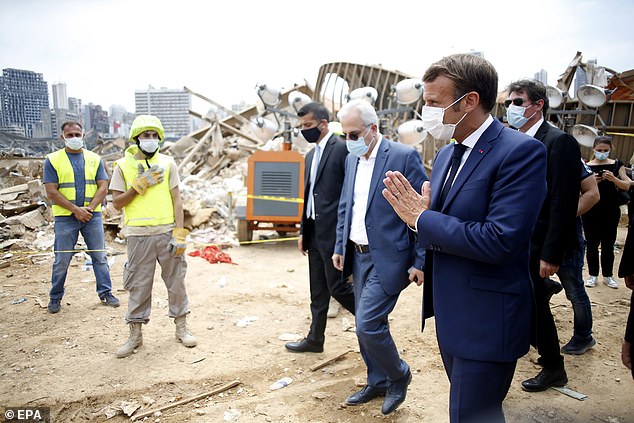 On Friday, October 2, 2020, the Muslim Jumma (Friday Congregation) prayer day,  French President Emmanuel Macron said this in a speech in the Western Paris suburb of Les Mureaux that “Islam is a religion that is in crisis all over the world today, we are not just seeing this in our country”. He further added that Islam was in crisis due to “an extreme hardening of positions” and in his speech, Macron also expressed his pious desire to” liberate” Islam in France from foreign influences by improving oversight of foreign financing of mosques, implying somewhat that Islam, Muslims, terrorism, and radicalisation are one and the same.

Interestingly, some regarded Macron’s speech positively and saw this is as an important step in creating “French Islam”, a view of the French political establishment’s ”house Arab” and a long time friend of President Macron, Hakim El Karoui. Karouni argued that “it was a speech against Islamism, but it was pro-Islam”. However, Yasser Louati, a French Muslim activist disagreed and tweeted saying, “The repression of Muslims has been a threat, now it is a promise”.  Louati further adds that Macron’s new measures “embolden” the far-Right and anti-Muslim Left at the same time. Many also accuse Macron of stirring up Islamophobic and racist feelings against Muslims at a time when Islamophobia is already on the rise in France.

Rim-Sarah Aloune, a French academic referring to the speech said “ No mention of white supremacy even though we are a country that exported the racist and white supremacist theory of the “great replacement” used by the white terrorist who committed the horrific massacre of Muslims in Christchurch, New Zealand. She was referring to the 2019 massacre at the Christchurch Mosques in New Zealand that killed 51 Muslim worshippers and wounded 49. The Australian white supremacist terrorist, Brenton Tarrant, cited French Islamophobic thinker Renaud Camus who according to him, inspired him to undertake his terrorist actions.

France’s Muslim hatred and its hypocrisies

In fact, hatred of Muslims by France’s Christians and their self-styled seculars is nothing new. It is the staple of everyday French political and social discourses at many levels, from the government, politicians, scholars, and the media. In this regard, it is also of interest to note that it was in Clermont in France on November 27, 1097, Pope Urban II, called for a crusade for the first time against the Muslims and ordered his fanatic murderous faithful to capture Jerusalem. So anti-Muslim hatred in France has a long history that stretches over a millennium.

Macron is not the first French President to promise new Islam, successive French presidents have done so since the 1980s. His policy is largely guided by ideology to foster an “Islam of Enlightenment” that is “compatible with the values of the Republic” without clearly defining what that will entail except that state would designate “certified Imams” for mosques, though the idea of state certification does not extend to  Christian clergies and Jew Rabbis. Double standards are the hallmarks of Western societies in general and their politicians, in France, this has taken the form of art.

Some would argue that such hypocrisies are the reflection of moral and political crisis that these societies are presently experiencing, exacerbated further by more than a decade of continuing economic crisis. This is nowhere more on display than in the US now, the leader of the Western world and France itself is on the march of a political take over by the far-Right party Front National led by Marine Le Pen. The recent polls suggest Macron and Le Pen are running neck to neck. Now Macron is doubling down on security (read “Islamist terrorism”) and identity (read spreading Islamophobia) issues, as his political arsenals to attract far-right voters in the 2022 presidential election.

Macron’s talk of the “Muslim Problem” is the latest example of mainstream politicians pandering to the far-right. In fact, Macron at present is more worried about Marine Le Pen than Islam, but the vilification of Islam is being used by Macron to enhance his credential among Le Pen’s Islamophobic supporters. However, the far-Right think tank such as French GRECE is well ahead in building a framework of Islamophobia that can be used both as a political tactic and political rhetoric than Macron can do. They have been having quite a bit of success in incorporating the tactics of the left such as the Gramscian concept of hegemony where they are articulating their strategy based on cultural power which they argue, must precede political power. Spreading of Islamophobia by the far-Right is the product of that endeavour to attain cultural hegemony to capture political power.

In this scenario of a rise in Islamophobia in France, how Macron – of which he himself is a part of – is going to “reorganise” Islam without undermining the “values of the Republic” is a puzzle. Unless he means something else, enshrined in the 1905 Separation of Church and State law his reference to the “values of the Republic” is quite clear and which underpins “laicite”,  that explicitly bars the state from interfering with private religious affairs.

Another intriguing aspect of Macron’s reformation of Islam is that he apparently is opting to partner with Egypt, Saudi Arabia and the UAE – homes of a certain brand of Islam that many Muslims believe is extreme and have problem with – to work to establish his brand of “French” Islam and yet the same Arab countries are France’s partners and collaborators in its war against Arab countries that are more moderate, namely Syria and Libya where war crimes are being committed daily with France’s complicity.

Another aspect of France’s double standard is that in a bid to overthrow the Assad regime, it has been instrumental in providing support and material help to the Islamist terrorist groups like ISIS and similar types of Islamist terrorist outfits in Syria. After destroying Libya, France is now backing the Libyan warlord Khalifa Haftar to wage war against the UN-backed government of Libya led by Fayez al-Sarraj based in Tripoli.

In accordance with the  Sykes-Picot pact which was rubber-stamped by the pliant and now-defunct League of Nations, the ”secular” France also created in 1920 a colonial state called Lebanon out of the greater Syria. In fact, Syria did not recognise Lebanon as a separate state until 2008.

France granted independence to Lebanon in 1943 but left behind an institutionalised  confessional state – “a form of consociationalism in which the highest offices are proportionately reserved for representatives from certain religious communities” – to safeguard the political and economic interests of the Maronite Catholics who were the local collaborators of the French colonial establishment in Lebanon. It must be also noted that 96 percent of French Christians are Catholic. Since gaining independence in 1943, Lebanon has politically remained a dysfunctional state due to the “secular” France’s entrenching of confessionalism into the body politic of that country. Not a great example of “laicite”, secularism – is it?

While Macron’s Friday speech was mocked by some on social media by some as a “Khutba” or sermon because it was delivered on the weekly Muslim communal prayer day, it is beyond joke. France in effect once again is evaluating its relationship with its Muslim minority who now numbers 6 million, constituting 9 percent of the population, the single largest Muslim population in any country in Western Europe.

A leading French Muslim activist described Macron’s project as “A comprehensive institutional framework to control and regulate Islam, with a clear repressive drive”.

As has been highlighted in a statement by 100 Muslim academics, activists, and others Macron, in fact, is constructing a “Muslim Problem” as they pointed out “ More than the necessity to fight terrorism as a criminal phenomenon, President Macron is to-day participating, with his speech, in constructing a Muslim problem, targeting believers and their faith”.

France like the US has made it a habit to making enemies for itself to justify its military interventions and aggressions, primarily directed at  Middle-Eastern Arab countries, to reshape them to suit their economic and political interests.

“We pity a ruler”

Macron is not facing up to the reality that France is politically, militarily, and more importantly economically facing at the present time. Increasingly, France is becoming an irrelevant country, geologically, that is. Macron’s bid to reshape the Middle  East far exceeds France’s capacity. In Europe itself where Jean Monnet, the Frenchman who helped to craft what has eventually to become the European Union or more precisely the club France, was intended mainly to safeguard France’s political, economic, and strategic interests from those of Germany, now precariously and quite ironically, has to hang on to the coat tail of Germany to make its presence felt.

Joseph Massad, Professor of Modern Arab Politics and Intellectual History at Columbia University, New York wrote in the Middle East Eye that “ Macron is not the first French ruler who wanted to “liberate” Islam. This is an old French “secular” tradition”. He further added France’s crisis with Islam is a legacy of 200 years of French colonial brutality. He also pointed out that by the very start of the 20th century as the French concern about their “crisis” with Islam increased with the acquisition of colonies with large Muslim population, the colonial quest for knowledge on Islam became necessary to understand its (Islam) future in the 20th century. This is what Edward Said detailed in his book,  Orientalism where he showed how colonial necessity drove the study of the orient in general and Islam in particular in the West with the sole objective to dominate and not appreciate the culture of the colonised people. This was the root of the emergence of the academic “Orientalists Industry” in the West.

However, with all the understanding of Islam dished out by mostly islamophobic  French orientalists and French colonial-settler  (pied-noir)  Arabists in North Africa, Professor Massad opined “the project of transforming Islam into something European Christianity and French laicite can tolerate continues afoot in 2020, but with unsatisfactory results as far as Macron is concerned, especially as France’s funding of Jihadist groups in Syria has not so far brought about the French-sought after Islam”.

Now Macron is facing a much bigger problem at home than his problem with Islam. French economic growth has been stagnant for more than a decade. Unemployment has been stuck between 9 percent and 11 percent. The deep gap between the rich and poorer citizens is on the rise. France’s richest one percent owns 20 percent of the wealth, yet the median monthly wage is about US$1,930 which indicates half of the French workers are paid less than that. The declining living standards and purchasing power have morphed into collective national despair as was reflected in the Yellow Vest movement.

The situation has, in effect, been worsening in the aftermath of the Global Financial crisis of 2007-08 which also created a serious ongoing debt crisis. The slowdown of growth has made it much harder to deal with the other main challenge, the very high level of unemployment. To further worsen the situation, the coronavirus pandemic has created the worst economic crisis in decades causing havoc within the country.

Macron’s image being the president for the rich does not help to garner popular support in such a critical time in the country’s history which is marked by economic stagnation and rising unemployment and poverty. He knows that support for him has been withering. His desperate bid to shore up popularity by hanging on to rhetoric that does more harm than good to him individually and France as a whole that a leading Muslim scholar who felt sorry for Macron, summed up the situation this way “ We pity a ruler who is still living in crisis and the spectre of religious wars of the middle ages”.

Muhammad Mahmood is an economic and political analyst. muhammad.mahmood47@gmail.com