Last chapter of an enfeebled democracy? 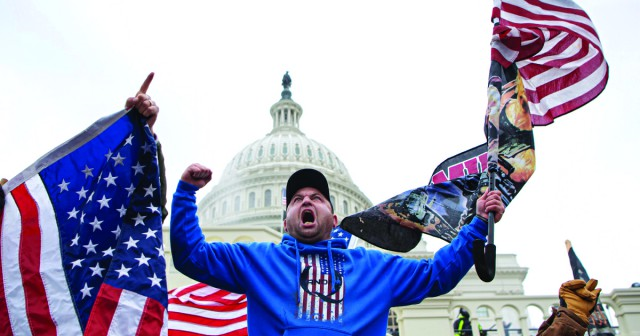 I began writing this on Tuesday, the day that the two runoff elections for the two senate seats in Georgia were being held, and a day before President Trump’s latest, and probably final, assault on our democracy takes place. On Wednesday, Trump’s disciples in Congress will challenge the already-certified votes of the states as they are ritually recorded by the congress, a ritual that has until tomorrow taken less than an hour since the election of 1876. In the end, there is almost no likelihood that it will succeed in changing the results of the election, but it will be a sort of symbolic victory, not so much for Trump as for authoritarianism.

The good news from the Georgia election will mean that Joe Biden will have the opportunity not only to achieve greatness but to put the US back on track to lead the democratic-liberal countries around the world and perhaps retard the growth of authoritarianism that has darkened our lives for about two decades. The victory of the two Democratic candidates, a minor miracle to which Mr. Trump added his magic power to help his opponents and hurt his own party, gives Biden’s Democratic Party control two of the three branches of the government, the Legislative Branch (the House of Representatives and the Senate) and the Executive Branch, and in so doing will also give it a lever on the Judicial Branch, with its majority of Conservative judges, should it endeavor to block important pieces of the Biden reform and rebuild agenda.

But one counter-argument to this rosy scenario is that no matter whether the Democrats have control of both houses of Congress or not, the anti-democratic, authoritarian path that Trump has set himself on is a one-way street. Failure in his attempt to overturn the election, which is as close now to inevitable as anything in politics ever is, will not convince him to retire to Florida and dodge the legal jeopardy he faces once he leaves office. It will instead drive him to seek the political equivalent of resurrection and retake the office in 2024. His constant refrain of a stolen election and massive voter fraud, though totally false, is taken as gospel by his faithful base, and his insistence on a Biden government as illegitimate will drive the Republican party and be its slogan for the next four years.

But on Wednesday, January 6, learning of the democratic victories in Georgia, we must judge the rosy Scenario described above in a historical context. The kind of political division we see now in the US has been seen at least once before, in the 1850s over slavery. The important political event was the rearranging of the political landscape through the breakup and remaking of political parties because of the difficulties most had in coming to grips with and developing a coherent position on the burning question of slavery. The major opponent of Jefferson/Jackson Democratic Party, the Whigs, which had been a successful competitor, fell apart completely in 1854 over its inability to find a coherent position on that issue. Its successor was the fiercely anti-slavery Republican party of Lincoln. Thus, two parties holding fundamentally contrary beliefs about an issue on which no democratic compromise was possible. I believe that our current division is more abstract and difficult to capture in words, but similar in its difficulty; it is fundamentally over democracy and the inherently contradictory nature of the two major political parties. At the heart of our division is that one party, the Republican, in a two-party system, no longer believes in democracy, but only in power. And now it seems possible that a moment has arrived in which that party may fracture, or disappear entirely, and a second party, believing in democracy may rise. So I raise this question: is this a replication of 1854? Perhaps, as Mark Twain is reputed to have said, “history doesn’t repeat itself, but it often rhymes.”

It would certainly be an ironic rhyme if the Republican Party collapsed or fractured as a result of Trump’s obsessive campaign to overturn the election results. But his insistence on loyalty to his every whim, which is in itself, proof of his authoritarian nature, seems likely to rupture the party. And now he has put up Senate and House Republicans to oppose the acceptance of the votes of three states and to call for a commission to “audit” the votes in those states—a stalling tactic since those ballots have been audited and reaudited—but to what end. Just to put off being known as a loser, I guess. However, Trump did not turn the Republican Party against democracy; it has a long history of being anti-democratic. Only one Republican President in the past 30 years has won the popular vote; the party is dependent on the electoral college to compete on the national level. It depends on voter suppression for its success, mostly in the South, which has been it base since the 1960s. It is, almost by definition a minority party, dependent on such non-democratic methods to compete with the more inclusive Democratic Party.  Nor did he murder the party with his outlandish demands for loyalty to false and conspiracy theory narratives; the party would have committed suicide by acceding to his demands.

Today’s joint session also makes us look into the only other time this usually Pro-forma meeting of the full Congress actually chose the President. Are there differences from the joint session of 1876 that required that session to depart for the usual Pro-forma 30-minute tabulation of the electoral college votes that do not obtain for the present session? The answer is yes. That year because of a very close and highly contested election, and significant evidence of voting irregularities and voter suppression, two states could not certify their electoral college votes. The election ended in a tie and neither candidate had the required number of electoral votes to win the presidency. The Congress established a commission to audit the elections, but while the commission sweated over a resolution, a back-room, politically shoddy deal was made. The only virtue of this deal was that it was reached without violence, although it resulted in massive violence in the ensuing century. The Republicans began their long slide into an authoritarian party by agreeing to end Reconstruction in the Southern states if they were given the Presidency. Thus, the Republican Party abandoned the former slaves it had freed 11 years earlier for power, and the Ku Klux Klan took over the South and with excessive violence or the threat of it, basically restored the status quo antebellum, repressing African Americans and introducing segregation, the Jim crow South, for about 90 years. This is probably the most shameful compromise in American history.

The joint session today produced the second most overt and shocking single political act of sedition in US history after the secession of the Southern that accompanied the news of Lincoln’s election in 1860. It will rock US politics well beyond this election and could also lead to the rupture or dissolution of the Republican Party. Unlike in 1876, there was no constitutional reason for any diversion from the ordinary Pro-forma meeting of 30 minutes. All 50 states and the District of Columbia had submitted on time certified electoral college votes resulting from their elections on November 3. However, President Trump obviously planned to use the occasion as the coup de grace of his obsessive and surreal campaign to overturn the election he had clearly lost and to use an excuse for blocking the acceptance of the certifications of three states on this occasion, and to use the totally discredited lies, assertions of fraud, and conspiracy theories, which he had already used to file over 60 cases in Federal and State courts, all of which had been rejected or dismissed out of hand. It was nothing less than an attempted coup d’etat, and a coup enabled by violence.  He recruited a number of Republican Senators and House Members, to carry the can on this. He called for a massive demonstration of support in Washington today by his base. He spoke for over an hour to the massive crowd that answered his call. The crowd, whipped up by the speech, as always using dog-whistle phrases to promote violence, stormed the US Capitol a couple of hours later, invading Senate and House chambers, necessitating the evacuation of the Capitol and surrounding buildings, and delaying, but not stopping the process of approving the Electoral College vote. Make no mistake, those Republican Senators and House Members that enabled Trump by supporting this effort to destroy democracy cannot escape their share of the blame for the violence. I have little detail; that will come out later. The Senators and House Members have disappeared and are said to all be safe, and the TV tells me that they intend to stay where they are tonight until their task is finished. They are determined that unruly mobs cannot stop or impede the work of the government. My country has clearly been turned by its President into a banana republic, and its citizens are shamed. This desecration has led me to make this a far longer paragraph than I intended, but the events of today in Washington are remarkable evidence of the failure of politics in our supposed democracy, and definite proof that Mr. Trump has been for four years unfit for the Office of President. We should all be thankful that he will leave office officially in 14 days.