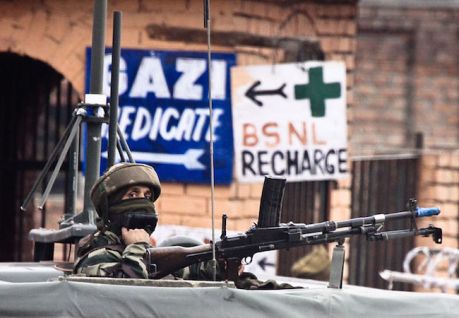 Decades passed the constant Kashmir conflict continues to simmer. The current political alienation and the development of new perceptions among the masses is an apt evident of the failure of PDP-BJP policies in the state of Jammu and Kashmir. And on the other hand, the political arrogance of Narendra Modi led BJP government at the center profoundly failed to address the deep and prolonged political aspirations of the people of the Kashmir region which doubtlessly worsening the situation with each passing day. Moreover, it is pertinent to note here that it was Peoples Democratic Party ( one time soft-separatism party) who sought votes during election campaigns with the promise to bring peace in the region, power projects , talks with Hurriyat and Pakistan , safeguarding article 370, revoke of AFSPA, freeing of political prisoners, accountable and institutionalized governance to people of the state but right now what the people of the state are witnessing is PDP’s “Political deceits and historical betrayals”.

The festering and gruesome situation in the post-2016 after the killing of widely known tech-savvy Hizb ul-Mujahideen commander Burhan Muzaffar Wani have made it clear that another political turmoil in the region would be more drastic and furious if the dispute remains lingering. India being the champion and the largest democracy of the modern world should address the political aspirations of the people of Kashmir and should adopt peaceful measures to solve the dispute permanently. Sooner than later, the bloody Kashmir conflict deserves a meaningful and acceptable solution otherwise the days aren’t far when both the nuclear-armed countries India and Pakistan will go into another war on Kashmir because the region with abundant resources is a drain to both of them.

Let me tell, more than 27 years have passed in these bloody years nothing has been achieved. If we (India, Pakistan and the Kashmiri people) have achieved anything that includes confrontations, surgical strikes, and border stand-offs across Line of Control (LoC) and International Border (IB) between India and Pakistan and mass killings, mass graves, curfew, protests, and disappearance in the Kashmir region. Moreover, what presently happens in Kashmir and why these educated and well to do the youth of Kashmir are joining armed ranks is because of the political arrogance of India and Pakistan. More the military measures India will apply in Kashmir more the youth of Kashmir will upsurge.

As political analyst Pratap Bhanu Mehta rightly states in the Indian Express that “Our political instruments are hallowed and failed, there is a deepening death wish in the state.”

It’s true that the people of Kashmir are feeling disgruntled with the mainstream and other kinds of politics because the policies are full of deceits and broken promises. The young youth of the valley are joining militant ranks bears this witness that the state institutions that are supposed to deliver justice and freedom are mute, faithless and unaccountable. The denial of justice and the extra use of force in the Kashmir region is one of the factors that are forcing the youth to choose the violent path.

I being the citizen of this troubled land believe that the people of Kashmir want to live with dignity, freedom, peace, and respect. They want to live like other people of the Indian states. They too are humans- of course, they are like the other people of the world. Their minds are brimmed with talent, innovative ideas and thoughts.
Undoubtedly, the situation is worsening day by day. New Delhi and Srinagar, New Delhi and Islamabad show no interest what the valley is going through. Without an iota of doubt, it will be a grave mistake at the hands of those who are in power from Capital to State hoping that the things will settle with its own. Instead of using aggressive strategies and military might over the people of the region, there should be what we call soft policies through which the people in power would understand and acknowledge the degree of alienation and deception among the people of the region. Indeed, New Delhi should adopt new policies and a good human approach to Kashmir issue. If the things remain unabated and unsettled, then the next upsurge is inevitable in the Kashmir region. Today if the stakeholders in Kashmir are willing to talk with New Delhi then New Delhi without giving it a backstage should listen and try to negotiate over the issue. Because keeping in view, the current situation of Kashmir valley and how the young, educated youth are joining militant ranks and how in large number masses are participating in the militant funerals is an open eye to New Delhi to start talks with the people of Kashmir including Pakistan. Sooner than later, the prolonged dispute must be solved by implementing peaceful and meaningful measures.

As S. Sudhakar Reddy, General Secretary CPI rightly puts that “Kashmir should be solved before it is too late. Only dialogue will help. We tried a military solution, but it did not work. The solution should be political, not military”.