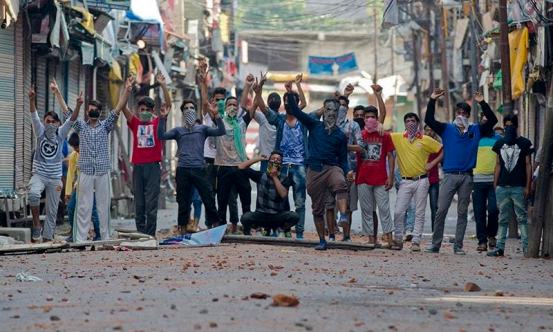 International humanitarian law (IHL) is applicable on both international armed conflict and non-international armed conflict. Given the Kashmir issue, this law, being the major component of international law, has a wider scope and germane applicability on India despite well-staged encounters and operation by its armed forces. Status of Kashmir and associated controversies cannot be amalgamated with power abuse and unabated human right violations Kashmiri people suffering from. Abuse of power by Indian forces while treating Kashmiris and political status of Kashmir must be seen through a separate lens.

It cannot be substantially rebutted that independence movement in Kashmir is indigenous and all efforts to crush this movement by Indian forces axiomatically results in violent conflicts. The height of the conflict can be estimated through these facts and figures. According to different Kashmir Media Services, Indian forces have caused the 94,363 killings in Kashmir from the year 1989 to 2017. Astonishingly, 8,043 killings out of total killings were custodial. About 134,387 Civilians were arrested and 106,055 structures burned or destroyed. Molested or rape cases recorded around 10,175 in numbers. According to a report surfaced, state’s northern districts are filled with unmarked graves of Kashmiris.

Human Rights Watch conducts regular, systematic investigations of human rights abuses in some sixty countries around the world. It addresses the human rights practices of governments of all political stripes, of all geopolitical alignments, and of all ethnic and religious persuasions. Human Rights Watch for Asia also upheld these reports on its web-portal. Conflict in Kashmir is a real picture of rough treatment by Indian security forces incorporating the massive violations of IHL.
Geneva Convention of 1949 set the basis of IHL which was passed by United Nations notwithstanding international mandate. India became the party to this convention in 1950. This convention has the bindery obligation to all states which are party to this convention. Geneva Convention is a series of treaties that provided the set of rules and articles to regulate the armed conflict. In clause 1 of Article 3 of Geneva Convention, common to all four conventions, it is clearly mentioned that “Persons taking no active part in the hostilities, including members of armed forces who have laid down their arms and those placed hors de combat by sickness, wounds, detention, or any other cause, shall in all circumstances be treated humanely, without any adverse distinction founded on race, color, religion or faith, sex, birth or wealth, or any other similar criteria”. Contrary to the clause, Indian law enforcement agencies continued to provide inhuman treatment to civilians in the form of massive crackdowns and extrajudicial killings.

In clause 2 of Article 3, wounded and sick shall be collected and cared for (i) An impartial humanitarian body, such as the International Committee of the Red Cross, may offer its services to the Parties to the conflict. (ii) The Parties to the conflict should further endeavor to bring into force, using special agreements, all or part of the other provisions of the present Convention.

Furthermore, India never allowed any humanitarian organization to enter in Kashmir valley to provide their services. International Committee of Red Cross (ICRC) is a unique body having the mandate under international law to work in conflict zones. ICRC provides the medical services and other various services to the wound, sick and affected people of armed conflict. ICRC deposited several requests to India authorities seeking permission to enter Kashmir. But, the government of India never permitted ICRC to enter therein, evidently violating the IHL. Moreover, United Nations Military Observer Groups in India and Pakistan (UNMOGIP) was also denied the entry by the Indian government to prevent these violations to be surfaced.

The international community should play its role to vitalize the international humanitarian law. Kashmir issue must equally be focused. It should be the matter of global concern. Otherwise, it may dysfunction international regimes supported by pillars of International law and international mandate. It may existentially lead to a full-blown crisis between two nuclear powers. Moreover, immediately there is a need for mandatory periodical inspection in Kashmir by an independent authority like ICRC, UN to bar the human rights violations.